Montgomery County is noted for its quartz crystal deposits, the rugged beauty of the Ouachita Mountains and its sparkling, clear waters. Every year, thousands enjoy hunting, hiking, observing nature, fishing, and participating in water sports on Lake Ouachita, Arkansas’s largest lake with 48,300 surface acres, and the Ouachita, Caddo, and Little Missouri rivers; the latter drops thirty-five feet per mile in its twenty-nine-mile journey through southern Montgomery County.

Pre-European Exploration through European Exploration and Settlement
Montgomery County has the most registered sites on the Arkansas Archeological Survey site database. Stone spear or dart points indicate that people of the Dalton culture (ca. 8500 BC) and Tom’s Brook culture (ca. 4500 BC) inhabited the area in the Early and Middle Archaic period. Sites with houses, mounds, and cemeteries on the Caddo River at Caddo Gap and Norman, and those on the Little Missouri River, verify that Caddo Indians lived there in the thirteenth through fifteenth centuries, their society centering on farming and pottery making. Site testing on Lake Ouachita revealed artifacts dating to the Middle and Late Archaic, Fourche Maline, and Caddo periods. Modern historians no longer believe that Spanish explorer Hernando de Soto fought the Tula Indians in Caddo Gap, but the inscription on a nine-foot Indian statue erected there in 1936 by the Arkansas History Commission (now called the Arkansas State Archives) holds to an earlier viewpoint.

Louisiana Purchase through Early Statehood
The first recorded white settlers arrived in 1812. Kentuckians Martin and Mary Belle Collier settled near present-day Caddo Gap. Collier became friends with nearby Indians lured by his fiddle’s “heavenly sound.” When Arkansas gained statehood in 1836, even migrating Indian tribes were gone; but individuals had chosen to become part of the social structure of the Anglo-American frontier and married early pioneers—some even denying their Indian heritage—before and after settlement in Montgomery County. Granville Whittington arrived in 1835, chopping out a road along the ridges from Hot Springs (Garland County) to his farm home across the south fork of the Ouachita River about a mile north of the community of Montgomery. In 1837, he opened a general store that drew customers from the surrounding wilderness. In June 1842, he opened the Mount Ida post office from his home, named after a mountain in his native Boston, Massachusetts. Farther west on the Ouachita River, the community of Oden had its beginnings in 1849 when a wagon train wintered there and decided to stay.

Montgomery County, named for General Richard Montgomery, who died during the Revolutionary War, was included in land claimed by Spain and then France before becoming American property in 1803 as part of the Louisiana Purchase. In 1812, it became part of Missouri Territory, in 1813 Arkansas County, and in 1818 Clark County. Arkansas was designated a territory in 1819, and Hot Spring County was created out of Clark County in 1829. Montgomery County and its county seat, Montgomery, were organized December 9, 1842, out of Hot Spring County. The earliest surviving records of Montgomery County are dated July 1845. From 1842 to 1850, Montgomery remained the county seat, but the town’s name changed to Salem in July 1850, and finally to Mount Ida, after Whittington’s local post office, in October 1850. Mount Ida incorporated in 1854. In 1889, more than two-thirds of the county was still public land. Political maneuvers in 1873 and 1917 gave the Bear, Cedar Glades, Hickory Station, Crystal Springs, and Buckville communities to Garland County. Montgomery County’s current borders were finalized in 1925.

Civil War through Reconstruction
Most Montgomery County citizens favored the South during the Civil War. Mount Ida’s John Lavender and John Simpson formed a company of some 100 men, but after the war, only about a dozen returned to the area. While men fought, women and children worked the farms; soldiers from both sides raided homes.After the war, Union and Confederate veterans moved to Montgomery County, homesteading near springs and creating homes, schools, and churches. By 1884, Oden’s population of sixty had built a steam saw, a cotton gin, and gristmills.

Post Reconstruction through Early Twentieth Century
With the Missouri Pacific Railroad’s arrival in 1905, Caddo Gap and Black Springs thrived. The railroad, constructed to transport timber, was to have joined tracks at Mena (Polk County) and ultimately Fort Smith (Sebastian County), but a railroad right-of-way dispute in 1907 stopped the tracks short of Black Springs. Immediately, Womble, incorporated in 1910, sprang up where the tracks terminated. Also in 1910, the county population reached its highest and included many sawmill camps. By 1920, Womble (renamed Norman in 1925) had surpassed Mount Ida in population—420 to 298. In 1918, the Caddo River Lumber Company had begun a survey for building a railroad out of Womble, but it took four years for the fifteen-mile main line to be completed to the Maudlin logging camp, the county’s logging center. In 1936, a commissary and post office served incorporated Mauldin’s 300 people, but in 1937, almost overnight, Mauldin was dismantled and carried off by rail. The lumber company, picking up its tracks as it left, had depleted the virgin timber; this, together with the Depression, had a devastating economic impact on the county.

President Theodore Roosevelt had created the Arkansas National Forest in December 1907. In 1926, the renamed Ouachita National Forest’s priorities included curbing timber theft and wildfires and setting up ranger outposts with telephones. Stands of trees were upgraded by enforcement of rules for selective cutting. Sixty-three percent of the county ultimately became national forest land as bankrupt farmers and lumber companies sold their land. The Little Fir and Big Fir communities died but have been resurrected as popular recreation areas on Lake Ouachita.

During the Depression, many families left to find work. Locally, the Civilian Conservation Corps (CCC) and the Works Progress Administration (WPA) built public buildings and park shelters. Collier and Crystal Springs recreation sites, Womble District Administration House No. 1, and the Norman Square are CCC contributions on the National Register of Historic Places. Also on the register are Caddo Valley Academy in Norman, Mount Ida’s Cities Service Filling Station and Esso Service Station, the Reeves-Melson House, Lum and Abner’s Jot ’em Down Store and Museum, and the Montgomery County Courthouse, which holds the complete records from 1845 to the present.

World War II through Modern Era
People continued leaving Montgomery County during World War II—the young men to fight and others to find employment, many at war plants. Some returned with broadened outlooks on life and money in their pockets. With patriotism still high, returning veterans were encouraged by Sid McMath, a war hero running for prosecuting attorney in Garland and Montgomery counties, to get involved in politics; known as the “G.I. Slate,” local G.I. candidates won every public office race in Montgomery County in 1946.

George A. Jackson Jr. had left Mount Ida with his parents during the Great Depression; he used the G.I. Bill to further his education. Returning to Mount Ida in 1954, he became one of the first poultry farmers and was instrumental in getting farmers throughout the county to irrigate and fertilize farmland to increase crop yield. By combining cattle and chickens (and later pigs), farmers were finally able to make a living off the land. By the 1960s, the county’s population had stopped its descent, aided by the influx of senior citizens retiring near Lake Ouachita.

The Arkansas Research and Test Station site was one of two stations constructed in the United States in the early 1960s capable of transmitting communications to satellites orbiting the Earth. Constructed in 1965–66 and in operation until 1969, it was added to the National Register of Historic Places on September 21, 2017.

Most miners lost money speculating on silver, gold, and copper, but the first quartz mining claim in 1904 was a portent. Mining increased during World War II, because suitable quartz for oscillators (radio communication) was found in Fisher Mountain. Exploration proved that crystal veins were present at any depth in the right rock type. Mount Ida, in the middle of one of the few areas on earth having quartz crystal worth mining, is touted as the “Quartz Crystal Capital of the World.” In 1987, some 44,000 pounds were produced. The current mining of 6,000 pounds a year is geared to tourists, who are the main customers. 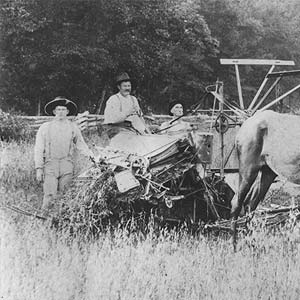