In 1967, the Arkansas legislature created the Arkansas Archeological Survey (Act 39), the first statewide coordinated archaeological research and public service organization in the country. The survey’s mission is to study and protect archaeological sites (both prehistoric and historic) in Arkansas, to preserve and manage information about those sites, and to communicate that information to the people of Arkansas. The Arkansas Archeological Survey is part of the University of Arkansas System.

This interest in Arkansas’s archaeological past originated from Representative John Bethel, who had a life-long interest in archaeology, particularly around his Des Arc (Prairie County) home. In 1959, he had also sponsored the creation of an archaeological laboratory at the University of Arkansas (UA) in Fayetteville (Washington County), but no funds were forthcoming from the legislature at that time. At this same 1959 legislative session, Bethel sponsored a bill that protects all archaeological sites on state land, with penalties for any disturbance (Act 58).

The survey’s coordinating office on the UA campus in Fayetteville houses the offices of the director, the state archaeologist (a position created by Act 39), the survey’s registrar, the fiscal officer, the publications staff, and programs for sponsored research, computer services, and statewide outreach. It is also the central repository for all information on prehistoric and historic sites, projects, and publications in Arkansas that has been recorded by any archaeologist working in the state. As of the end of 2005, there were just over 40,000 sites, approximately 5,000 projects completed, and 7,000 publications and unpublished reports on record in the survey’s registrar’s computerized databases.

The coordinating office building also is the location of the University of Arkansas collections facility, a combined curated area specifically designed to house both survey and university museum holdings. The survey also acts as the repository for archaeological collections and records originating from state and federally funded archaeological projects in Arkansas.

The main mechanisms for carrying out the survey’s mission, however, are eleven research stations around the state (located at eight state universities), two state parks, and the community of Blytheville (Mississippi County). Each station has a full-time archaeologist, and several have a research assistant as well. Three research stations were established in 1967—at Arkansas State University (ASU), Arkansas Agricultural, Mechanical and Normal College (now the University of Arkansas at Pine Bluff), and Henderson State Teachers College (now Henderson State University). Four additional stations were created on July 1, 1968—at Arkansas Agricultural and Mechanical College (now the University of Arkansas at Monticello), Southern State College (now Southern Arkansas University), Arkansas Polytechnic College (now Arkansas Tech University), and Arkansas State Teachers College (now the University of Central Arkansas). Since then, four more stations have been established: at Plum Bayou Mounds Archeological State Park in Scott (Pulaski and Lonoke counties) in 1977, at Parkin Archeological State Park in Cross County in 1990, in Blytheville in 1998, and at the University of Arkansas at Fort Smith in 2005. The archaeologist stationed on a university campus teaches two anthropology courses in one semester (except currently at the University of Arkansas at Fort Smith, where the archeologist does not teach), doing research and public education the rest of the time. The station archaeologist and research assistant are the contact points for queries and information about the archaeology for several counties surrounding their home station, and they assign numbers for each site in the statewide recording system. They respond to questions, visit with landowners who have sites on their properties, give talks on local archaeology and their own research, and respond to emergencies when site disturbance is reported, whether it seems to be deliberate vandalism or is a discovery in the course of construction or farming. The archaeologists at the two state parks do research on the sites that the state is protecting (Toltec in Lonoke County and Parkin in Cross County), providing information for Arkansas State Parks to use in interpretive programs for the public. At Blytheville, in cooperation with the city, the archaeologist does primary research on a large prehistoric site owned by the city (the Eaker site), provides the city with text for its brochures on historic trails, and advises the city and the people of Blytheville about the potential for development and interpretation of the Eaker site.

The survey publishes information about all this research in four series: the “Research Series,” “Research Reports,” the “Popular Series,” and “Technical Reports.” The survey provides a free CD for teachers of Arkansas history—grades kindergarten through twelve—containing information about Arkansas’s past. This and other information is available on the survey’s website. The Arkansas Humanities Council loans several survey-created exhibits about Arkansas history and prehistory to schools and libraries. 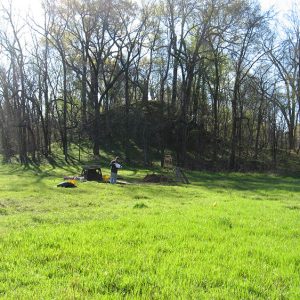