The University of Central Arkansas (UCA) has been one of Arkansas’s leading institutions of higher education for more than 100 years. Beginning as a normal school (teacher’s training institution) with approximately 100 students in 1908, UCA has become a comprehensive PhD-granting institution with 11,350 students in 2017.

UCA was created by the passage of Act 317 of 1907 as Arkansas State Normal School, the only institution of higher learning in the state created for the sole purpose of teacher training. On May 15, 1907, acting governor X. O. Pindall appointed the first board of trustees. Several cities submitted bids for the school, including Fort Smith (Sebastian County), Benton (Saline County), Quitman (Cleburne County), Russellville (Pope County), and Conway (Faulkner County). The City of Conway submitted the winning bid by offering the choice of three tracts of land and $51,753 in cash, along with other inducements. Operations at Arkansas State Normal School began on September 21, 1908.

The first president was John James Doyne, formerly the state superintendent of schools. He served as president until August 31, 1917. The first degree offered by the school was the Licentiate of Instruction. This two-year degree was the equivalent of a professional license. The curriculum for the Bachelor of Arts was not created until 1920. The school grew rapidly and went from approximately 100 students in 1908 to 200 students in 1909. Before Doyne left office, enrollment reached 441 students in 1916.

Doyne’s successor was Burr Walter Torreyson, previously state high school inspector for Arkansas. World War I’s impact on the school’s enrollment was significant. In the fall of 1916, 441 students were enrolled in classes, but in the spring of 1918, 302 students were enrolled, and only twelve of them were men. However, the student population made large gains after the war, growing to 871 by 1925.

Torreyson left the presidency on July 1, 1930, and was succeeded by Heber L. McAlister. At the time, ASTC was made up of five traditional brick-and-mortar buildings and two frame buildings. When McAlister resigned in 1941, there were fifteen major buildings on campus thanks to President Franklin Roosevelt’s New Deal programs and McAlister’s relentless pursuit of government funds. The program that most impacted the college was the Public Works Administration (PWA), which funded projects by a combination of grants and low-interest loans. The first PWA project completed in Arkansas was Wingo Hall at ASTC in October 1934.

In 1930, when the effects of the Depression were being felt in Arkansas, enrollment stood at 528 students, with the low point coming in 1933 with 478 students. The enrollment gradually increased from 565 students in 1934 to 745 by 1939. Despite the Great Depression, President McAlister presided over one of the biggest periods of growth (in regard to the physical plant) the school has ever witnessed.

McAlister was forced to resign when his National Guard unit was activated. He was succeeded by Dr. Nolen Irby on September 1, 1941. Student enrollment soon suffered due to the male students dropping out of college to enter the draft. When Pearl Harbor was attacked, 764 students were enrolled in classes. By the 1943–44 school year, only 289 students were enrolled.

During the war, ASTC became a temporary home to various branches of the armed forces. The Naval Cadets, Army Air Corps, Army National Guard, and Women’s Army Corps (WAC) turned the quiet college campus into a veritable military base. The WAC had the largest contingent of personnel, with 1,800 women being trained from March 1943 to March 1944. So many military personnel were on campus that Governor Homer Adkins wanted to change the name of the institution to MacArthur Military College. After the war ended, the size of the student body quickly increased to 1,400 by 1947.

Silas D. Snow succeeded Irby and became president on July 1, 1953. Snow served in this capacity for twenty-two years and was the longest-serving president in the history of the college. He presided over two name changes of the college. In January 1967, ASTC became State College of Arkansas, and on January 21, 1975, the institution became the University of Central Arkansas.

Snow oversaw many changes at UCA, including the establishment of the Reserve Officers’ Training Corps (ROTC) in 1968, integration of the student body in 1956, integration of the faculty in 1969, creation of the campus radio station in 1966, and construction of twenty major buildings and several smaller structures. The size of the student body grew steadily, going from 1,085 in 1953 to 4,838 in the fall of 1974. The first graduate program at UCA was the MS in education. The curriculum for this degree was first offered in the summer of 1955.

The sixth president of UCA was Dr. Jefferson Farris Jr., a member of the UCA faculty since 1961, who took office in 1975. In 1982, UCA established the first honors college in the state, the Norbert O. Schedler Honors College. The University Scholars program was established in 2018. UCA’s Torreyson Library (now known as UCA’s Archives and Special Collections) became the first fully computerized library in Arkansas in 1986. When Farris he resigned in 1986, enrollment had reached 6,254. Interim president Bill Pate served until December 31, 1987, at which time another interim president, Dr. H. B. Hardy Jr., took the reins, serving until March 31, 1988.

The seventh president of UCA was Dr. Winfred L. Thompson, who served from April 1, 1988, to December 21, 2001. He is credited with the biggest building program in UCA’s history and presided over $125 million in new construction and renovation of existing facilities. During his presidency, UCA received three doctoral programs: a PhD in school psychology and a PhD and DPT in physical therapy. UCA has long been a leader in the field of physical therapy, not only in Arkansas but nationally as well.

Even though UCA made significant progress in many areas under President Thompson’s leadership, his administration was censured in 2000 by the American Association of University Professors (AAUP). This was the second time UCA had experienced AAUP censure; the first time was in 1963 during the administration of President Silas D. Snow.

UCA’s eighth president was Lu Hardin, former director of the Arkansas Department of Higher Education. Hardin presided over a period of unparalleled growth in UCA’s student body. When he arrived in September 2002, 8,500 students were enrolled in classes; five years later, more than 12,600 students were taking classes at UCA. Hardin also ushered in a new era of athletics at UCA, with UCA sports teams now competing in Division I. In 2003, UCA was removed from the AAUP censure that occurred during the Thompson administration. During Hardin’s presidency, UCA became the first public institution of higher education in Arkansas to achieve a graduation rate in excess of fifty percent.

At the end of August 2008, Hardin submitted his resignation to UCA, following controversy over a $300,000 bonus that was not at first made public. On March 7, 2011, Hardin pleaded guilty to charges of wire fraud and money laundering related to the bonus. Other controversies followed his 2008 resignation. News stories reported irregularities involving scholarships and discounts given to some students, and diversion of money from public to private funds and from non-athletic to athletic funds. It was also reported that the school had borrowed money without state government approval. Tom Courtway served the university as interim president until July 1, 2009, when Allen C. Meadors became UCA’s ninth president. However, Meadors resigned on September 2, 2011, after controversy arose regarding food services contractor Aramark’s offer to pay $700,000 toward renovation of the presidential home. Reported initially to the Board of Trustees as a gift, this amount was later revealed to be contingent upon Aramark receiving a contract extension with the university. Tom Courtway was again appointed interim president after Meadors’s departure and, on December 12, 2011, was named president of UCA. In November 2016, Dr. Houston D. Davis was chosen as president of UCA, beginning his service in January 2017.

In 2012, a new 200-person student amphitheater consisting of a grass area, stage, and concrete seating was completed. The amphitheater is surrounded by the UCA Alumni Association Legacy Walk. In 2014, UCA opened its renovated and expanded Health, Physical Education and Recreation (HPER) Center and broke ground on the UCA Greek Village.. By 2020, students could choose from more than 160 degree and certificate options, which include undergraduate, graduate, and doctoral programs. 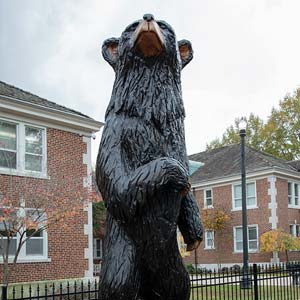