Conway, the seat of Faulkner County, is a well-known center of education in central Arkansas. It is home to Hendrix College and surrounding historic district, the University of Central Arkansas (UCA), and Central Baptist College.

Louisiana Purchase through Early Statehood
The Cadron Settlement, approximately five miles west of what is now Conway, was originally an early French trading post on the Arkansas River. Many of the original American settlers were veterans of the War of 1812 who were granted highly speculative “preemptive” land rights in exchange for their prior military service. These allowed them to claim land before patents were issued by the U.S. government. The settlement became the county seat of Pulaski County in June 1820, but the seat was relocated to Little Rock (Pulaski County) the following year, aiding in Cadron’s decline. Naturalist Thomas Nuttall visited Cadron in 1819 and described a tavern and a settlement of a few families. In the spring of 1834, many Cherokee emigrants, under the command of U.S. Army lieutenant Joseph W. Harris, died of cholera and measles near Cadron Creek while traveling from Georgia to Oklahoma along the Trail of Tears. By the 1850s, Cadron had vanished.

Civil War through Reconstruction
By the dawn of the Civil War in 1861, the area around Conway, like much of the nation, was divided in sentiment. Many in the area joined the Confederate Tenth Arkansas Infantry. Organized at Springfield (Faulkner County) and led by Colonel Thomas D. Merrick of Little Rock, the unit consisted mainly of farmers largely from Conway County (which then included present-day Faulkner County, as well as Perry and Van Buren counties). The unit was later reconstituted under the command of Colonel Allen R. Witt as a guerrilla cavalry unit charged with breaking the Federal occupation of Arkansas. The unit roamed throughout Arkansas, Missouri, and Kansas with little success. The area around present-day Conway saw some guerrilla activity on both sides during the war, but, as it was sparsely populated and held few sites of strategic interest, no major battles were fought there.

In 1853, Congress allocated funding for the Little Rock and Fort Smith Railroad Company, but the railroad was not constructed until after the Civil War. In 1869, Colonel Asa Peter Robinson, an engineer for this railroad and the “Father of Conway,” moved from New York to Little Rock to build the first twenty miles of the St. Louis, Iron Mountain, and Southern Railroad and was granted 640 acres of land upon his retirement in place of a salary. In 1871, he platted Conway Station. The town grew along the westward bend that was created when the track’s course was changed slightly to utilize the shallower grade of the Cadron Gap to the west.

Post Reconstruction through the Gilded Age
Conway became a center for farmers in the surrounding area to sell or gin their crops and buy supplies. The city, incorporated in October 1875 as simply “Conway,” was named for a famous Arkansas family that included the state’s first elected governor, James Sevier Conway. Controversies surrounded the creation of Faulkner County in 1873 and the choice of Conway as its seat continued for many years (partially as an offshoot of the Brooks-Baxter War). Eventually, the town and Faulkner County became home to large German and Irish populations. A fire in 1878 destroyed a large part of the town. Involved in rebuilding Conway was George Washington Donaghey, later the twenty-second governor of Arkansas.

The first newspaper to appear in Conway was the Arkansaw Traveler, published in December 1875. Two later newspapers, the Conway Democrat, founded by Colonel George Washington Bruce in 1878, and the Log Cabin by Able F. Livingston in 1879, merged in 1901 and became the current Log Cabin Democrat. The town’s first school opened its doors in February 1879 in a small church building.

In 1888, a young Methodist minister, Edward Tabor, who had arrived in Conway the previous year, gathered enough signatures on a petition to close the town’s saloons. He was assisted in this venture by city officials, most importantly Captain William W. Martin, who later served as mayor from 1890 to 1902, during which time Conway was provided with a telephone exchange and electric lights.

Tabor, Martin, and others then began a push to have Central Collegiate Institute (now Hendrix College) moved to Conway from Altus (Franklin County), about ninety miles to the west, in order to bring a Methodist-affiliated learning institution to central Arkansas. Despite bids from other towns such as Searcy (White County) and Arkadelphia (Clark County), Conway was chosen in 1889 due to factors such as personal issues between the faculty and board of trustees at Altus, as well as Conway’s larger size, greater funds, more centralized location, and recent conversion to dry status.

Early Twentieth Century
Frank Brown was lynched in 1905 for allegedly assaulting a white woman and her two sons. In 1909, Conway built a two-story brick building for its white school. The following year, the district bought land for the Pine Street School for Negroes. This school had a football team, rare among black schools in the state.

Arkansas State Normal School opened in 1908 as the first college for teachers in the state. It became Arkansas State Teachers College (ASTC) in 1925, State College of Arkansas in 1967, and the University of Central Arkansas in 1975. What is now Conway Regional Health System began as the Faulkner County Hospital, which opend in 1925.

A rise in the number of businesses in Conway led to substantial growth, but the Flood of 1927 put Conway under water for about a week, and the Great Depression resulted in the closure of the town’s three banks. However, the Works Progress Administration (WPA) was active in the town, building a new post office building and the Arkansas National Guard Armory. The Public Works Administration (PWA) built Wingo Hall on the campus of ASTC in 1934.

World War II through the Faubus Era
Navy V-7 cadets, Civil Aviation cadets, and the Women’s Army Corps (WACs) all trained on the campus of ASTC during World War II; indeed, the campus was so overrun with members of the military that Governor Homer Adkins considered renaming the school MacArthur Military College. In addition, Hendrix College hosted a unit of the Army Specialized Training Corps.

Following the war, Conway aimed to attract a wide array of businesses and industries. International Shoe Company set up shop in town in 1947, the same year that Allied Telephone Company (later Alltel) was established. Central College for Women closed in 1947, but the campus was soon purchased by the Baptist Missionary Association of Arkansas and became Central Baptist College.

In 1945, the Arkansas Game and Fish Commission began the process of creating Lake Conway, which was finished in 1951. The project resulted in a 6,700-acre lake that remains the largest lake in the nation constructed by a state game and fish commission.

In 1957, the four-year-old State Civil Defense Agency relocated to Conway; it was housed in an underground facility in 1965. Now called the Arkansas Department of Emergency Management, it was officially moved to North Little Rock (Pulaski County) on June 4, 2007.

Desegregation of Conway schools began in 1965 and was completed by 1968 without incident. In 1966, the state’s first public television station, KETS/Channel 2, was established in Conway.

Modern Era
Buoyed by its proximity to Little Rock and its status as an education center, Conway’s population grew significantly in the 1990s and beyond. Continuing to acquire land, the city has implemented a park-friendly growth strategy that is intended to further expand the park near Beaverfork Lake to the north, as well as to encourage intelligent city zoning and the efficient use of open space. The colleges also continue to expand: by 2011, UCA was the fifth-largest public university in Arkansas behind the University of Arkansas (UA) in Fayetteville (Washington County), Arkansas State University in Jonesboro (Craighead County), the University of Arkansas at Little Rock, and University of Arkansas-Pulaski Technical College. UCA had an enrollment of 11,487 in fall 2016.

Industry
Nabholz Construction Corporation, one of the top 200 construction companies in the nation, began operations in Conway in 1949. One of the largest information management companies in the world, Acxiom, started in Conway as Demographics, Inc., in 1969 under the ownership of Charles Ward of the Ward Bus Company; its headquarters are in Conway. In March 2010, computer company Hewlett-Packard opened a customer service and technical support facility in Conway, employing approximately 1,000 people. Kimberly-Clark Corp. had operated a plant in Conway since 1970 but announced its closure in December 2018 after the State of Wisconsin offered the Fortune 500 company a welfare package of $25 million. It was announced in 2021 that Westrock Coffee had bought the former Kimberly-Clark building to modify for use in development, production, and distribution of coffee, tea, and other products.

Attractions
Conway’s institutions of higher education provide numerous venues for performances and national speakers, as does the Reynolds Performing Arts Center at UCA. UCA also houses Arkansas PBS. Local festivals include Toad Suck Daze and the Fabulous 50s Bash. The city hosts the Conway Symphony Orchestra, as well as the Faulkner County Museum. Lake Conway, Beaverfork Lake, and Cadron Settlement Park also attract visitors. The Faulkner County Courthouse and the Conway Confederate Monument located on its grounds are among the many Conway properties listed on the National Register of Historic Places. 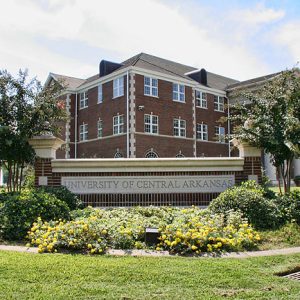