Perry County is in the Ouachita Mountains with the Arkansas River Valley flanking its eastern border and the Fourche La Fave River traversing it from west to east. It has six sub-basins and fourteen watersheds that include more than 800 acres of streams and lakes. The beauty of the mountains, rivers, and lakes is evident at every turn. The soil is rich alluvial in the river bottoms, and the uplands have loam with a clay foundation. The county has more than 287,000 acres of woodlands. Timber companies and the U.S. Forest Service are the major landowners.

Despite the county’s central location in the state of Arkansas, the mountains and watercourses made early settlement difficult. Flood control and better roads have made the county more accessible, but it remains one of the state’s least populated in the twenty-first century.

Louisiana Purchase through Early Statehood
Aaron Price, the first recorded white settler in the area, is purported to have settled on the Fourche La Fave River eight to nine miles downstream from present-day Perryville in 1808. The land that is now Perry County had been part of Pulaski, Conway, Hot Spring, and Yell counties. Created on December 18, 1840, by the legislature, it was named for Commodore Oliver Hazard Perry, a hero of the Erie Canal battle during the War of 1812. The act specified that a temporary seat of justice was to be at the house of John L. Houston in Perryville. Access to Perryville from Little Rock (Pulaski County) improved when Houston ran the first ferry across the Fourche La Fave River in 1847.

The first courthouse, a log cabin built in 1841, burned in 1850 during a feud between the Lively and McCool families, and all records were lost. Another log building was used until a better courthouse could be built, but materials for a new building were gathered and then left to rot when the men of the county left to fight in the Civil War.

Civil War through Reconstruction
During the Civil War, Perry County men joined Company B, First Arkansas Mounted Volunteers, which later transferred into Confederate service on July 20, 1861, as Company B, Third Arkansas Confederate Cavalry. A smaller number joined the Union forces of the Third Arkansas Cavalry Regiment, Union, Company C. There were no battles in Perry County, but two small skirmishes were fought at Cypress Creek (in May and December 1864), with another engagement taking place elsewhere in the county.

The German writer Friedrich Gerstäcker had visited the area in 1841 and wrote of the abundance of timber and game. Returning during the turbulent times of Reconstruction in 1867, he was dismayed to see the destruction caused by the war, noting that even the landscape had changed. Even though there were no significant battlegrounds in Perry County, he noted the countryside had been ravished “by the Jayhawkers, Union soldiers, and outlaws,” who had killed many farmers, plundered their farms, and stolen their livestock.

In 1871, J. L.W. Matthews donated land for a new courthouse. That courthouse burned in 1874, and all records stored there were destroyed. Another courthouse was built, and it was burned in December 1881 by arsonists during what has been labeled the Perry County War. Earlier that year, the editor/founder of the Perryville News was assassinated and his office across the street from the courthouse set on fire. More violence was threatened, and Governor Thomas James Churchill responded by sending the Arkansas civil militia, the Quapaw Guards, to Perry County. During their three-week stay, the guards did little more than lounge in the halls of the courthouse and congregate on the courthouse lawn. Finally, in 1888, a courthouse was constructed of locally fired brick, and, with several additions and modifications, it is still in use.

Perry County petitioned Congress in 1875 for an appropriation to improve navigation on the Fourche La Fave River. The act was approved on March 3, 1879, and work was begun to remove snags, logs, and heavy timber. In 1887, a congressional appropriation of $4,191 was spent to blast a channel fifty feet wide and two feet deep to eliminate rock shoals four miles below south of Perryville. This created the “steamboat turnaround” that can still be recognized.

The Gilded Age through Early Twentieth Century
In 1879, German Catholic families settled in east Perry County, naming their community New Dixie. Several Lithuanian families immigrated to the United States from 1904 to 1910 because of the Russo-Japanese War and settled near Bigelow between 1912 and 1914. A group of Italian immigrants arrived in 1915 in the east end of the county, bringing their wine-making skills to a region of Perry County that resembled Italy (and so was called Little Italy). Around 1912, African American families settled in the Toad Suck community, also known as Redemption, where, by 1926, a two-room Rosenwald School was built via the Rosenwald rural school building program, designed to improve the quality of public education for African Americans. This building was placed on the National Register of Historical Places in 2004.

A single lynching is recorded in the county. In 1892, a white man named Charles Stewart allegedly killed a deputy while attempting to escape from the county jail. A mob hanged him from a nearby tree.

Early in the twentieth century, a railroad track was built from Little Rock to Fort Smith (Sebastian County), running through a large section of Perry County. Rail towns such as Bigelow, Perry, Casa, and Adona reaped industrial benefits and astounding population growths. Timber lands were purchased by large lumber companies. Among the early lumber companies operating in Perry County was the Fourche River Lumber Company in Bigelow in 1902, which employed between 300 to 400 workers. In 1905, the Ft. Smith Lumber Company owned thousands of acres in Perry County and built mills near the railroads employing many men. By the early 1920s, the lumber companies had closed, and the boom was over.

The Civilian Conservation Corps (CCC) employed local citizens for their many county work projects. This encouraged people to stay in the area, even though the Depression worked against them. Migration to California to find work in the late 1930s and early 1940s was so extensive that the region around Fresno and Dinub in California became known as “Little Perry County.”

In 1933, a CCC camp was built at Thornburg and took on the project of building a camp for Girl Scouts between 1936 and 1941. Ouachita Girl Scout Camp was located by Narrows Creek, which the CCC dammed to form Lake Sylvia. The lake served the scout camp and a public facility. There were other CCC camps scattered around the county, each contributing to keeping the people and land intact.

Perry County’s water resources and the rich soils of the river valley make it a primarily agricultural county. Efforts are continuously taken to create and preserve these natural resources. Nimrod Dam on the Fourche La Fave was built in the late 1930s to help control seasonal flooding that isolated parts of the county from commerce several times a year.

World War II through the Modern Era
Crossing the Arkansas River on Highway 60 toward Conway (Faulkner County) was once a formidable endeavor. The residents of Perry County first used private ferry services, then those furnished by the Conway Chamber of Commerce in the 1920s, then the Arkansas Department of Transportation until 1944, when the service was discontinued for lack of traffic. Nearby residents urged Senator Guy “Mutt” Jones of Faulkner County and Representative Paul Van Dalsem of Perry County (“The Toad Suck Twins”) to persuade the state legislature to appropriate $20,000 to reopen the ferry service in 1953. The service operated until early 1970, when a bridge was built on Highway 60, eliminating the need for the old Toad Suck Ferry.

Agriculture and timber have been Perry County’s main industries since the early days when cotton was the cash crop. Since the 1970s, sod farms have prospered along the Fourche La Fave, and the cropping of pine trees bolsters the economy. Several cattle ranches dot the county, and the poultry industry has become significant.

In 1955, Harris Brake Lake, covering 1,300 acres, was built to create a wildlife management and recreation area that serves hunters, fishers, and tourists.

In 1971, Heifer Project International (now Heifer International) bought the 1,200-acre Fourche River Ranch from William E. Darby and the Premier Corporation to use as its training headquarters. The nonprofit organization is known worldwide and serves local interests in the areas of tourism and education.

The Arkansas Goat Festival is held in the county annually. Historic sites in the county include the Perryville American Legion Building and the Wallace Bridge.

Perry County was one of many Arkansas locations affected by the Flood of 2019. 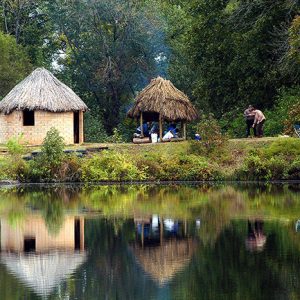