The Fourche La Fave River rises in the Ouachita Mountains near Boles (Scott County) and flows east-northeast for approximately 140 miles through Yell County and Perry County before emptying into the Arkansas River south of the town of Fourche (Perry County), which takes its name from the river. It is impounded in Perry County by Nimrod Dam. The origin of the river’s name is open to debate; “fourche” is French for “fork,” and “La Fave” may be in reference either to a family that once lived along the river or to early settler Peter La Fave. The “fork” of the river is the South Fourche La Fave River, which rises in the Ouachita Mountains near Onyx (Yell County) and empties into the Fourche La Fave River near Deberrie (Perry County).

The Fourche La Fave River was the site of human habitation since approximately 10,000 BC. In the historic period, French explorers and trappers operated in the area. The river valley attracted early American settlement; Aaron Price, who reportedly was the first settler in Perry County, made his home along the river in 1808. Many early settlers grew cotton in the river bottoms.

In 1841–42, German writer Friedrich Gerstäcker resided and hunted in Arkansas, mostly along the Fourche La Fave River. These experiences provided background for some of his 1844 book Streif- und Jagdzüge durch die Vereinigten Staaten Nord-Amerikas, as well as his 1845 novel Die Regulatoren in Arkansas, which describes vigilantism along the river. On another trip to the United States in 1867, he returned to Arkansas specifically to hunt along the Fourche La Fave River and visit his friend Gustavus Klingelhoffer.

Early transportation along the river was conducted by keelboat, but even this was challenging, given the numerous shoals along the course of the waterway. On March 3, 1879, Congress passed an act to improve the river. This included dynamiting some of the rocky shoals to create a deeper channel for transportation. By 1889, the river was navigable up to either Perryville (Perry County) or Aplin (Perry County), depending on the level of the water.

In the late nineteenth and early twentieth century, the Fourche La Fave River valley was the site of tremendous development based upon the coming of the railroads and the timber industry. In 1898, the Choctaw and Memphis Railroad Company (later the Rock Island) built a train bridge over the river at the foot of Kenney Mountain. The Fourche River Lumber Company located a mill along the river in 1907 at the town of Bigelow (Perry County). Other lumber companies came, though they had largely “cut and run” by the time of the Great Depression.

The Fourche La Fave River has historically been especially susceptible to flooding. One of the most noteworthy floods occurred in 1833, and flooding in the mid-1800s forced the residents of Perryville to relocate their town to higher ground. The Flood of 1927 also greatly impacted the river. In response, the Flood Control Act of 1938 authorized the construction of a dam along the river as an economical means of protecting communities and valuable crop land in Yell and Perry counties, as well as lessening spring flooding of the Arkansas River, into which the Fourche La Fave drains. Engineers began testing the proposed site for Nimrod Dam in October 1938. Extreme flooding along the Fourche La Fave in April 1939, which washed out two bridges and put a number of others under water, emphasized for dam proponents the need for flood control along the river. In March 1942, the dam project was complete. However, the project has not stopped all flooding along the river; one in 1982 proved quite damaging.

In the 1980s, sod farming became popular along the river bottoms. The river, which traverses portions of the Ouachita National Forest, is a popular waterway for canoeists, and Nimrod Lake offers numerous possibilities for recreation. Every spring, Perryville hosts the two-day festival Fourche River Days.

For additional information:
Gerstäcker, Friedrich. Wild Sports in the Far West: The Narrative of a German Wanderer beyond the Mississippi, 1837–1843. Durham, NC: Duke University Press, 1968. 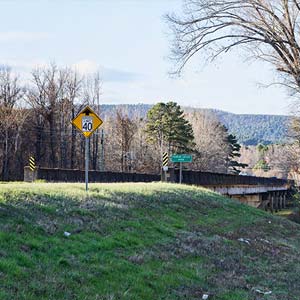