The Arkansas Research and Test Station site in Montgomery County was one of two stations constructed in the United States in the early 1960s capable of transmitting communications to satellites orbiting the Earth. Constructed in 1965–66 and in operation until 1969, it was added to the National Register of Historic Places on September 21, 2017. The exact location of the site is restricted.

The site was constructed by the Hughes Aircraft Company, founded by Howard Hughes. After initial efforts to place the site near Fayetteville (Washington County) to work with the University of Arkansas (UA) failed, the company struggled to find a suitable location. A location was finally chosen in rural Montgomery County that was located far enough from any population centers that could create microwave interference with the project. The entire site encompasses slightly more than eleven and a half acres.

Construction began almost immediately after the location was selected. The site consists of two structures: an eighty-five-foot-diameter paraboloid antenna and a control building. The antenna is located on top of a forty-five-foot pedestal.

The one-story control building is utilitarian in design. Resting on a cast-concrete foundation, the exterior and interior walls are constructed from concrete blocks. The roof is supported by flat warren trusses and covered with foam roof decking topped with two layers of silicone. Due to the flat roof, the building has many leaks.

The building faces south, and this side of the structure has three bays. The front door is located in the recessed right bay and surrounded by plate-glass windows with a plate-glass door. The center bay is not recessed and the left bay is recessed, although only half as much as the right bay. The left bay includes several spandrel and single-pane glass panels. The center bay does not include any ornamentation. A single Warren truss is visible on the front of the building, with all of the other trusses located inside of the structure.

The site remains much the same as it appeared during the operational period of the facility. The only changes that have been made to the site are the removal of the wiring on the antenna and the removal of the computer equipment from the building.

The importance of this building to the development of satellite communications cannot be understated. Only one other similar structure was built in this period, in Andover, Maine. 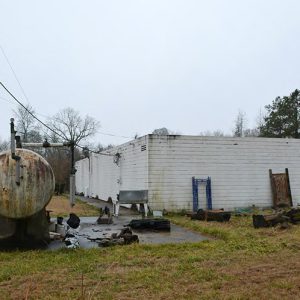 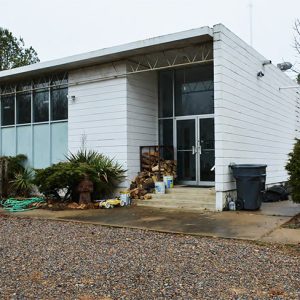