Morrilton, the seat of Conway County, is located on Interstate 40 fifty-four miles northwest of Little Rock (Pulaski County). It is home to the Winthrop Rockefeller Institute and the University of Arkansas Community College at Morrilton.

Louisiana Purchase through Early Statehood
In 1820, Major William Lewis and his son, Stephen D. Lewis, settled about a mile south of present-day Morrilton. In 1825, they established a trading post and called it Lewisburg. The new town thrived due to its location on the Arkansas River, and it soon had a large population and numerous businesses, including two newspapers and an opera house. A Masonic lodge served as the town’s first school.

From November to December 1836, during the Trail of Tears forced migration, Native Americans under the supervision of Pope County militia traveled through Point Remove Bottoms west of present-day Morrilton on their way to Indian Territory (present-day Oklahoma). White farmers and merchants profited from selling food and goods, particularly corn, either directly to the travelers or to the U.S. government, which was entrusted with supplying provisions to the migrants.

Civil War through the Gilded Age
Lewisburg and the rest of Conway County were sharply divided during the Civil War. The Confederacy was able to raise five companies in the area, while the Union raised three. Although no major battles were fought, guerrilla war was common in the area.

The Little Rock and Fort Smith Railroad surveyed a railroad route a mile north of Lewisburg from 1854 to 1860. The area along the railroad was named Morrilton after farmer E. J. Morrill, who sold the land at the site of the town’s future railroad depot to the railroad company. The track reached Morrilton in 1871, and the train depot was built in 1910. Residents gradually moved from Lewisburg to Morrilton until about 1880, when Lewisburg was abandoned. Morrilton became the seat of Conway County in 1883.

The Male and Female Academy opened in Lewisburg in 1867. The first public school for white students in Morrilton opened in 1881, while the first school for African-American students opened in 1895.

Beginning in the 1870s, German-speaking immigrants were encouraged by the U.S. government and the railroad companies to settle in the Arkansas River Valley and assist with railroad construction. Mostly Roman Catholic and Lutheran, they settled in towns such as Morrilton, Conway (Faulkner County), Subiaco (Logan County), Fort Smith (Sebastian County), and Little Rock (Pulaski County).

From the 1870s to the 1890s, Conway County was rocked by violence and election fraud. White Democratic elites battled white and newly enfranchised black Republicans for political control at the local, state, and federal levels. Reflecting the divided politics of the county, Morrilton hosted two newspapers, the Democratic-affiliated Morrilton Headlight and the Republican Star. Poor black and white farmers joined forces in the form of the Agricultural Wheel, which defended them against the high rents and interest rates levied upon them by the wealthy landowner Democrats.

In response, the Ku Klux Klan often terrorized the black population. A black state representative and Methodist minister, G. E. Trower, was reportedly murdered by white Democrats on board the Little Rock and Fort Smith train around July 1887. (In fact, he was driven out of the county and relocated to Independence County.) Judge Mason W. Benjamin was wounded while investigating allegations of election fraud in Morrilton on November 5, 1888. As a result, he later relocated to Batesville (Independence County).

The violence climaxed during the federal congressional election of 1888. Republican candidate John M. Clayton lost by 846 votes to Democratic incumbent Clifton R. Breckinridge. Suspecting election fraud, Clayton set out to investigate the matter. On January 29, 1889, he was assassinated in Plumerville (Conway County), six miles east of Morrilton. His murderers were never found, but many suspected that the Conway County Democrats, which included many white Morrilton elites, were responsible. White Democrats continued to dominate Conway County politics for nearly a century afterward.

Just a few years later, in 1893, an African American named Flanigan Thornton was lynched in Morrilton.

The Morrilton Male and Female School, distinct for its neo-Gothic architecture, was built in 1890. It began as a college and then served as a high school from 1920 to 1966. It was then a junior high until 1976 and was entered on the National Register of Historic Places in August 1999.

In 1898, twenty-five Morrilton women formed the Pathfinder Club, a social and literary club that promoted the self-education of women. Later that year, the club established Morrilton’s first public library.

Early Twentieth Century
In 1922, an African-American man named Less Smith was lynched for the alleged murder of a deputy sheriff.

Arkansas Christian College began in Morrilton in 1922. In 1934, it moved to Searcy (White County) and is today known as Harding University.

In 1923, Petit Jean State Park, Arkansas’s oldest state park, was established nineteen miles west of Morrilton. Company 1781 of the Civilian Conservation Corps (CCC) built and maintained facilities at the park from 1933 to 1938. Company 3789 carried out the terracing and sodding of pastures until 1937.

In 1929, the Conway County Courthouse was built.

World War II through the Faubus Era
In 1940, the Petit Jean Electric Cooperative was established in Morrilton. It was the first public utility to supply power to the area. It was later moved to Clinton (Van Buren County).

During World War II, Lieutenant Nathan Gordon of Morrilton earned the Medal of Honor for rescuing downed pilots over Kavieng Harbor on February 15, 1944.

In 1953, future Arkansas governor Winthrop Rockefeller came to Arkansas from New York, purchasing some land on Petit Jean Mountain and turning it into a farm and ranch that he called Winrock. Winrock was intended to showcase modern, progressive agricultural practices to small farmers and ranchers. Rockefeller also supported the establishment of a modern, model school system in Morrilton. In 1964, Rockefeller founded the Museum of Automobiles on Petit Jean Mountain, which showcases antique automobiles to the public.

On May 26, 1965, the Morrilton School Board abolished segregation in its schools. The black Sullivan High School was closed, and its students integrated into the white junior high and high schools.

Modern Era
After Rockefeller’s death in 1973, Winrock International was established on 188 acres at the site and operated there until 2004, when it was moved to Little Rock and Washington DC. Its purpose is to support global economic growth and environmental conservation.

The Winthrop Rockefeller Charitable Trust and the University of Arkansas System joined forces and established the Winthrop Rockefeller Institute at Winrock International’s former site. The Winrock Rockefeller Institute is a business conference and educational center that seeks to improve life in Arkansas by increasing economic opportunity while protecting the environment. Winrock Farms continues to operate separately at the site. It provides services to ranchers, serves as a breeding ranch, and sells natural, pastured beef to the public.

Two major developments in the 1960s for Morrilton were the construction of Interstate 40 through Conway County, crossing the northern end of Morrilton, and the completion of Lock & Dam Number Nine, later renamed for Arthur V. Ormond, on the Arkansas River. Transportation on both land and water have been reshaped by these major projects. In 1963, classes began at Petit Jean Vocational-Technical School, now called the University of Arkansas Community College at Morrilton (UACCM).

Major employers in Morrilton include G & M Tool & Machine, Green Bay Packaging, Lanco Industries, and Sound-Craft Systems. Petit Jean Meats has been a family-owned pork processor and retailer since the late 1920s. A fire on September 15, 2009, damaged ten buildings in downtown Morrilton, completely destroying four, including the E. E. Mitchell Company building, which housed an antiques business that was nearly one hundred years old. In 2013, Vinh Long, a Vietnam-based woven products and furniture manufacturer, announced that it planned to open a plant in Morrilton, becoming the first Vietnamese company to open a manufacturing plant in the United States.

Morrilton was one of many Arkansas locations affected by the Flood of 2019.

Notable Figures
Morrilton’s Moose Addition Neighborhood Historic District, which is on the National Register of Historic Places, was named for World War II war hero James Sayle Moose Jr. Orean Lencola Sullivan was the first black woman to win four different statewide beauty pageants, including Miss Arkansas, and she placed fourth in the Miss America pageant. Mary Elizabeth Massey was a history professor who researched and wrote about women in the Civil War. Artist Sheila Holland Cotton is known for her agricultural and rural landscape painting.

Attractions
The St. Anthony’s Hospital building, a landmark in Morrilton, was converted into apartments, which maintained the original integrity of the historic architecture. Morrilton’s post office is also one of nineteen places in the state where Depression-era post office art can be viewed. 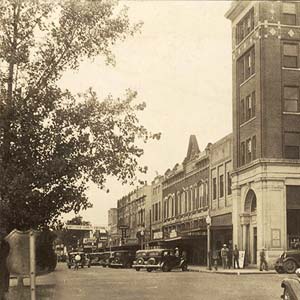