Arkansas has nineteen Depression-era works of art created for U.S. post office buildings. Two are sculpture bas-reliefs, and seventeen are paintings. In addition, another painting was destroyed in a post office fire, and one was never installed and was lost during World War II. The art was part of President Franklin Roosevelt’s New Deal and was created to reflect life in the United States at the time and to honor hard work. During a time of national economic crisis and with the specter of World War II on the horizon, images of strong workers, productive farmers, and determined pioneers were intended by Roosevelt to reassure and motivate Americans. The goal was to remind Americans of their history at a time when the future looked uncertain and to glorify Americans’ work ethic. Consequently, the Arkansas post office art emphasizes workers.

Professional national and regional artists throughout the United States were selected for the Arkansas art through a competitive process. Only two of the artists were Arkansas residents: Natalie Henry, a native of Malvern (Hot Spring County), and H. Louis Freund, the artist in residence at Hendrix College in Conway (Faulkner County).

The artists were directed to consult local citizens and the postmaster to select topics. The program, administered by the U.S. Treasury Section of Fine Arts, was the first federal program to require public participation in the section of public art. As the first comprehensive public art program in America, it used the post office as a democratic art gallery. The Treasury Department tied the budget for the art to one percent of the construction budget of the post office, a method known today as “percent for art,” which set the precedent for current public art funding.

In Arkansas, the art is displayed in smaller communities that were part of rural America in the 1930s. Consequently, the post office art was the first public art that many Arkansas residents had seen. The post office was selected for the site of public art because, at the time, it was the center of activity in every community.

The Section of Fine Arts exercised tight control over all aspects of the art, from the subject matter to the choice of colors and composition of objects in the art. Using what is sometimes called the realism style, the art was easily understood. The art in each of the Arkansas post offices has unique stories. Natalie Henry used her father and other relatives as models for workers in the Springdale (Washington County) farming mural, and one of the homes featured in the DeWitt (Arkansas County) mural still stands down the street from the post office. The bauxite mining theme in Benton (Saline County) reflects Arkansas’s contribution to the war effort as America’s only source of aluminum-producing ore. The nostalgic theme of nineteenth-century rural mail delivery evokes the excitement of the arrival of mail by stagecoach in Clarksville (Johnson County). A cotton industry mural in Dardanelle (Yell County) champions the heroic African-American field worker, while the painting of resting farmers in Morrilton (Conway County) reflects a “pride in work” message appropriate to New Deal ideology. Several artists’ work was interrupted by their call to military duty, and colleagues completed the art.

The U.S. Postal Service no longer uses many of the buildings, but all of the art is in public ownership and can be found at the following locations: 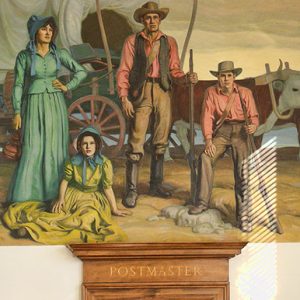