The Van Buren Post Office at 22 South 7th Street in Van Buren (Crawford County) is a one-story, brick-masonry structure built in 1936–37 and designed in a restrained, minimalist interpretation of the Art Deco style of architecture. It contains a mural financed through the U.S. Treasury Department’s Section of Painting and Sculpture (later renamed the Section of Fine Arts), a Depression-era stimulus project that promoted public art. The post office was listed on the National Register of Historic Places on August 14, 1998.

On November 1, 1935, the Van Buren Press Argus announced that a plot of land on the corner of South 7th and Webster streets would be the site of a new city post office. Postal engineer R. J. Evans visited the town two weeks later to do survey work preliminary to the release of bids. Charles H. Barnes of Logansport, Indiana, received the $54,223 contract to build the new facility. The opening of the building presumably occurred in early 1937.

Included in the plans for the new Van Buren Post Office was a $590 allotment for a 12′ x 5′ mural to hang above the postmaster’s door. Section chief Edward B. Rowan invited artist E. Martin Hennings of Taos, New Mexico, to submit designs for the proposed mural, and on September 7, 1939, Hennings mailed Rowan a selection of three pencil sketches in which he said that he restricted himself to the early settlers of Arkansas as his subject matter. The section chose a concept titled The Chosen Site and prepared a contract on October 2, 1939.

Hennings and the Section experienced a number of difficulties in creating the mural. The artist submitted his first color sketch on November 22, 1939, portraying a pioneer family before a team of oxen pulling a Conestoga wagon. Rowan responded on December 2, 1939, that a Section committee found the concept “too sweet for mural decoration,” noting that an image of a kneeling mother and child were “particularly disturbing” and “the men are in need of more convincing virility.” A new sketch was submitted on March 4, 1940, and also was met with some concern, particularly concerning a figure of a young man “as he does not seem either to be standing up or sitting down” and a feeling among personnel that “the general color of your design does not seem as happy as that of some of your previous paintings.”

Hennings submitted a photograph of his drawing on canvas on June 15, 1940, and, noting that “the work has been going a bit slower than anticipated,” requested an extension on his contract, which was due to expire June 30. It was extended to September 30 to allow him time to complete and install the mural.

On September 13, Hennings wrote, “I have finally finished my painting ‘The Chosen Site’ for the Post Office of Van Buren, Arkansas.” Rowan gave permission for installation on September 23, and a month later the artist supervised its installation by Van Buren decorator J. B. Davidson. According to an undated Press Argus article mailed to Rowan by Van Buren Postmaster E. W. Deering, “Mr. Hennings was greeted with cordial praise for his work that depicts a pioneer family that has found its site for a new home.” The article also notes that the model for the mural’s adult male figure was Taos gas station attendant Tony Martinez, whose “Mexican features, of course, were Americanized on the canvas.”

The Van Buren Post Office continues to serve the people of Van Buren in the twenty-first century. 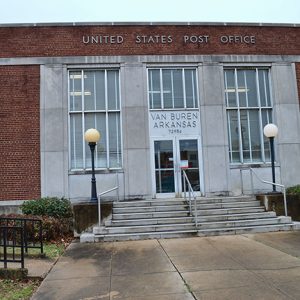