Camden is the county seat of Ouachita County and is located in south-central Arkansas on the Gulf Coastal Plain, about fifty miles north of Louisiana. Since it began life as Ecore a Fabre, a French trading post, its history has been closely tied to the Ouachita River. At the head of practical navigation, Camden was the “Queen City” of the Ouachita during the steamboat era. In 1864, it became the unintended focus of a major Civil War effort called the Red River Campaign, resulting in several significant battles. With the development of railroads, Camden was able to exploit its rich timberlands and remain an important transportation hub. Camden has also been important in both industry and education. Politically, Camden has had tremendous influence, producing three governors as well as three powerful senators.

Pre-European Exploration
The early inhabitants of the area around Camden were distinguished by the use of pottery, the development of agriculture, the introduction of the bow and arrow, and the building of large burial mounds. Until around AD 1541, the Camden portion of the Ouachita River was one of cultural overlap between the Plaquemine culture of southeast Arkansas and the developing Caddo culture of southwest Arkansas.

European Exploration and Settlement
Local tradition claims that Camden’s historic period began with the arrival of Hernando de Soto in 1541. The De Soto Commission of the 1930s had de Soto following the Ouachita on a southerly route that places him near Camden. The more recent study of Charles Hudson, however, projected a more northerly route away from Camden.

The explorers Father Jacques Marquette and Louis Joliet in 1673 and René-Robert Cavelier, Sieur de La Salle, in 1682 established French claims to the land they called Louisiana, which included what would become Camden, and found the Quapaw living at the confluence of the Arkansas and Mississippi rivers. The Quapaw claimed the territory that included this part of the Ouachita basin, but it was also influenced by both Caddo trade and culture. The old Indian trail called the Caddo Trace, leading from the Quapaw villages on the Arkansas River to those of the Caddo on the Red River, crossed the Ouachita River at what is now Camden. French hunters, trappers, and traders, who were drawn to the area by the abundant game, later established a rendezvous point on the high bluff above the crossing. The place became known as Ecore a Fabri or Fabri’s Bluff (later spelled Fabre).

In late 1762, France ceded Louisiana to Spain. In 1782, the Spanish governor sent a Frenchman named Jean Baptiste Filhiol, known to him as Don Juan Filhiol, to establish a civil and military post in the Ouachita district. Filhiol first chose to locate his headquarters at Ecore a Fabri with the expectation of creating a settlement there. After about two years, he decided to move downriver to the more central site of Prairie des Canots, present-day Monroe, Louisiana. These locations were noted in 1804 by the Hunter-Dunbar Expedition that explored the Ouachita River.

Early Statehood
In the two treaties of 1818 and 1824, the Quapaw were dispossessed of their extensive territories and sent to live on the Red River in Louisiana with the Caddo. After the departure of the Quapaw, a Choctaw camp was established a few miles south of Camden, where they hunted and planted corn until the early 1830s, when they followed migrations on the “old Quapaw trail” brought on by Indian Removal to the west.

By 1819, Jesse Bowman, of future Alamo fame, was living at Ecore Fabre, while the Tate brothers—Andrew, Richard, and George—came up the Ouachita on keelboats. Unable to go farther, they settled up river at a place now called Tate’s Bluff. In 1824, John Nunn moved to Ecore Fabre and became one of the early permanent settlers. The Nunn brothers planned to pole freight and passengers upriver toward Washington (Hempstead County). Steamboats arrived at Ecore Fabre in the 1820s and provided it with a direct link to the cotton and commercial markets in New Orleans. Because it was located at the head of practical navigation, Ecore Fabre became a commercial center and began to grow. Residents of Hempstead County began petitioning for a new road in 1821, and by 1828, the Camden to Washington Road was having additional work and maintenance done. By 1829, a large portion of Hempstead County, including Ecore Fabre, was broken off by the legislature to form an expanded Union County. In 1842, Ouachita County, named for the river, was formed from the northwest portion of Union County. Ecore Fabre was chosen as the county seat, and its name was changed to Camden at the suggestion of one of the commissioners, General Thomas Woodward.

During the 1850s, Camden served as the supply center for several counties and was the mercantile center for a radius of 100 miles. During this time, as many as 40,000 bales of cotton were shipped from its wharfs in a single year. As a steamboat river port, Camden had the accommodations and transportation to service the planter provisioning trade to New Orleans. By 1860, with a population of over 2,000, Camden had newspapers, churches, schools, merchants, lawyers, and manufacturers.

Civil War through the Gilded Age
During the Civil War, Camden was the focus of Union general Frederick Steele’s Red River Campaign of 1864. Steele moved south of Little Rock (Pulaski County) toward Shreveport, Louisiana, but got only as far as Camden, which he occupied while the Confederates pulled back to defend Washington. Forts Lookout and Southerland were built early in 1864, and the Camden Water Battery was built later in the same year, all to protect Camden from attack. After losing the Engagement at Poison Spring and the Action at Marks’ Mill, Steele had little choice but to retreat toward Little Rock. Camden and south Arkansas remained in Confederate hands until the end of the war.

After the Civil War, cotton production remained important to Camden. Much of it was accomplished by sharecropping. Steamboats continued to navigate the river, but railroads were coming. In the 1880s, the Iron Mountain and the Cotton Belt Route were opened, and in the early 1900s, the Rock Island connection was completed. Trains opened up markets for Ouachita County’s pine and hardwood forests. Though they were challenged by the railroads, the steamboats continued to service Camden until the 1930s.

Early Twentieth Century
The 1920s brought significant change to Camden. Oil was discovered at Stephens (Ouachita County), which became the site of Arkansas’s first oil well, though oil was also produced in the Louann and Pace City areas. An International Paper Mill was constructed in the late 1920s. Camark Pottery, founded and owned by Jack Carnes, also opened for business at this time and operated until the 1960s, producing pottery that is still prized. This period also saw the establishment of the Camden Evening News, which later became the Camden News. On May 29, 1925, a man known only as George was lynched near Camden.

The Tyson Family Commercial Building was built in 1923 and is still in use in the twenty-first century. St. John’s Episcopal Church was built in 1926 and is listed on the National Register of Historic Places. The Ouachita County Courthouse was built in 1933, and the Camden Confederate Monument is located on its grounds. In 1939, Benjamin Tyndle Fooks developed a new grape drink named Grapette at his Camden bottling plant that became a top-selling brand. It was later joined by Orangette and Mr. Cola. Camden built a county hospital in 1952. All the factors combined to create an employment and business climate that helped Camden’s population increase from 3,238 in 1920 to 11,372 in 1950.

World War II through Modern Era
The Camden Army Air Field was one of three contract primary flying schools located in Arkansas during World War II; it operated from 1942 to 1944. Ouachita County secured a major economic boost with the construction of the Shumaker Naval Depot during the war on land adjoining Calhoun County. Although it closed in 1957, it was reopened as Highland Industrial Park in the 1960s for defense and conventional manufacturing. It became one of the largest industrial parks in a five-state area and still employs nearly 3,500 people.

Educational opportunities were advanced in 1968 when Southwest Technical Institute opened in the industrial park. This institution evolved into a two-year technical college and became affiliated with Southern Arkansas University as Southern Arkansas University Tech (SAU Tech) in 1975, offering both technical and general education programs. In 1986, Camden opened the new George S. Ivory Primary School. Fairview and Camden school districts consolidated in 1991, and the new Camden Fairview High School was finished in 1994. Through an initiative in 2002, a new football stadium was built along with a multi-purpose building, and classrooms were added to both middle and high schools.

The end of the Cold War led to reduced defense-related employment in Highland Park, and International Paper Mill closed in 2000. The people of Camden responded to these challenges through economic revitalization, which was aided by opening the Ouachita Valley Business Development and Technology Center in 2004. Also, the Adams Avenue Redevelopment Project was established, and the new River Front Park opened in 2005. A bright spot on the Camden economic horizon is the proposed placement of the Interstate 69 corridor nearby. This may help restore Camden’s historic role as a transportation hub.

Famous Residents
Camden has exerted considerable political influence. Susan Hampton Newton Pryor was the first woman to run for office in Arkansas. Three governors have come from the city: George Washington Hays, Susan Pryor’s son David Hampton Pryor, and Benjamin Travis Laney. (Laney has a Camden bridge named after him). Three senators have also come from Camden. John McClellan, after moving to Camden to practice law, won election to the Senate in 1942 and served until his death in 1977. Former governor David Pryor was elected to the Senate in 1979 and served until 1996. His son Mark Pryor later served as a senator. World War II hero Ira Hudson Nunn was born in Camden.

The 1957 disappearance of lawyer Maud Robinson Crawford made national news. Coin collector Matt Rothert Sr. was responsible for having the phrase “In God We Trust” added to U.S. paper currency. Actress and writer Beth Brickell was raised for part of her youth in Camden. Occasional resident Lela Rochon is an actress who has starred in several movies and shows. Tommy Tuberville, a football coach who was elected U.S. senator from Alabama, was born in Camden.

Attractions
The McCollum-Chidester House Museum was built in 1847 by local merchant Peter McCollum. It served as the headquarters of the Chidester Stage Line in 1858, served as a Civil War headquarters, and was featured in the television mini-series North and South. Oakland Cemetery, which is on the National Register of Historic Places, is the largest Confederate cemetery in the area. The Rumph House was constructed in 1874. In September, the BPW Barn Sale is held at the Old Tate Barn, constructed in the 1880s. Just to the west of Camden are Poison Spring State Park and White Oak Lake State Park. Also of interest is the 1913 Missouri Pacific Railroad depot, which was restored in 1995. Every spring, the Camden Daffodil Festival features tours of gardens, historic homes, and a log cabin village. The Washington Street Historic District is listed on the National Register of Historic Places and is a mostly residential area with homes dating between 1847 and 1960, preserving a number of architectural styles.

Schambach, Frank, and Leslie Newell. Crossroads of the Past: 12,000 years of Indian Life in Arkansas. Fayetteville: Arkansas Archeological Survey, 1990. 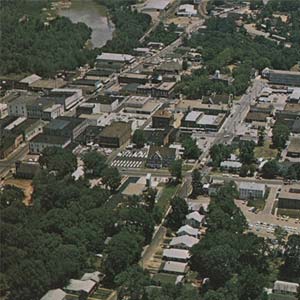 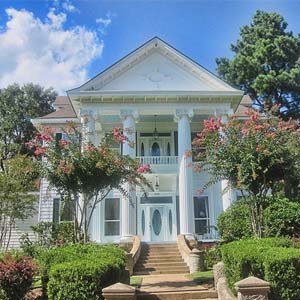 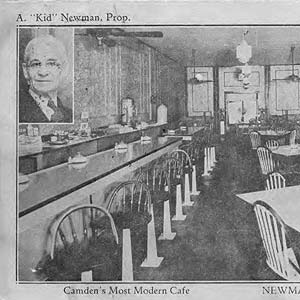 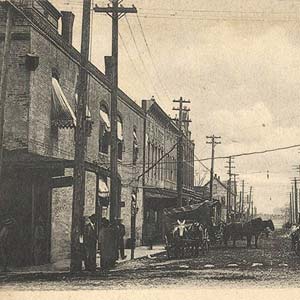