Oakland Cemetery in Camden (Ouachita County) was the first cemetery of that city and is on the National Register of Historic Places. It encompasses approximately twenty acres and has approximately 683 graves. The cemetery’s Forrest Hill entombs Confederates who died in battle near Camden at both the Engagement at Poison Springs on April 18, 1864, and the Action at Marks’ Mills on April 25, 1864.

The land for the cemetery was donated by Major William Bradley in the early 1830s. The first known grave bears a monument reading, “First grave in Cemetery. The body of an unknown little girl who died on a flat bottom boat on the Ouachita River was buried before 1840. Chain around the grave was from old anchor chain from the boat.” The first tombstone to be placed there was in memory of Thomas Stone, a slaveholder from Autauga County, Alabama, who had relocated to Camden in 1843 and died two years later. The obelisk that still surmounts his grave was shipped from New Orleans by steamboat.

The Confederate section of Oakland is less than one acre and contains over 250 marked graves of Confederate dead, both known and unknown. Each grave is marked with a white marble headstone, and the area is surrounded by a chain fence. The centerpiece of the Confederate section is a tall granite monument inscribed on the east face: “We care not whence they come / dear is their lifeless clay / whether known or unknown to fame / their cause and country still the same / they died and wore the Gray.”

This cemetery contains the graves of the Reverend Porter Clay, brother of the famous American orator Henry Clay. Many members of the family of John T. Chidester, who ran a successful stage coach line west and east from Camden, are buried in the Chidester plot. William Bradley, who donated the land to the city, died in Texas while on a business trip and was buried there. His widow could not bear that he was buried in Texas and sent a son and grandson to bring him home. She died and was buried in Oakland before they returned to lay him at her side.

In 2003, a member of the Ouachita Historical Society, which owns and maintains the cemetery, developed the idea of holding historical re-enactments at the grounds as a way of raising money for the cemetery’s restoration. Therefore, twice a year—each March during the Camden Daffodil Festival and on the third Friday and Saturday in October—the cemetery hosts a two-day cemetery walk event complete with re-enactors who portray the connecting stories of early inhabitants and settlers. Tours run continuously every fifteen minutes from the parking lot across from the cemetery. 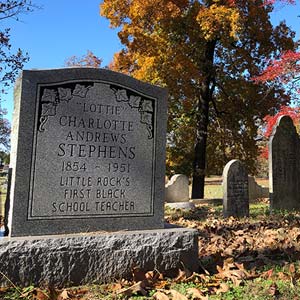