Located in the West Gulf Coastal Plain, Nevada County has a variety of sandy loam and silty clay loam soils, as well as extensive pine and hardwood forests. The Little Missouri River, the major stream in the area, separates Nevada County from Clark and Pike counties to the north.

The Reconstruction legislature formed Nevada County in 1871 from Hempstead, Ouachita, and Columbia counties. Prescott, the county seat with a population of 3,296 (as of the 2010 census), is the largest city. Other important towns are Emmet, Willisville, Rosston, Bodcaw, Falcon, Cale, and Bluff City.

The reason for the selection of the county’s name has been lost. “Sierra nevada,” as in the Sierra Nevada in California, means “snowy range” in Spanish. The county has no snowy mountains, but one theory holds that the shape of the county resembles that of the state of Nevada. Another, perhaps more plausible, theory is that the county was named for the silver-rich state of Nevada. The name may have been chosen in the hope that it would suggest riches comparable to those from Nevada’s famed Comstock mines. However, the county’s name is not pronounced like that of the state, featuring instead a long “a” sound for the middle syllable.

Louisiana Purchase through Early Statehood
Nevada County was inhabited in the prehistoric and contact period of early European exploration by the Prehistoric Caddo and then by the Caddo. Archaeological surveys have found artifacts representing occupation spanning from the Dalton Period through the time of Caddo habitation (8500 BC–AD 1500), but no sites are open to the public.

With the Louisiana Purchase in 1803, Euro-American settlers began to move into the region, often working their way up the larger streams. Stephen Vaughan and his wife, Polly, came up the Ouachita and the Little Missouri rivers possibly as early as 1812, settling at a place on the Little Missouri later known as Janes Ferry. Another early settler was named Bassett. Little is known about him, but two creeks in northeast Nevada County that flow into the Little Missouri were named for Vaughan and Bassett.

Vaughan was the first person in the county to be granted a federal land patent. He bought four tracts along the Little Missouri from the public domain. But he had been dead for two years by the time the patents were granted on December 5, 1823. His widow established her claim to his estate and for years ran a ferry and an inn for travelers heading north to Hot Springs (Garland County).

Land patents in the county were few in the 1820s. Statehood in 1836 and the opening of the Red River to steamboat navigation spurred land sales in the late 1830s. Small farmers, larger planters with slaves, and land speculators began to buy land out of the public domain. The flood of immigration in the 1850s accelerated the trend, which continued to the brink of the Civil War.

Many settlers were Southerners and brought their slaves to establish cotton as a major cash crop. Larger slaveholders were especially prevalent in a band across southern Nevada County. Thomas Mendenhall of Jackson Township (then in Ouachita County) was a North Carolina native who spent years in Alabama before moving to Arkansas. With ninety-nine slaves, he was the largest slaveholder in his township in 1860. Many African Americans in the region still bear the names of these early planters. In this mix were smaller farmers who owned few slaves, if any. Many of the planters and farmers moved to Prescott after the railroad arrived in 1873 to pursue careers as merchants, businessmen, professional men, and public officials.

The northern parts of the county tended more toward small farms, though some families had slaves. Wealthy slave-holding planters and businessmen headquartered in Springhill (Faulkner County) and Washington (Hempstead County) did have interests in northern Nevada County, then a part of Hempstead County. By the early 1860s, the area that would become Nevada County had only dirt roads and no towns of any size. Rural communities might have a store, a post office, and perhaps a church. Falcon, an antebellum village then in Columbia County, boasted a seminary (called Falcon Academy) for the daughters of the well-to-do.

Civil War through Reconstruction
In the Civil War, Nevada County saw no fighting until the spring of 1864 and the Union army’s Camden Expedition, the Arkansas prong of the ill-fated Red River Campaign to defeat Edmund Kirby Smith, commander of the Confederate Trans-Mississippi, who was headquartered at Shreveport, Louisiana. Nevada County has two national historic landmarks related to the war: the Elkin’s Ferry and the Prairie D’Ane battle sites. Elkin’s Ferry on the Little Missouri about ten miles from Prescott marks the point where the Union army crossed from Clark County into Hempstead County on April 3–4, 1864, and encountered stiff Confederate resistance. The Prairie D’Ane Battlefield (a.k.a. Prairie De Ann Battlefield) is near Prescott and was the site of skirmishing on April 9–12, 1864. The scattered antebellum village of Moscow just outside Prescott was the site of a rearguard action after the Skirmish at Prairie D’Ane.

The first county court convened on May 8, 1871, at Mount Moriah, a country church that served as a temporary county seat, since no incorporated cities or towns existed in the new county. Mount Moriah is still an active Methodist church between Prescott and Rosston near unincorporated Laneburg.

In 1872, a governor-appointed commission established Rosston as the county seat. On May 19, 1877, voters elected to move the government to the newly created railroad town of Prescott, where it has remained since July 2, 1877.

The building of the Cairo and Fulton Railroad in 1873 shifted the focus to the new railroad towns: Boughton, Prescott, and Emmet. By early 1874, the railroad was completed to Texarkana (Miller County) and, in May 1874, reorganized as the St. Louis, Iron Mountain and Southern Railway. The railroad attracted merchants from nearby counties such as Pike and Ouachita. Immigrants from other Southern and Midwestern states, as well as those from Canada and Europe, were in Nevada County in the 1880s.

Post-Reconstruction through the Gilded Age
In the post-Reconstruction era, Nevada County was a center for dissident third-party movements including Greenbackers, a Union-Labor coalition, the Knights of Labor, members of the Agricultural Wheel, populists, and socialists. Often, third-party candidates out-polled even the Democrats in Nevada County at election time. Such groups most likely prospered in Nevada County because of the changing agricultural economy and also because of the area’s growing access to other cities due to the growth of the railroads. These groups sought to effect change that would benefit farmers experiencing hardship. While their effect was felt more across the state than specifically in Nevada County, the area did produce several leaders for the state, including Thomas Chipman McRae, who served Arkansas as a U.S. congressman (1885–1903) and a progressive Democratic governor of Arkansas (1921–1925).

The railroads also brought the lumber industry. James H. Bemis and Benjamin Whitaker established the Ozan Lumber Co. at Prescott in 1891. Their interests and others’ soon reached throughout the county and into the Ouachita Mountains to cut the virgin forests. Timber and lumber production have remained important industries. Potlatch Corporation, Ozan’s corporate successor, was one of the county’s major employers until its Prescott operation closed in 2008. With the decline of farming since World War II, some parts of the county have become virtually depopulated as tracts of pines and hardwoods replaced cotton fields and family farms.

Early Twentieth Century through the Modern Era
Prescott, the county seat of Nevada County, was one of the first cities in Arkansas to establish public utilities. A bond issue passed in 1899 created both water and electric service for the residents of the city.

Because of the changing economy of the state, Nevada County’s economy also experienced dramatic change. The raising of cotton and corn and later some fruit and truck farming remained important into the mid-twentieth century. Especially during the Great Depression, the area was identified as a fruit-marketing center, with peaches, pears, plums, and watermelons being raised, as well as potatoes and peanuts. But farming later in the century was greatly diminished. Few row crops are now farmed in the county, though the raising of beef cattle and chickens remains significant. Manufacturing, transportation, and public utilities and services are the top sources of personal income. In 1983, Firestone Building Products opened a manufacturing center in Prescott that makes roofing materials.

Early in the twentieth century, Nevada County had fifty-four school districts, each of which served only white students or only black students. In 1908, future governor Thomas McRae don ated land for a school in Prescott for African-American students. Another school district was created in the county in 1936 by the consolidation of several smaller schools for African Americans; this district, the Oak Grove School District, at one time had 1,500 students. Both schools were closed in 1969 when, like other parts of Arkansas, Nevada County desegregated its school systems. Continued consolidation of schools has resulted in a total, as of 2008, of only three school districts in the county.

Points of interest include White Oak Lake State Park in Ouachita and Nevada counties. The Nevada County Depot and Museum is housed in a 1912 train depot in Prescott. De Ann Cemetery (Historic Section) in Prescott was established in 1880 and is now on the National Register of Historic Places. Many early settlers are buried there, as is Thomas McRae. The Fred C. Gragg Supertree Nursery near Bluff City is an International Paper facility that produces millions of seedlings annually. All of the Civil War sites in Nevada County are on private property. Every June, the city of Prescott hosts a two-day celebration called the Chicken and Egg Festival, including food booths, athletic contests, concerts, and children’s games. 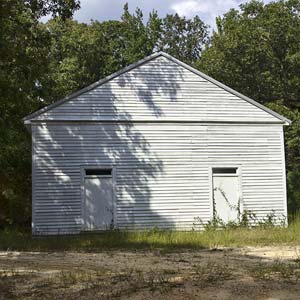