aka: Battle of Okolona

The Engagement at Elkin’s Ferry was an April 3–4, 1864, battle in which Confederate troops attacked a Union column deep in southwestern Arkansas. The battle began what became known as the Camden Expedition. (The battle site is commonly known as Elkin’s Ferry because that is how the name was printed in the official records of the Civil War, but the Elkins family owned the ferry at the time, so the name is more properly rendered Elkins’ Ferry.)

After capturing Little Rock (Pulaski County) and Fort Smith (Sebastian County) in September 1863, Union forces were in control of much of the state. From these two occupied cities, Federal troops could launch an attack into southern Arkansas, northern Louisiana, and eastern Texas. In March 1864, an attack on northwest Louisiana and eastern Texas was launched from both Arkansas and New Orleans, Louisiana.

Leaving Little Rock on March 23, Major General Frederick Steele set out to help the Union column from New Orleans capture Shreveport, Louisiana, then the headquarters for the Confederate Trans-Mississippi. Arriving in Arkadelphia (Clark County) on March 29, Steele remained for three days waiting for reinforcements from Fort Smith under the command of Brigadier General John Thayer. Thayer’s Frontier Division’s progress was hampered by bad roads and a lack of provisions. After three days, Steele was forced to continue his mission without the extra men. On April 1, Steele continued his expedition into south Arkansas, reaching the Little Missouri River on April 3. He was running low on rations and wanted to capture Camden (Ouachita County) to resupply his men. Camden was rumored to have a large supply of food. But Camden was occupied by the main body of the Confederate army in Arkansas, led by Major General Sterling Price. Steele decided to move toward Washington (Hempstead County)—then the Confederate capital of Arkansas—and draw Price’s army from Camden, leaving the town open for the taking. To move toward Washington, Steele needed to cross the Little Missouri.

Leaving one brigade of infantry on the north bank of the river near Okolona (Clark County) to act as a rearguard and look for Thayer, Steele moved most of his 8,500 men to the river. Price, meanwhile, had dispatched Brigadier General Joseph Shelby to harass the column from the rear and Brigadier General John Marmaduke to stop the enemy’s advance. Each commander had a brigade of cavalry under his command. Price was unable to send any infantry because both of his divisions were sent to Louisiana to counter the Union thrust from New Orleans.

Shelby decided to attack the Union rearguard while it was still isolated. At 9:00 a.m. on April 3, he attacked with his cavalry. Soon, a hailstorm moved into the area. Amid lightning and thunder, Union and Confederate forces continued their fight. The Confederates were not driven off by Federal troops or even the weather. After three hours, Union artillery fire upset several beehives near the Confederate positions, forcing a hasty retreat.

At the same time Shelby launched his attack, Marmaduke assaulted the head of the column on the south bank of the Little Missouri. He soon was driven back, only to resume his attack the next morning at 6:00 a.m. Marmaduke’s attack succeeded at first, pushing Federal troops back toward the river. As more Union troops crossed the river, it became harder and harder for the Confederates to continue their attack, and they fell back to their original positions by 11:00 a.m. The rest of the Union army crossed the river on April 4, and the next day, Steele resumed his march. He halted his army again only six miles from the Little Missouri when word reached him of Thayer’s approach. Marmaduke and Shelby, meanwhile, had withdrawn sixteen miles to Prairie D’Ane (Nevada County), where they went into camp and awaited the Union forces. On April 6, the Confederates were reinforced by two cavalry brigades from Indian Territory under the command of Colonel Richard Gano. The next day, the rest of the Confederate forces in Camden joined the troops already in the field. This brought the number of Confederate units facing Steele to seven cavalry brigades. On April 9, Thayer finally joined Steele. His men were also low on food, and Steele had to request that rations be sent immediately from Little Rock. On April 10, Steele’s column finally reached Prairie D’Ane, and his men constructed earthwork positions about a mile from the already-dug Confederate earthworks.

The Engagement at Elkin’s Ferry was the Confederates’ best chance of containing the Union advance into southwest Arkansas, but the lack of infantry units and the piecemeal use of the available cavalry units hindered their efforts. The lack of commitment exhibited by the Confederate forces let the Union advance continue and led to further bloodshed at Prairie D’Ane, Poison Spring, Marks’ Mills, and Jenkins’ Ferry.

The Nevada County Depot and Museum acquired much of the Elkin’s Ferry Battlefield in 2015 and is developing it as a heritage tourism destination. It looks much the same as it did in 1864. 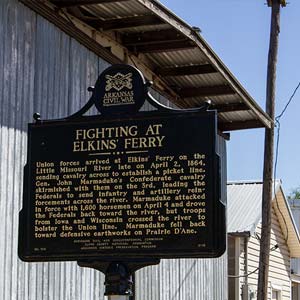