Historic Washington State Park, originally called Old Washington Historic State Park, is one of fifty-two state parks operated by the Arkansas Department of Parks and Tourism. This park primarily exists to preserve and interpret the history of the town of Washington (Hempstead County), emphasizing its political, cultural, and architectural history in the nineteenth century.

Washington was a major stopping point on the Southwest Trail that connected St. Louis, Missouri, to Fulton (Hempstead County) on the Red River. Many pioneers and settlers traveled this route on their way to Texas and the Southwest. Sam Houston, Davy Crockett, and Jim Bowie each traveled separately through Washington before they fought for Texas’s independence. While in Washington, Bowie commissioned local blacksmith James Black to make a bowie knife. Beginning in the early 1830s and continuing through the 1840s, bands of Cherokee and Choctaw Indians travelled through Washington on their way to Indian Territory (present-day Oklahoma) due to the policy of Indian Removal. In 1846, Washington was a mustering point for Arkansas troops marching south to fight in the Mexican War.

During the state’s early years, Washington was a thriving community and a major service center for area farmers and plantation owners. It was situated on the Southwest Trail, a major commercial route, and was also the county seat of Hempstead; thus it became the cultural, political, and economic center of the area.

In the fall of 1863, during the Civil War, the Confederate government of Arkansas fled from Little Rock (Pulaski County) to Washington. The 1836 Hempstead County Courthouse in Washington served as the state capitol from 1863 to 1865. Washington was threatened in the spring of 1864, when a Union army under the command of Major General Frederick Steele moved south along the Military Road traveling to Shreveport, Louisiana. A Confederate force under the command of Major General Sterling Price blocked the military. The two forces engaged in battle on April 10, 1864, about fourteen miles north of Washington. Steele was forced to move east to Camden (Ouachita County), and thus Washington was saved from invasion. This encounter was known as the Skirmish at Prairie D’Ane. Many wounded soldiers were brought to Washington for medical treatment. Several buildings, including the Washington Baptist Church, were turned into hospitals to treat the wounded. Seventy-four unknown Confederate soldiers from this battle were buried in a mass grave in the Washington Presbyterian Cemetery.

In the early 1870s, the Cairo and Fulton Railroad built a line through southwest Arkansas, bypassing Washington. The railroad established a depot nine miles away. This depot became Hope (Hempstead County) and was incorporated on April 8, 1875. On July 3, 1875, fire swept through the town of Washington and destroyed a large part of the business district. Another fire swept through Washington on January 21, 1883, destroying a number of businesses. The railroad had become the new economic artery, and rather than rebuilding in Washington, most businesses moved to Hope, thus precipitating the decline of Washington. In the late 1870s, Hope began to promote the idea that the county seat should be relocated from Washington to Hope. For sixty years, and several elections, Hope tried to gain the county seat. Unethical behavior abounded on both sides, consisting of lies, cheating, mud-slinging, and election fraud. Finally, the Arkansas Supreme Court intervened and, in a ruling in May 1939, declared that Hope was the county seat of Hempstead County.

The historic preservation movement centering upon Washington began in 1929. Members of the United Daughters of the Confederacy were able to secure money from the state legislature to fund the restoration of the 1836 Hempstead County Courthouse. In 1958, a group of Washington citizens formed the Pioneer Washington Restoration Foundation to preserve the town’s old structures and interpret the history of Washington. They operated tours of some of the historic homes for fifteen years and succeeded in getting the Washington Historic District listed on the National Register of Historic Places on June 20, 1972. In 1973, they invited the Arkansas Department of Parks and Tourism to help preserve and interpret the town. The foundation donated property, buildings, and antiques, and Old Washington Historic State Park became the thirty-fourth Arkansas state park when it opened on July 1, 1973.

The Arkansas State Parks, Recreation, and Travel Commission met on September 22, 2006, and voted to change the park’s name to Historic Washington State Park. The name change followed the approval of the park’s new master plan at the commission’s February 2006 meeting. These changes were approved to market the park better and to promote the community to future visitors.

Among the many notable structures are the 1836 Hempstead County Courthouse; the Works Progress Administration (WPA) gymnasium; Pioneer and Presbyterian cemeteries, where many notable early Arkansans are buried; Washington Post Office; the James Black School of Bladesmithing and Historic Trades, a project of the University of Arkansas Hope-Texarkana; and the Southwest Arkansas Regional Archives. The Royston Magnolia on the park grounds, planted circa 1839, is part of the Arkansas Famous and Historic Tree Program.  The American Bladesmith Society’s Bill Moran School of Bladesmithing, the world’s first college dedicated to teaching the art of making knives and swords by hand, operated at the park from 1988 until 2019, when it relocated to Texarkana, Texas.

The park offers guided tours of historic homes and structures, museums, and interactive and living history programs. The park hosts several special events annually, including the Five-Trails Rendezvous in February and the Jonquil Festival in March. In November, visitors converge on the park for Civil War Weekend, and in December, the entire park is decorated in traditional nineteenth-century decorations for the Christmas and Candlelight celebration. 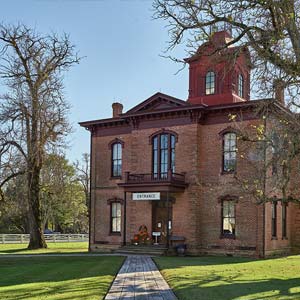 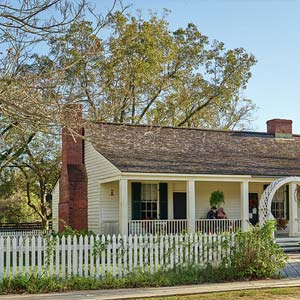 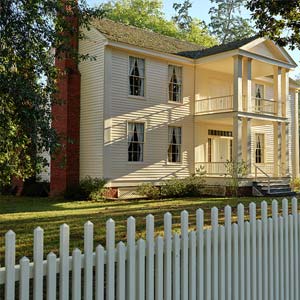