Fulton is a town on the northern bank of the Red River in southern Hempstead County. It is one of the earliest non–Native American settlements in Arkansas, and some claim that it is the oldest continually settled community in the state. Located at a convenient crossing of the Red River, Fulton has long been a transportation hub of southern Arkansas. Due to floods and river erosion, none of the early historic structures of Fulton have survived into the twenty-first century.

Caddo Indians inhabited the Red River valley of Arkansas long before any European explorers reached the area. A party of French explorers passed through the area in 1687 and noted several Caddo villages, one of which may have been located at the site of contemporary Fulton, although Caddo artifacts have not been discovered in the town. The network of footpaths used by Native Americans and early American settlers known as the Southwest Trail ran through the area, where a boat landing and a ferry across the river were established early in the nineteenth century. According to an Arkansas Gazette article published in 1938, records as early as 1806 refer to “the little town of Fulton on the Red River.” White settlements on both sides of the river relied on Fulton for food, merchandise, and other necessities of life in the frontier wilderness.

In 1808, Robert Stone received a land deed from Juan Dulac of the township of Little Prairie for the land where Fulton stands. Over the following years, portions of the land traded hands as developers focused their attention on the potential of the settlement. Amos Wheeler of St. Louis, Missouri, was an early investor in the town. On December 11, 1819, notices appeared in Arkansas and Missouri newspapers that James Bryan (an agent of Stephen Fuller Austin) was selling lots in Fulton at an auction scheduled for April 29, 1820. The Treaty of Doaks Stand, made between the federal government and the Choctaw in 1820, recognized Fulton as a landmark on the line that separated Choctaw land from land open to American settlers, although many American pioneers had already established themselves west of Fulton on land the treaty granted to the Choctaw.

The military highway that improved the Southwest Trail made Fulton the gateway to Mexico and later to the American Southwest. Most of the pioneers from the United States who settled in the northern part of Mexico called Texas crossed the Red River at Fulton on their way to their new homes. Meanwhile, in 1834, investors (including Roswell Beebe and Edward Cross) surveyed and platted a larger settlement for Fulton, with streets, homes, a hotel, and warehouses. George Featherstonhaugh visited the town on December 10, 1834, and wrote about it in his travel diary.

A post office was established at Fulton in 1838—called Red River at first, it was renamed Fulton in 1840. By that time, the first school and church in Fulton had also been established. During the Mexican War, American soldiers entered Mexico from several directions, but at the conclusion of the war, many of the returning soldiers came home by way of the crossing at Fulton. Meanwhile, steamboats regularly landed at the town, unloading passengers and supplies and receiving cargoes of cotton.

One of the first railroads planned for Arkansas was to have its southern terminal at Fulton. Roswell Beebe, Grandison Royston, and Edward Cross incorporated the Cairo and Fulton Railroad on April 1, 1852, planning to link southern Illinois with the Red River crossing by way of Missouri and Arkansas. Surveyors had already planned a route across Hempstead County before the incorporation of the railroad. A second railroad, planned to cross southern Arkansas from the Mississippi River to the Red River, was also planned. The Mississippi, Ouachita and Red River Railroad was surveyed from Gaines Landing on the Mississippi to Fulton. In December 1852, the federal government approved legislation, proposed by U.S. senator Solon Borland, to fund both railroads as well as a third line connecting Memphis, Tennessee, to Little Rock (Pulaski County). Some rails were laid during the 1850s, but the Civil War delayed the construction of these planned railroads for several years.

The railroad finally arrived at Fulton in 1874. The Cairo and Fulton Railroad had, by this time, become the St. Louis, Iron Mountain and Southern Railroad. A railroad bridge across the Red River opened for service across the river on March 20. Fulton had probably been incorporated when Arkansas became a state, but incorporation had been allowed to lapse during or after the Civil War. Fulton was reincorporated on October 7, 1879.

The railroad affected many parts of Arkansas, creating new cities like Hope (Hempstead County), while older cities such as Washington (Hempstead County) faded toward oblivion. Fulton neither prospered nor disappeared. For a while, it thrived as a lumber town, as well as remaining a center for shipping cotton. According to an article in the Hope Star of 1936, during its lumber days, Fulton had African Americans serving as postmaster, school board member, city council member, and constable, as well as having two black justices of the peace.

As Smith had foreseen, the older section of Fulton was removed by the Red River, and the current town of Fulton now encompasses his addition. In the twentieth century, railroads began to give way to automobile and truck traffic. A twenty-two-mile road was completed in 1922, linking Fulton with Emmet (Hempstead and Nevada counties). Once again, the Southwest Trail corridor funneled traffic through the Fulton area, as U.S. Highway 67 was completed in 1934 and Interstate 30 was built in the 1960s, each with its own bridge crossing the Red River. The interstate bridge was opened in 1966, but the full interstate highway was not finished until 1972. Hope and Texarkana (Miller County) both grew as a result of the highways, but Fulton did not.

Hempstead County schools were consolidated beginning in the 1930s; children from Fulton began attending school in Hope. In 1977, residents of Fulton sponsored a reunion of current and former Fulton residents. The initial reunion was so successful that it was repeated in 1979, 1981, and 1983.

The population of Fulton in 2010 was 201, with 117 white residents and 79 black residents. The town has five churches and a small Christian academy. It also has a truck stop, a café, a hunting club, a library, a country store, and several other businesses. The largest employer in Fulton is Shaw Constructors Inc. 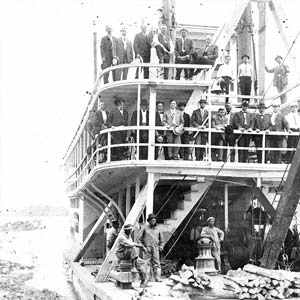