The bowie knife, made popular in the 1830s, has evolved into a specific form in current use. The bowie knife was worn for defensive purposes; its primary function was for personal combat. It was designed to be part of a gentleman’s attire, and the key difference between the bowie knife and a hunting knife, a dagger, or a dirk was, initially, the quality of finish of the bowie. Bowie knives came in a variety of forms—with or without guards, with differently shaped blades—and often were adorned with silver and other decoration, sometimes including etching and/or engraving on their metal surfaces.

The knife got its name from a pioneer family who settled in early Arkansas and Louisiana. Jim Bowie, the best known of the brothers, killed one man and seriously injured another with a “big knife” in the “Sandbar Duel” on September 19, 1827, upriver from Natchez, Mississippi. He later moved to Texas and died at the Alamo. In the early 1830s, the term “bowie knife” began to be used, possibly shorthand for “knife like Bowie’s” for the knives that were being worn in the Mississippi River Valley region especially. Jim Bowie’s brother Rezin promoted the knife’s association with the Bowie name by giving away several presentation knives and attributing the design of the “first” bowie knife, the one wielded by Jim at the Sandbar Duel, to Rezin himself. By his own account, this knife was a simple “hunting knife.”

Among the early cutlers who made a knife more refined than the common hunting knife was James Black of Washington (Hempstead County), who claimed to have made a knife for Jim Bowie. An article in the Washington (Arkansas) Telegraph on December 8, 1841, first attributed the invention of the bowie knife to Black. Arkansas statesmen Daniel Webster Jones and Augustus Garland both heard stories from Black about his designing and making a knife for Bowie. Black’s knives, embellished with silver plating on the ricasso (the part of the blade immediately above the handle) and silver around the distinctive, coffin-shaped handle, became the most copied of all bowie knives; many Sheffield, England, cutlers produced knives with the coffin handle and/or elements of the silver wrap around the handle. The connection of these knives to Arkansas, and the state’s reputation for the use of the blade, inspired an alternative term to “bowie knife.” “Arkansas knife” and then “Arkansas toothpick” were used synonymously for the bowie knife in the antebellum period. (Only a few references from that period make a distinction between Arkansas toothpick and bowie knife.) In the 1830s, several states passed laws establishing sanctions against the use of the bowie knife and the Arkansas toothpick. The state’s reputation suffered because of its association with violence and the “toothpick,” and some people called Arkansas the “toothpick state.”

By the time of the Civil War, the term bowie knife had come to be used for any large knife, and many soldiers went off to war with such knives. They were not particularly useful in battle. Today, “bowie knife” usually is defined as a large knife with a cross guard and a blade with a clipped point, while the “Arkansas toothpick” is a knife with a double-edged blade coming to a point. 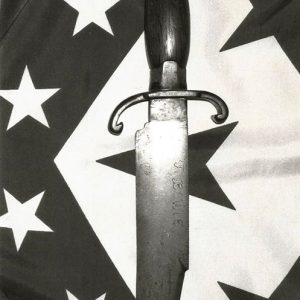 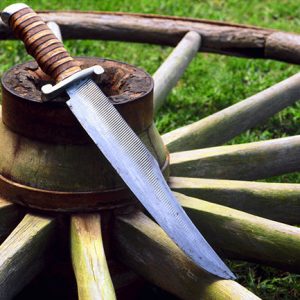