A cold, rainy January in 1937 set the stage for one of the worst floods—if not the worst—in Arkansas. Corrective action undertaken during the preceding ten years kept Mississippi River levees along Arkansas’s border from breaking, however, thereby preventing a repeat of the Flood of 1927. Nevertheless, eleven Arkansas waterways overflowed, inundating or otherwise affecting seventeen adjacent counties. Eleven additional states flooded, from West Virginia to Louisiana, affecting 1.5 million people in 196 counties and submerging 8,141,182 acres (12,721 square miles) along the Ohio and Mississippi river valleys. This natural calamity shattered all previous disaster records, excluding World War I, according to the American Red Cross (ARC).

Arkansas’s floodwaters came from tributary streams no longer able to drain effectively due to the cresting Mississippi River. Specifically, Bayou de View as well as the Black, Cache, L’Anguille, Little Red, Spring, Strawberry, St. Francis, Tyronza, and White rivers spilled across agriculture terrain mostly bare of crops that time of year. While the Arkansas River was at flood stage at Van Buren (Crawford County) for only one day, the White River exceeded flood stages below Calico Rock (Izard County), and the St. Francis River had considerable flooding from January into March. The largely rural, agricultural Delta saw the spread of the floodwaters into tenants’ and sharecroppers’ homes and communities already struggling from the effects of drought, the Great Depression, and the Dust Bowl.

The ARC in Arkansas mobilized local chapter relief efforts between January 10 and 15, with the national office assuming command on January 20 and reaching what it classified as a more critical level between January 24 and February 11. Counties needing various levels of rescue operations were Arkansas, Craighead, Crittenden, Cross, Greene, Jackson, Lawrence, Lee, Mississippi, Monroe, Phillips, Poinsett, Prairie, Pulaski, St. Francis, White, and Woodruff. Eight counties offered support operations to assist the displaced. Emergency relief consisted of rescue, temporary shelter, food, clothing, and urgent medical care extended without question to all persons affected. Once floodwater receded, assistance was disseminated based on need, not loss. Arkansans were, according to the ARC, experienced beneficiaries when it came to dealing with their disaster relief operations, given that “after long years of difficulty with natural forces, they understood fully what the Red Cross could and could not do.”

Arkansas’s floodwaters inundated 1,037,500 acres of agricultural land and 756,800 acres of other land, affecting 40,916 families and their livestock. To shelter the evacuees, the ARC established seventy-five camps (tent cities) and concentration centers (existing structures) equipped with special livestock corrals. Twenty-nine field hospitals staffed by 166 nurses tackled the needs of patients and performed immunizations against typhoid and diphtheria, among other diseases. A tent city near Jonesboro (Craighead County) was the only refugee location where disease broke out. Meningitis appeared there on February 5 in a child. An emergency isolation hospital was prepared to house the eventual thirty-six cases that resulted in eleven deaths.

The ARC noted that wave-wash damage, which occurred when wind and water merged into a damaging force, added to the destructiveness of the flood itself in Arkansas.

The U.S. Army, Arkansas National Guard, and volunteers prepared twice-daily meals for the displaced. As floodwaters receded and families returned home, baskets of food were distributed. Law and order were the responsibility of the local authorities supplemented by the National Guard. A principal warehouse at Forrest City (St. Francis County) was established to collect and move materials to the other sites. Recreation programs were instituted for adults and children at camps and centers. The Works Progress Administration’s Federal Theatre Project had a mobile unit that offered a variety show touring Arkansas.

Some Eastern Arkansans fled into Memphis, Tennessee, including some who were not in danger. From a relief standpoint, the ARC felt that “it would have been more practicable to have directed the ‘refugee flood’ toward Crowley’s Ridge, a natural protection a few miles to the west in Arkansas.” However, the Memphis ARC mobilized fourteen concentration camps in schools, the fairgrounds barracks, and other available facilities to deal with the influx.

R. S. Hayden, pastor of a Methodist church in Forrest City (St. Francis County), wrote on February 3 about the suffering and stress from the floodwaters. The minister said the city now housed “15,000 refugees with more coming, plus 20,000 mules, cows, dogs, cats, and chickens.” Fleeing citizens were segregated by race into tent cities—one near the high school and the other by the cotton compress.

In his March 25 letter, J. H. Kirkpatrick, secretary of the Phillips County Chamber of Commerce, thanked the citizens of Benton County “for their hearty response” to the disaster. He “announced the high water of the Mississippi have [sic] almost disappeared. Over 8,000 refugees have been returned to their homes and farms this past week. The southern part of the county has experienced a very disastrous devastation from high waters, wind and waves.”

Eleven-year-old Marvin Howell lived in Manila (Mississippi County) when the rains hit. He recalled schools being dismissed and “life came almost to a standstill.” His father, a rural mail carrier, continued working while he sent his family to stay with his brother in Memphis. Marvin’s recollections included the drive “for miles and miles over the submerged road,” eventually crossing the Harahan Bridge into Memphis.

Hardest hit areas in the Flood of 1937 were outside Arkansas; nevertheless, Arkansas suffered the highest human death toll and injury. With aggregate disaster building repair exceeding $5.75 million and the cost of replacing household goods at more than $6.75 million, Arkansas losses in these categories seemed almost trifling. However, rural Arkansas families living along backwater areas suffered extensively.

My father-in-law, Ralph Putman, saved many lives using his boat to take people to safety. He was awarded two hunting dogs from the governor of Arkansas. 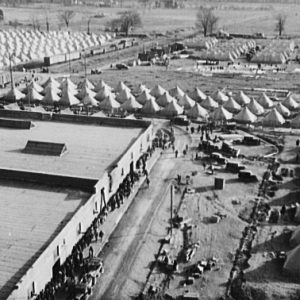