Woodruff County, a level, fertile plain watered and drained by the White and Cache rivers, was once home to many Native Americans who inhabited the area when the first white men arrived. Little is known about the early inhabitants, but the mounds they built for worship, burial, and living can be found in many areas of the county, particularly near Cotton Plant and McCrory, though farming operations have leveled most of the sites.

Louisiana Purchase through Early Statehood
Woodruff County, thick with trees and swampy areas, received little attention from Spanish or French explorers, though the French named the Cache River. When the United States made the Louisiana Purchase in 1803, the area was sparsely settled. The state’s population was a little over 1,000 at the time.

Civil War through Reconstruction
Woodruff County was established on November 26, 1862, but following the confusion of the Civil War, it had to be re-approved in 1865. Augusta, which had been the Jackson County seat in 1852–53, was named Woodruff County seat and remained so, even though court sessions sometimes were held in Cotton Plant and McCrory for convenience. The county was named for William Woodruff, editor of the Arkansas Gazette. Thomas Hough, an Augusta founder, played an important part in the founding and organization of Woodruff County. In 1870, Hough sold his residence in Augusta to the county for $28,000 to be used for a courthouse and public square.

During the Civil War, most of the citizens of Woodruff County opposed secession but lent their support to the Confederacy, and several battles were fought in the county. The most notable were the Action at Fitzhugh’s Woods and the Action at Hill’s Plantation, both Union victories. A small force of Union troops occupied Augusta for a short time in the winter of 1864–65. There was much unrest in the county after the war, and in December 1868, Republican governor Powell Clayton declared martial law in Woodruff County and sent a company of militia to search for members of the Ku Klux Klan (KKK), which was strong in the county during Reconstruction. Their commander, General Daniel Phillips Upham, arrested twelve of the leading citizens of Augusta and held them to prevent resistance. Several citizens who protested were killed, and the town was looted by the militia.

Post Reconstruction through the Gilded Age
In the years after the Civil War, Woodruff County prospered with wood and agriculture industries. Sawmills and woodworking factories thrived, making use of the many acres of timber in the county. In the late 1800s and early 1900s, railroads began to move into the county, and towns sprang up around them, increasing the county’s population each year and greatly improving the economy. Cotton, corn, oats, and hay thrived in the fertile, well-watered soil, and the two rivers in the county by which to ship products added to the area’s prosperity.

In 1901, a court district was created to serve southern Woodruff County, with money set aside for a courthouse and jail at Cotton Plant. The old courthouse in Augusta was torn down for a new courthouse and jail. Both courthouses were designed by Charles Thompson. For a while, the town of McCrory also had its own courthouse, but soon the functions of all three were consolidated in Augusta. The courthouse there is on the National Register of Historic Places.

Woodruff County has several factories, including Sloan Valve, Centoco, and Worldwide Labeling, and a few large farm service companies, but one of the main contributors to the economy is hunting, which has grown significantly in recent years. Much of this is because of the 6,394-acre Rex Hancock/Black Swamp Wildlife Management Area established along the Cache River in 1971 and owned by the Arkansas Game and Fish Commission. Several acres are being reforested, and two wetland complexes are being developed to provide habitat for waterfowl. The wildlife area is mostly low bottomland and swamp, and it offers some of the best duck hunting in the state. Many hunters come from surrounding states, some flying in to local air strips or the Woodruff County Airport, to take up temporary residence in the county during duck and deer season. Fishing is also gaining popularity, especially of catfish. Several hunting clubs, bed and breakfast inns, and specialty hunting enterprises have sprung up due to the growing interest in hunting.

The Highway 64 Speedway on U.S. 64 between Augusta and McCrory was a three-eighths-mile, banked dirt track and was locally owned and operated. It ran late model, pure stock, modifieds, street stock, and e-mod cars. The track was in operation only intermittently between 2001 and 2007. The state’s first harvest of medical marijuana occurred in 2019 in a facility in Cotton Plant.

Education
Woodruff County has two school districts. McCrory School District has approximately 669 students. Augusta Public School System annexed Cotton Plant School District in 2004, increasing its student body by about eighty. Augusta has 540 students in elementary and high school. Cotton Plant High School is closed, but Cotton Plant Elementary is open as of 2006, though the number of students has dropped and it may soon close.

Rivers and Roads and Points in Between. Augusta, AR: Woodruff County Historical Society (1972–). 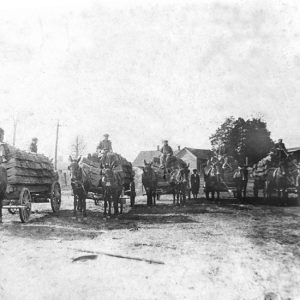