The origins of the blues are murky, but the state of Arkansas seems to have hosted the music and its creators since its beginnings in North America and helped spread it worldwide. Blues is acknowledged as the root from which sprang jazz, rhythm and blues (R&B), rock and roll, and hip-hop; in addition, it has informed the genres of country and western, gospel, and bluegrass. Blues and its offspring have long since crossed the globe, but its standard-bearers are largely confined to the Mississippi River Delta, especially eastern Arkansas and western Mississippi.

Emerging in part from call-and-response “field hollers” dating from the slavery era, blues had practitioners originally belonging to many different groups with their own musical styles. Most scholars believe that commercial blues was born around the start of the twentieth century and popularized by bandleader/songwriter W. C. Handy. Traveling medicine shows played the region, and blues stars were among the first to test 78 r.p.m. recording technology. The genre gained momentum in the 1920s with female vocalists such as Ma Rainey and Bessie Smith and with stage shows and brass bands. This style largely faded with the Great Depression. Handy’s own description of how he first heard what became known as blues was more the standard image—blues tunes played by a nondescript solo male street performer.

In the 1930s, William Bunch, known as Peetie Wheatstraw, of Cotton Plant (Woodruff County), Roosevelt Sykes of Elmar (Phillips County), and Robert “Washboard Sam” Brown of Walnut Ridge (Lawrence County) were among the era’s most popular and prolific blues performers. Washboard Sam, best known for the song “Mama Don’t Allow,” also recorded under the names Ham Gravy and Shufflin’ Sam—and sometimes performed with his half-brother “Big Bill” Broonzy, who was raised in Langdale (Jefferson County). Casey Bill Weldon, born in Pine Bluff (Jefferson County), had a mid-1930s hit, “Somebody Changed the Lock on My Door,” and recorded as a member of the Memphis Jug Band, the Hokum Kings, and the Washboard Rhythm Kings.

In 1941, a blues music radio program, King Biscuit Time, began broadcasting five days a week on KFFA 1360 AM out of Helena (Phillips County). For the first time in its birthplace, blues was heard regularly live over the airwaves, a medium that knew no color line, and recognition of both King Biscuit Time and the blues widened. “Sunshine” Sonny Payne worked at KFFA at the inception of King Biscuit Time in the 1940s and has hosted the Peabody Award–winning program into the twenty-first century, interrupted only by his World War II service. Host to Elmore James, Johnny Shines, Muddy Waters, Little Walter, Robert Johnson, and countless others, Helena-West Helena (as it is now called) was already a bustling music town with a lively nightlife. With the success of King Biscuit Time, still more bluesmen were attracted to the region. Others, like James Cotton, “Forrest City” Joe Pugh, Fred Below, and Willie “Big Eyes” Smith, did not have as far to travel to catch the zeitgeist. In addition to the ever-growing audience, the program helped launch a number of performers. King Biscuit Time made a star of the show’s originator, Aleck “Rice” Miller (a.k.a. Sonny Boy Williamson), a decade before he ever cut a record. He was even honored with his own brand of corn meal, bags of which displayed him atop a giant corncob. Robert Lockwood Jr., Houston Stackhouse, Joe Willie Wilkins, Robert “Dudlow” Taylor, and James “Peck” Curtis, who had played on Blytheville (Mississippi County) radio in the mid-1930s, all took their turns as King Biscuit Boys on King Biscuit Time, as did many others.

Some heard their first electric guitar on the show, an experience signaling a new era, courtesy of Lockwood, the de facto stepson of performer Robert Johnson (who spent likely the most settled period of his life in Helena). After two years on King Biscuit Time, Lockwood, born in Turkey Scratch (Phillips County), had his own show promoting Mother’s Best Flour. By 1943, Chester Arthur Burnett, known as Howlin’ Wolf, who was a farmer in the region, did a show promoting Hadacol elixir on KWEM in West Memphis (Crittenden County). These shows’ popularity helped spread blues beyond its core rural black constituency.

As black southerners migrated north to catch the industrial revolution, so did the music. Although the solo acoustic performer remained a staple, blues increasingly featured drums and plugged-in instruments. Howlin’ Wolf, who moved to Chicago, Illinois, and embodied the louder, more aggressive sound until his 1976 death, named this style for the town where he created it—the West Memphis style. It is more popularly known as Chicago blues.

Meanwhile in the 1940s, Louis Jordan of Brinkley trademarked the popular, more urbane jump blues. In the midst of the big band era, Jordan’s stripped-down blues- and jazz-based Tympany Five set the prototype in style and substance for R&B and rock combos to come. In addition to his incredible chart success, he influenced such musicians as Chuck Berry, B. B. King, James Brown, and Ray Charles.

Although he had long performed in combos, “Big Bill” Broonzy subsequently exploited the nostalgia for “authentic” blues performers, often portraying himself as just off the farm. With several tours in the 1950s, Broonzy helped spark European interest in blues. American blues performers proved to be the inspirational source of the early 1960s British Invasion of the American charts: the Rolling Stones recorded with and appeared with Howlin’ Wolf on TV, and both the Yardbirds and the Animals recorded with Sonny Boy Williamson II.

Albert King, who played a right-handed, flying-V guitar left-handed, is probably the most imitated blues guitarist today, with Eric Clapton and Stevie Ray Vaughan being just two of King’s acolytes. King, who settled in Crittenden County, is buried in Edmondson (Crittenden County). Like King, guitarists/vocalists “Son” Seals of Osceola, Larry “Totsy” Davis of Little Rock, Willie Cobbs of Smale (Monroe County), and Luther Allison of Widener (St. Francis County) forged successful blues careers during the sometimes lean 1960s and 1970s, as did lesser-knowns such as Elmon “Driftin’ Slim” Mickle of Keo (Lonoke County), as well as Claude “Blue Smitty” Smith and Floyd Jones, both guitarists/vocalists from Marianna who recorded for Chess.

Robert Palmer’s 1981 book Deep Blues helped raise scholarly awareness of blues. In the early 1990s, Palmer further helped spark renewed interest in what many saw as an antiquated musical form by producing vibrant albums by the Jelly Roll Kings, with Sam Carr of Marvell (Phillips County) and Frank Frost of Auvergne (Jackson County), along with R. L. Burnside, Junior Kimbrough, and Helena-born CeDell Davis for the Fat Possum label of Oxford, Mississippi, which Palmer helped found. Davis cut a 2002 album produced by Little Rock native Joe Cripps with rock-star power from R.E.M.’s Peter Buck and others. The 1986 inception of Helena’s King Biscuit Blues Festival also helped repopularize blues in its cradle. Worldwide appetite for American blues made international stars of Luther Allison, Eb Davis of Elaine (Phillips County)—both of whom moved to Europe—John Weston of Smale, Michael Burks of Camden (Ouachita County), and other Arkansans who may be better known around the world than in their hometowns.

Blues laid the foundation for the entirety of the modern American sound and has influenced generations. Arkansas produced much of the original class of rock and rollers—Sonny Burgess and the Pacers, Billy Lee Riley and His Little Green Men, Roland Janes, cousins Ronnie and Dale Hawkins, Charlie Rich, Johnny Cash, Conway Twitty, Roy Buchanan, and Levon Helm. All were heavily influenced by blues. Rhythm and blues acts are equally indebted to blues, and many Arkansans contributed to the sound: musician/songwriter/producer Henry Glover, born in Hot Springs (Garland County); Cullendale (Ouachita County) native Little Willie John; Junior Walker, who was born in Blytheville; Johnnie Taylor of Crawfordsville (Crittenden County); Osceola’s Harvey Scales; Al Green of St. Francis and Lee counties; Brinkley-born producer/songwriter Al Bell; and Ne-Yo of Camden, among others.

Though other popular musical strains have caught on over the decades, at their core is blues. “I think blues will never die,” said Helena-born slide guitar great Robert Lee “Nighthawk” McCollum. “You can always come up with something else, but when you wind up, you wind up with the blues every time. It’s just something you can’t get rid of.”

The Delta Cultural Center, part of the Department of Arkansas Heritage, opened in 1990 on Helena’s historical Cherry Street. Around the corner is a street named for harmonicist Frank Frost. Once the music of societal outsiders, blues is now celebrated around the world, and, at last, in its birthplace.

Helm, Levon, with Stephen Davis. This Wheel’s on Fire: Levon Helm and the Story of the Band. 2nd ed. Chicago: Chicago Review Press, 2000.

Riesman, Bob. I Feel So Good: The Life and Times of Big Bill Broonzy. Chicago: University of Chicago Press, 2011. 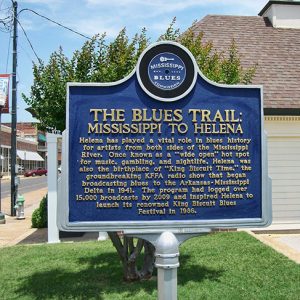 "Don't Throw Your Love On Me So Strong," Performed by Albert King "Your Love is Like a Cancer," Performed by Son Seals
Give Entry Feedback Blues Music