Cotton Plant, once the cultural center of Woodruff County, is in a rich cotton-producing area. Though the population has dwindled, it is still one of the most historical sections of the county.

Louisiana Purchase through Early Statehood
In 1820, the first white men came to the area from Mississippi, Tennessee, Virginia, and the Carolinas. They were settlers who subsisted on hunting and on trade. The small settlement was first called Richmond, though it is not known why, and included a blacksmith’s shop and a grocery store. In 1832, a group of settlers arrived from Kentucky and took up squatters’ claims.

William Lynch arrived from Mississippi in 1846 and built a house and a store. Beside the store, he planted cottonseed that he had brought from Mississippi, and it flourished. The plant was a novelty in the area and created much interest. People soon began calling the community Cotton Plant. When the town applied for a post office in 1852, another settlement had already claimed the name Richmond, so application was made and granted for Cotton Plant.

Civil War through Reconstruction
Many Cotton Plant residents joined the Confederate army during the Civil War, and the area saw action when 5,000 Confederate troops clashed with 20,000 Union troops marching from Batesville (Independence County) to Helena (Phillips County) on July 7, 1862. The Action at Hill’s Plantation, near Cotton Plant, resulted in a Union victory; many soldiers from both sides who died there were buried in the Indian mounds behind the plantation’s main house. The federal government later removed the bodies of the Union soldiers. Two additional unrelated military encounters took place near Cotton Plant in 1864, resulting in a Union victory on April 21 and a Confederate victory on April 22.

Early Twentieth Century through World War II
The completion of the Missouri and North Arkansas Railroad (M&NA) track from Helena to Cotton Plant in 1908 coincided with growth in the timber industry. In 1909, the Standard Stave and Hoop Mill located there, and, by 1920, the town was home to five large sawmills, seven woodworking factories, and the largest veneer plant in the state.

In the early 1900s, Cotton Plant was a cultural center. The Frances Opera House provided entertainment. Several music and literary clubs, including the Hypsion Club, which is still active, were organized, and residents often gathered for balls, dances, and performances. Many residents were proficient in piano, violin, and vocals and enjoyed sharing their talents.

The Presbyterian-run Cotton Plant Academy for African Americans opened in the 1880s and ran until the 1930s, at which point it merged with the Arkadelphia Presbyterian Academy; the joint venture continued to operate until 1950.

The Cotton Plant Water Tower was constructed in 1935 and is listed on the National Register of Historic Places.

Cotton Plant suffered greatly during the Depression. The price of cotton dropped to five to ten cents a pound (from a high of thirty cents), several of the stave mills closed, and two banks closed. Things were almost as bad during World War II, when most of the town’s young men went off to war. After the war, Cotton Plant quickly rebounded, experiencing its greatest prosperity in the 1950s.

Faubus Era through the Modern Era
When integration came to Cotton Plant Public Schools in 1968, many white families moved to Brinkley (Monroe County) and Des Arc (Prairie County), and the town’s population dropped drastically. In 2004, Cotton Plant schools were consolidated with those of Augusta (Woodruff County). The high school closed that year, and the elementary school closed in 2014.

In the twenty-first century, Cotton Plant has no industry and few businesses, and the city struggles economically. Much of the historic downtown has been demolished, and only a few of the fine old homes remain. The Cotton Plant Historical Museum was founded in 2014 to preserve the history of the area.

It was announced in early 2018 that the Bold Team LLC investment group had been awarded one of five cultivation permits for a medical marijuana operation. In January 2019, the group’s Cotton Plan greenhouse was the first to be approved for cultivation in the state. On March 27, 2022, suspected arson destroyed the historic Cotton Plant United Methodist Church, built in 1912.

Notable Figures
In 1929, Pearl Oldfield became the first woman from Arkansas elected to the U.S. House of Representatives, where she served from January 9, 1929, to March 3, 1931. “Sister Rosetta” Tharpe was one of gospel music’s first superstars and the first gospel performer to record for a major record label. Tharpe has been cited as an influence by numerous musicians, including Bob Dylan, Little Richard, Elvis Presley, and fellow Arkansan Johnny Cash.

For additional information:
Angelo, Mike, and Mrs. Dale McGregor. “How it Began at Richmond—Cotton Plant.” Rivers and Roads and Points In Between 1 (Fall 1972): 20–22.

My family migrated to Cotton Plant in the 1800s from Haiti in search of work. My great-grandfather was a sheriff there. Full name not known but people called him PaPa West or used his adopted name Smith. 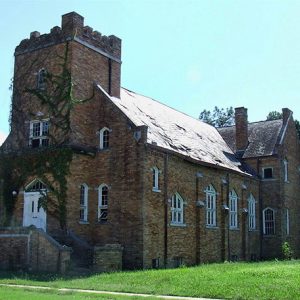