Termites belong to the Phylum Arthropoda, Class Insecta, Infraorder Isoptera, and Order Blattodea. They were formerly placed in a separate order (Isoptera) from the cockroaches (Blattodea), but Isoptera is currently classified at the taxonomic rank of infraorder. About 3,106 species are currently described within twelve families, with a few hundred more to still be described. There are several species of termites in Arkansas. Termites are among the most successful groups of insects on Earth, colonizing all continents except Antarctica. Comparatively speaking, the diversity of termite species is rather low in North America and Europe (fifty species are known from North America, and only ten species occur in Europe), but it is higher in South America, where over 400 species are …

Ruth Harris Thomas was a highly regarded amateur ornithologist whose column on birding in Arkansas was published by the Arkansas Gazette for about forty years. Her column not only documented area birds, but it also contributed to a growing appreciation for birds, birding, and habitat conservation. Ruth Harris was born in Kentucky on August 25, 1900, to Charles O. Harris and Columbia B. Cox Harris. She had two brothers. Majoring in English and journalism, Harris graduated from Louisiana State University in 1923, where she also edited the student newspaper. She moved to Little Rock (Pulaski County) in the autumn of 1923 to work as a reporter for the Arkansas Gazette newspaper. In 1927, she married Maine native Stanley Powers Rowland … Thrips belong to the Phylum Arthropoda, Class Insecta, and Order Thysanoptera. They are minute (most are less than 1 mm long), slender insects with fringed wings and distinctive asymmetrical mouthparts. There are currently over 7,700 species-groups of recognized thrips, grouped into 780 extant and fifty-eight fossil genera. The traditional classification of the order recognizes nine families for extant species (plus five fossil families), with two subfamilies in the Phlaeothripidae (the only family in suborder Tubulifera) and four subfamilies in the Thripidae (one of eight families comprising suborder Terebrantia). The earliest recorded mention of thrips is from the seventeenth century and was a sketch made in 1691 by an Italian Jesuit scholar, Philippo Bonanni (1628‒1723). In 1744, the Swedish entomologist Baron … Ticks belong to the phylum Arthropoda, class Arachnida, subclass Acari, suborder Parasitiformes, and order Ixodida (Metastigmata), which includes almost 900 recognized species. There are three families: Ixodidae, or the “hard” ticks (approximately 700 species); Argasidae, or the “soft” ticks (approximately 200 species); and Nuttalliellidae, containing only a single species, Nuttalliella namaqua, a tick found only in southern Africa. In Arkansas, nine genera and a total of nineteen species (three argasids and sixteen ixodids) are known. Another species, Rhipicephalus (Boophilus) annulatus, has been extirpated from Arkansas. Ticks are a highly specialized group of obligate, bloodsucking, nonpermanent ectoparasitic arthropods of vertebrates (mostly on reptiles, birds, and mammals) and are distributed throughout the world. In addition to being irritating to hosts and causing …

Topminnows belong to the Family Fundulidae, Order Cypriniformes, and Class Actinopterygii. This family also includes some North American killifishes. There are approximately forty-four to forty-six species that are found in the lowlands of North and Central America from southeastern Canada to the Yucatan Peninsula of Mexico, including the Mississippi River drainage, and the islands of Bermuda and Cuba. Most (forty species) of topminnows belong to the genus Fundulus, and others are included in the genera Lucania (three species) and Leptolucania (a single species). The Family Fundulidae is a paraphyletic grouping of members of genera Fundulus and Lucania. There are six species of topminnows found in Arkansas. Topminnows occur in both freshwater and marine waters as well as brackish environments. They …

aka: Flatworms
aka: Flukes

Trematodes (flukes) include parasitic flatworms belonging to the phylum Platyhelminthes, class Trematoda, and subclasses Aspidogastrea (two orders, four families) and Digenea (ten orders, more than seventy-two families). The class numbers between 18,000 and 24,000 species; they are found primarily in a variety of animals, including humans and other vertebrates. Modern phylogenetic analysis reveals that the worms of class Monogenoidea (monogenetic flukes) are no longer included within the Trematoda and are more closely related to tapeworms. The modern mobility of human beings, combined with the international transportation of animals and foodstuffs that can be infected, means that diagnoses can occur well outside the areas where trematode species are endemic. However, while trematodes do occur in Arkansas, they do not pose a …

Turpentine Creek Wildlife Refuge near Eureka Springs (Carroll County) is a 501(c)(3) nonprofit organization providing lifetime homes for abandoned, abused, and neglected big cats and other endangered wildlife. With over 450 acres and more than 120 exotic cats, the refuge is one of the largest big cat sanctuaries in North America licensed by the U.S. Department of Agriculture (USDA). The sanctuary is rated a “Must See” attraction by the Arkansas Department of Parks and Tourism and is one of the most popular destinations in the Eureka Springs area. Don Jackson, a former employee of the Dallas Zoo, along with his wife, Hilda, and their daughter, Tanya Smith, founded the refuge in 1992. After a friend acquired a lion cub and realized … 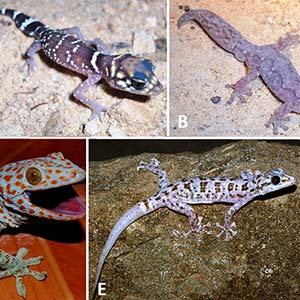 Arkansas hosts about forty-five species and subspecies of snakes, and six (thirteen percent) are species that use venom to obtain food and to defend themselves. There are two families of venomous snakes in the state: Elapidae (a single elapid species, the Texas coral snake) and Viperidae (five species of pitvipers). All of Arkansas’s venomous snakes inject venom through fangs via muscular contraction of paired venom glands. Texas Coral Snake The Texas coral snake, Micrurus tener tener (formerly Micrurus fulvius tenere) is a tricolored, medium-sized (maximum length = 122 centimeters), secretive elapid snake that primarily occurs in the southern and southwestern part of the state. Verified records are available for only five counties of the state in the Gulf Coastal Plain, … 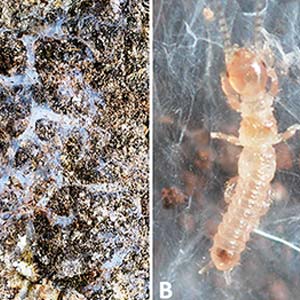 Webspinners or footspinners belong to the Phylum Arthropoda, Class Insecta, Subclass Pterygota, and Order Embioptera. They are a small group of mostly tropical and subtropical insects. More than 400 described species in eleven (eight extant) families are known, but it has been estimated that there might be around 2,000 extant species. Only three families (nine species) are present in North America: Anisembiidae (two species), Oligotomidae (three species), and Teratembiidae (four species). All of these occur in the southern United States, and most have fairly restricted ranges. At least two species occur in Arkansas, although very little is known about the embiopterans of the state. Embiopterans are found on every continent except Antarctica, with the highest density and diversity of species … The willow flycatcher (Empidonax traillii) is the only bird species that has been discovered in the geographic area that is now the state of Arkansas. The noted naturalist and painter John James Audubon found the bird in 1822 while he was traveling near the community of Arkansas Post (Arkansas County), in what was then Arkansas Territory. When Audubon described the species in print for science in 1828, he named it Traill’s flycatcher for his friend Dr. Thomas Traill of Edinburgh, Scotland. Ornithologists have since determined that “Traill’s flycatcher” is really two different species, willow and alder flycatchers, which have almost identical appearances but distinctive vocalizations. The form Audubon discovered is of the species that was renamed willow flycatcher in 1973. …