The town of Lonoke is the only county seat in Arkansas that shares its name with the county it serves. It is located near the geographical center of the state, twenty-two miles east of Little Rock (Pulaski County) on the western edge of the Grand Prairie. Primarily supported by agriculture and aquaculture, Lonoke is a major source of the state’s rice, soybeans, and aquatic exports and serves as home for many businesses and the residents who are employed there.

Civil War through Reconstruction
In 1858, the Memphis and Little Rock Railroad was building its tracks through Brownsville, then the county seat of Prairie County, located three miles north of the future town of Lonoke. Five years later, during the Civil War, the tracks were destroyed during a skirmish at Brownsville. After the war, the company decided to take a more direct route and bypass Brownsville, resulting in its eventual demise and the birth of the town of Lonoke.

Lonoke was named by one Major Rombaugh, a civil engineer who surveyed the Memphis and Little Rock Railroad right-of-way, and another man named Robinson. The two men had a contract with the railroad to relocate the depot from Hick’s Station, established around 1868, which was approximately two miles east of the town. They suggested naming the town for a massive lone red oak tree that stood isolated on the prairie. Rombaugh spelled the word to give it, as he thought, a Native American sound of “Lo-no-kah,” but everyone else pronounced it “Lone-oak.”

Isaac C. Hicks and Hamilton Reynolds surveyed the site and completed the town-lot plan in 1869. The first business in Lonoke was the general store W. K. Hocker and Company, which moved from Hick’s Station to the new town site in 1868, before it was laid out. In 1869, T. C. Beard and William Goodrum opened a general store.

Lonoke was incorporated as a town on January 22, 1872, and elected its first officials, headed by Mayor Isaac C. Hicks. On April 16, 1873, Lonoke County was created from portions of Prairie and Pulaski counties, with Lonoke the county seat. Within three years, the population had grown to almost 500 people, as most of the citizens of Brownsville moved south with the railroad. By 1910, the population had grown to 1,547.

The first courthouse was the building formerly used as the Prairie County Courthouse in Brownsville that was dismantled, moved to Lonoke, and reassembled. In 1928, the town built a new three-story brick courthouse, with the county jail located on the top floor. This building still serves as the current courthouse, though the jail has moved to another site.

Post-Reconstruction through the Gilded Age
The local newspaper, The Lonoke Democrat, originally was the Prairie County Democrat, which was published by John C. England and George M Emack in DeValls Bluff (Prairie County). The owners moved the paper in 1873, when Lonoke was made the seat of the new county, and renamed it Lonoke Democrat.

In April 1875, the first fire department, known as the Fire Hook and Ladder Company, was organized with J. F. Clement as foreman. In 1927, a water and sewer system was installed through passage of a bond issue.

By 1879, the need for free public education became apparent. To supplement meager state funds set aside for this purpose, the citizens of Lonoke privately subscribed a total of $10,000 which, added to the state funds, enabled them to inaugurate a free ten-month public school. In 1900, a colossal school building (reputed to be the largest wooden-frame structure in Arkansas, with its two stories and three wings) was built. It burned in 1931, and a brick school was built that continues today as the high school. The Lonoke Colored School began around 1878 with classes through the eighth grade.

Originally, Lonoke was cattle and lumber country, but later, the prairie lands were converted to farmlands. Cotton, corn, and hay were grown and shipped out on its railways. In the spring of 1897, W. H. Fuller planted the first rice crop in Lonoke County. The flat land, with its abundance of water, was ideal for this new crop, and soon, rice rivaled cotton as the area’s most profitable harvest. Around 1940, soybeans joined the agricultural mix, and today it is also a crop of economic importance to the area.

In 1898, three men were shot and killed in what came to be known as the Eagle-Booe Feud.

Early Twentieth Century through Modern Era
The Lonoke Confederate Monument was erected in 1910, mainly due to the efforts of the United Daughters of the Confederacy, and has since been added to the National Register of Historic Places.

In 1928, the Arkansas Game and Fish Commission built what was then the world’s largest fish hatchery on the south edge of town. Today named the Joe Hogan Fish Hatchery, its fifty-seven ponds cover 267 acres and comprise the largest state-owned fish hatchery. Farmers developed much of the flat land around Lonoke into their own fish and minnow farms, creating another large part of the local economy.

During World War I, Lonoke was adjacent to Eberts Field, the second largest training center for Army aviators (maintained by the government in the United States and France). At its peak, the 960-acre base, just west of town, housed approximately 1,500 enlisted men and officers and thousands of planes. The armistice ending the war was signed on November 11, 1918, a short time before the first class could be graduated. In 1986, a historical marker was installed to commemorate the location of the field, which closed in 1919, as part of the Arkansas Sesquicentennial Celebration.

In 1945, the name of the black school changed to George Washington Carver School when it expanded its curriculum through high school. The schools integrated in 1970, with Carver school continuing as the middle school. (The old Carver Gymnasium, constructed in 1957, is listed on the National Register of Historic Places.) In 2004, a bond issue was passed to build a new middle school and gymnasium.

Despite its reputation for agriculture and aquaculture, Lonoke has attracted industries such as MKT Fastening, Remington Arms, Ammonia Hold, Inc., and LLC Industries. The population of Lonoke has grown steadily (although it has remained around 4,000 since 1980), in part due to an abundance of industrial, agricultural, retail, healthcare, and educational employment opportunities. As of the 2010 census, approximately twenty-five percent of Lonoke’s population is African American, comprising a comfortable middle class with some prosperous farmers and businessmen. Interstate 40 provides convenient access to Little Rock and other cities; the town thus serves as a bedroom community for larger towns. Lonoke continues to attract new citizens, businesses, and industries to this centrally located town on the Grand Prairie of Arkansas.

Famous Residents
Lonoke has provided the state with two governors: James P. Eagle in 1888 and Joseph T. Robinson in 1913. Robinson also served as a congressman and U.S. senator and was the Democratic candidate for vice president in 1928 (the state’s first candidate on a major ticket). Lonoke also produced William Claude Bradford, who served as assistant adjutant general of the Arkansas National Guard in World War I; William Heber McLaughlin, who served in France during World War I and became a member of the Arkansas General Assembly; and Captain Maurice Lee “Footsie” Britt, who was decorated with the Congressional Medal of Honor in World War II and served as Arkansas’s lieutenant governor from 1966 to 1970.

Other natives of Lonoke include: pioneering U.S. Navy aviator Frank Robert McCrary; Eddie Hamm, called “the South’s first national champion” by the Atlanta Journal, who set an Olympic record in the broad jump in the 1928 Olympics in Amsterdam; Jim Lee Howell, who served as head coach of the New York Giants from 1954 to 1960, winning the championship in 1956; and Elsijane Trimble Roy, who was named the state’s first female judge in 1966 and Arkansas’s first female federal judge in 1977.

The new Lonoke High School was completed in July of 2011. In spring 2013, a new multipurpose center was under construction. It added a new gym and a new cafeteria, and is the home of the new band/choir rooms. 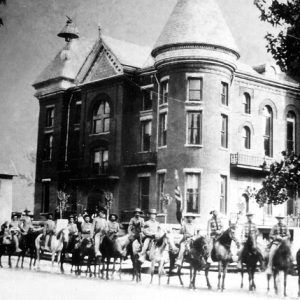