The Arkansas Sesquicentennial Celebration was a year-long event in 1986 commemorating the 150th anniversary of Arkansas’s admission into the Union. The celebration sparked a renewed interest in Arkansas and local history.

The Sesquicentennial Commission was made up of prominent state and local leaders, including author Dee Brown, historian Ruth Polk Patterson, state Representative Carolyn Pollan from Fort Smith (Sebastian County), Bob Besom of Springdale (Washington County), Mary Gay Shipley from Blytheville (Mississippi County), and Bill Worthen, director of the Arkansas Territorial Restoration (now the Historic Arkansas Museum). The daily operations of the commission were handled by a hired staff. Virginia Fouse served as the first executive director of the commission, and Nan Brown served from November 1985 to August 1986, coordinating the work of the commission. Dillard and his staff established a statewide network of county coordinators to help with planning and implementing local events.

In January 1983, the commission announced a contest for an official logo. A design by Linda Ridener of Fort Smith, selected from more than 400 entries, was unveiled on June 15, 1983. It featured a skyline that included a skyscraper in the shape of Arkansas, as well as additional agriculture- and water-related design elements.

Arkansas artist Roger Carlisle was commissioned by the United States Postal Service to paint an image for a commemorative stamp for the anniversary. The stamp featured the Old State House façade and portions of its front grounds. Missing from the image was “Lady Baxter,” a Reconstruction-era cannon located on the grounds, because the Postal Service did not want to militarize the design.

The commission also sanctioned a series called “Project Pride,” consisting of brief biographical sketches of 150 prominent Arkansans, which ran daily in the Arkansas Democrat from January to June 1986. Other newspapers published articles highlighting local history. Several works of history were published in honor of the celebration, including a new junior-high-level Arkansas history textbook and several county and town histories. The state’s major electric company, Arkansas Power and Light (AP&L), underwrote “Arkansas (You Run Deep in Me),” a song written by native Arkansan and country musician Wayland Holyfield to celebrate the sesquicentennial and his love of the state.

A wagon train began in Fayetteville (Washington County) on March 1, 1986, and ended June 13, 1986, in Little Rock (Pulaski County) after traveling around the state at four miles per hour. The goal of the wagon train was to unite all Arkansans by traveling within fifty miles of most communities in the state. Ironically, the wagon train broke into two factions because of in-fighting, with the two segments following different routes. Communities planned events such as historical pageants, craft shows, and musical entertainment to coincide with the wagon train’s nightly camp.

Highlighting the year-long celebration was a “Salute to Statehood Weekend” held in Little Rock during the weekend of June 13–15, 1986. The three-day event attracted more than 300,000 people and began with “Fanfare for the Future.” Held at War Memorial Stadium, the event featured musical acts in addition to entertainers, sports figures, and others with Arkansas ties, such as Floyd Cramer, Charlie Rich, Tess Harper, Wayland Holyfield, Mary Steenburgen, and Sidney Moncrief. On June 14, a “Parade of Counties,” was held in downtown Little Rock during the morning, while the “Taste of Arkansas History Tour” was held at six different venues, highlighting entertainment, fashions, crafts, and food from six eras in the state’s history. On Sunday, June 15, the official date of statehood, a morning ecumenical service was held at Riverfront Park in Little Rock. Governor Bill Clinton closed the sesquicentennial year with an address in which he invited Arkansans to reflect on the state’s history and dedicate themselves to an exciting future.

The Arkansas Sesquicentennial Celebration was remarkable for its long-term impact. The celebration spawned a movement to ensure that Arkansas history was included in the state educational curriculum and vastly increased the published body of works on Arkansas. 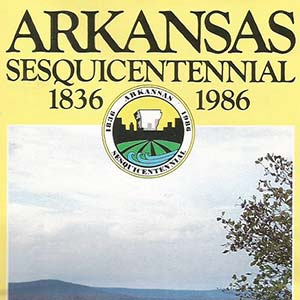 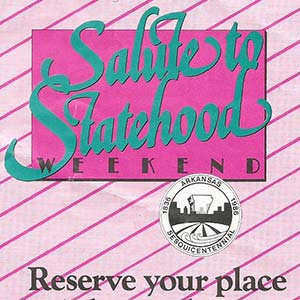