Established next to the town of Lonoke in 1917, during World War I, Eberts Field ranked second among aviation training fields maintained by the U.S. government, and it was one of the leading training centers for aviators during the war. Named for West Point graduate Captain Melchior McEwan Eberts, an early Arkansas aviator, it had an enlistment of about 1,000 cadets being trained in aviation. About 1,500 enlisted men and officers were stationed at the field.

Lonoke County outbid Pulaski County to get the aviation school to locate in Lonoke, which offered 960 rent-free acres and a new railroad spur connecting the field with the Rock Island Railroad tracks. The U.S. government accepted the Lonoke offer on November 19, 1917, and construction started December 19. The first cadets and soldiers arrived in the spring of 1918.

The Lonoke Cemetery was across the road from the airfield. The instructors used the cemetery as a grim reminder of where the cadets who made mistakes would end up. The training planes—the Curtis JN-4D, or “Flying Jenny”—were known as “flying coffins.”

From early March 1918 until March 1919, thousands of airplanes were used for training at Eberts Field. The Arkansas Gazette reported that it was not uncommon to see several hundred planes flying in formation over the field. Planes from training schools in adjoining states sometimes joined them.

On November 21, 1919, an army flying team called the Flying Carnival visited Eberts Field for stunt flying exhibitions. A crowd of more than 3,000 viewed one exhibition from the banks of the Arkansas River at Little Rock (Pulaski County), where the fliers in their open-cockpit flying machines appeared out of the skies at 3,000 feet to swoop under the bridges spanning the river. The next day, about 2,000 boarded trains from Little Rock to see the daring fliers perform at Eberts Field.

The Eberts Field aviation school never had the opportunity to train pilots fully. World War I ended on November 11, 1918, shortly before the first class graduated.

Few visible signs of Eberts Field remain—only the land and some concrete foundations. The Lonoke golf course now covers the airfield. During Arkansas’s Sesquicentennial Celebration, the Lonoke County Arkansas Sesquicentennial Committee placed a marker with a brief history of where Eberts Field had been. Until several years ago, there was a 20-foot mound of dirt at the northeast end of the field. This was once the target for many thousands of rounds of machine gun bullets. Here, the fledgling aviators learned some of the fundamentals of operating a machine gun while flying an airplane. The mound disappeared long ago because of farming.

The first newspaper in Arkansas to be delivered by plane was the Arkansas Gazette. On June 18, 1919, Lieutenant C. E. Johnson of Eberts Field delivered 300 papers to Lonoke in his plane to demonstrate the possibilities of aviation. 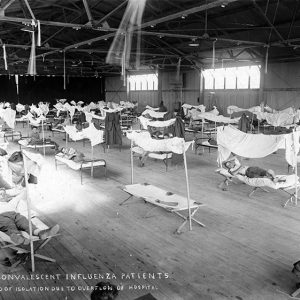