Located at the intersection of Highways 167 and 79 in south central Arkansas, Fordyce was established in 1882 and named for Colonel Samuel Wesley Fordyce, a railroad builder and developer. It has long been a center for the timber industry in southern Arkansas.

Pre-European Exploration
Prior to European settlement, present-day Fordyce was inhabited by ancestors of the Caddo. Although no historic Caddo communities existed there, artifacts of Native American life are occasionally found in the area.

Louisiana Purchase through Reconstruction
Fordyce was a relatively late bloomer in Dallas County as compared to centrally located Princeton (Dallas County), which was incorporated in 1849 and served as the first county seat, and Tulip (Dallas County), which was considered the cultural center of Arkansas in the mid-1800s. Settlers began to make their way into the southeast part of the county by the late 1850s, and small trade centers such as Bucksnort (Dallas County) and Chambersville (Calhoun County) began to develop near present-day Fordyce. Prior to 1850, the land that became Fordyce was partly cleared and settled by W. W. Killabrew. No Civil War battles were fought in the present-day Fordyce area, but in April 1864, battles were fought at nearby Marks’ Mills and Jenkins’ Ferry. In the 1870s, Henry Atkinson, an African American, secured the land that would become Fordyce and later sold it for $118 to Dr. Algernon Sidney Holderness, who built a sawmill on the site.

Post Reconstruction through the Gilded Age
In the late 1870s, Col. Samuel Fordyce made three trips by horseback between Cairo, Illinois, and Texarkana (Miller County), selecting the best route for the Texas and St. Louis Railway Company (later the St. Louis, Arkansas and Texas Railway, often called the Cotton Belt). Land along the chosen route was purchased in southeast Dallas County from Dr. Holderness, and the new town site of Fordyce was platted. Fordyce was incorporated on April 8, 1884, and grew along with the development of railroad transportation. Early in the town’s history, there were ten stores, two liveries, a hotel, a railroad depot, and church congregations accommodating Methodists, Baptists, and Presbyterians. The first post office was located in George W. Stevenson’s store. Stevenson was postmaster; Virgil R. Harris was assistant postmaster. The Fordyce Enterprise, established in 1884 by James Madison Raines, was the first newspaper in the county.

Early Twentieth Century
The county seat was moved from the non-railroad town of Princeton to Fordyce, which was on the Cotton Belt and Rock Island railroads, in 1908. Organizations found in Fordyce in the early twentieth century included the EM Lodge 363, the Eastern Star, the Culture Club, the Sesame Club, the American Legion Post, the Music Club, the Business and Professional Women’s Club, the Rotary Club, the American Legion Auxiliary, and the Lion’s Club. Many social functions were held at the Kilgore Hotel.

During the Great Depression, most farmers used wells for water, collected wood for heating and cooking, and grew their own food. Some townspeople had gardens and a few chickens, but the Depression was difficult for many. The government provided commodities through the United States Department of Agriculture (USDA) and built canning kitchens. The Civilian Conservation Corps (CCC) and the Works Progress Administration (WPA) provided some employment.

World War II through the Modern Era
Patriotism ran high during World War II, and many citizens in the Fordyce area served their country. Those on the home front also contributed; many worked at the Shumaker Ordnance Plant at East Camden (Ouachita County) or the Pine Bluff Arsenal.

Allied Telephone Company in Fordyce was responsible for the first person-to-person direct distance telephone call in the United States, dialed in 1961. Georgia-Pacific Corporation purchased the Fordyce Lumber Company in 1963 and opened the world’s first southern pine plywood plant in Fordyce the following year.

Industry
The main economic industry has always been timber. Fordyce Lumber Company was established in 1889, and by 1932, it employed twenty-five percent of the working population of Fordyce. The lumber company was purchased in 1963 by Georgia-Pacific Corporation. Koch Industries purchased Georgia-Pacific in 2005 but retained the Georgia-Pacific name.

Millcreek of Arkansas, established in 1988, is a major area employer, providing residential services for mentally challenged and psychiatric patients.

Attractions
The Dallas County Museum and Museum Annex are located in early buildings on Main Street. Steam Locomotive 101, used by the Fordyce and Princeton Railroad Company from 1931 to 1960 to haul logs to the mill and around the log yard, is on permanent display at the old Cotton Belt Railroad Depot. The oldest building in the city is the 1875 Fielder House. The Fordyce Commercial District, listed on the National Register of Historic Places, reflects the popular commercial architectural styles of the late nineteenth and early twentieth centuries and includes the Home Accident Insurance Building designed by architect Charles L. Thompson, who also designed the local Waters House. The Charlotte Street Historic District, also listed on the National Register of Historic Places, contains many Craftsman bungalow–style homes; another Craftsman-style house of note is the Elliott House. The 1904 Classical Revival–style Wynne House, listed on the National Register of Historic Places, houses the Wynne Phillips Bed & Breakfast. The Dallas County Courthouse, built in 1911, is another example of a Classical Revival style building listed on the National Register and serves as a landmark in Dallas County. The First United Methodist Church, designed by John Parks Almand, is also on the National Register, as is the First Presbyterian Church. Klappenbach Bakery, established in 1975, was featured in both Southern Living and the Arkansas Times, though it closed in 2011. The annual Fordyce on the Cotton Belt Festival is held in late April and honors the role that the railroad has played in the town’s history.

Famous Residents
Coach Paul William “Bear” Bryant was the “winningest coach in football history” until 1989. Redbug Field, the high school football field where he learned to play, is listed on the Arkansas Register of Historic Places. Johnny Cash, who reputedly regarded Fordyce as home, brought his musical entourage to perform at an early Fordyce on the Cotton Belt Festival. A. B. Banks, an insurance company executive and bank president, built Pine Shadows, a Charles L. Thompson–designed mansion surrounded by landscaping designed by George Kessler. During World War II, John Smith Thach developed a fighter plane tactic called the “Thach Weave,” which is still used by fighter pilots. James A. Gay, the first licensed African-American undertaker in Nevada and a member of the Nevada Athletic Commission, was also an executive at the Sands Hotel. Coach Jimmy “Red” Parker coached the Redbugs in a thirty-eight-game winning streak. Two of the five band members of the Rolling Stones were arrested in Fordyce in 1975. Rosemary Ellis is editor-in-chief of Good Housekeeping magazine. Major General Ray Edison Porter was born and buried in his hometown of Fordyce. Attorney General Ike Murry was also born in Fordyce and grew up there. 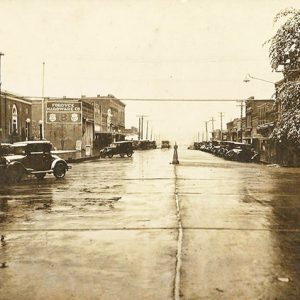