The St. Louis Southwestern Railway began in Tyler, Texas, in 1875. Construction began in Arkansas in 1881. When completed in 1883, the railroad ran diagonally across the state from Texarkana (Miller County) to St. Francis (Clay County). In 1930, the company operated 712 miles of track in Arkansas. The Cotton Belt, as it was better known, would reach its peak mileage in the state in the early 1930s. By the middle to late 1930s, the Great Depression and declining passenger revenue led the railroad to begin abandonment of many of its subsidiary companies and branch lines. Southern Pacific Railroad gained control of the Cotton Belt in 1932 in an effort to gain connections to eastern markets at St. Louis, Missouri, and Memphis, Tennessee. The Cotton Belt shops in Pine Bluff (Jefferson County) were the railroad’s primary repair and construction facility for freight cars, passenger cars, and locomotives. As part of the Southern Pacific Railroad, the Cotton Belt was merged with the Union Pacific Railroad in 1996, and by the late 1990s, their massive shop facility in Pine Bluff was closed.

The complex history of the Cotton Belt begins in Tyler, Texas. The Tyler Tap Railroad Company was chartered in December 1871. Construction of the narrow-gauge (three feet wide as opposed to the standard gauge of four feet, eight and one-half inches) railroad began in 1875. The small railroad was a complete failure and fell under the control of a group of St. Louis investors led by James W. Paramore. Paramore, owner of the St. Louis Compress Company, saw this railroad as a key link in establishing St. Louis as the primary gateway for selling southwestern cotton to eastern markets. These new investors created the Texas and St. Louis Railway.

Shortly after incorporating in 1879, the railroad began construction in the vicinity of Texarkana, Texas, with the hope of connecting to the St. Louis, Iron Mountain and Southern Railroad. With three years of construction in east Texas already completed, Paramore and his investors had the beginnings of a railroad to St. Louis. Jay Gould, owner of the Missouri Pacific and Texas and Pacific railroads saw this renewed construction as dangerous to his business interests. He purchased the St. Louis, Iron Mountain and Southern in 1881 and canceled business agreements with the Texas and St. Louis in hopes of crushing the competition.

His hand forced by Gould’s moves, Paramore began to plan a railroad that would connect Texarkana with St. Louis. Paramore chose his acquaintance Samuel W. Fordyce to complete the survey of the route across Arkansas, making connections with the Little River Valley and Arkansas Southern Railroad at Malden, Missouri, and with the Texas and St. Louis Railway at Texarkana, Texas. With Fordyce’s survey complete, construction began in 1881 and was finished in 1882, with the exception of a thirty-five-mile stretch between Pine Bluff and Clarendon (Monroe County). Completion of this final and difficult section was made at Rob Roy (Jefferson County) on the Arkansas River Bridge on August 12, 1883.

The complete railroad was 723 miles long and stretched from Bird’s Point, Missouri, to Gatesville, Texas. It entered Arkansas at St. Francis and traveled through the towns of Piggott (Clay County), Paragould (Greene County), Jonesboro (Craighead County), Brinkley (Monroe County), Pine Bluff, Rison (Cleveland County), Fordyce (Dallas County), Camden (Ouachita County), Lewisville (Lafayette County), and Texarkana. This ambitious construction program proved to be too great a financial burden on the company, and the choice of narrow gauge limited how effectively the railroad could compete with the parallel St. Louis, Iron Mountain and Southern.

The Cotton Belt was foreclosed and placed into receivership in January 1884. From this receivership emerged the St. Louis, Arkansas and Texas Railway and the St. Louis, Arkansas and Texas Railway of Texas. Samuel Fordyce was named president of both companies. Under Fordyce, the railroad was converted to standard gauge by October 18, 1886, and began construction of branch lines to increase business. In Arkansas, this included the forty-three-mile Little Rock Branch from Altheimer (Jefferson County) to what is now North Little Rock (Pulaski County) and the Shreveport Branch from Lewisville to Shreveport, Louisiana.

Reorganization of the railroad in 1884 kept it from control by Jay Gould. Fordyce however, made a secret agreement in 1888 to work with Gould and operate the Cotton Belt in conjunction with the St. Louis, Iron Mountain and Southern as one railroad. Through direct loans and ownership of stock, Gould gradually gained control of the St. Louis, Arkansas and Texas Railway and, on June 1, 1891, reorganized the company as the St. Louis Southwestern Railway—though Gould suggested the name should officially be the Cotton Belt Railroad.

With Gould’s ownership came a period of great prosperity for the railroad. The railroad was finally connected to St. Louis and Dallas, Texas. It had been giving its Memphis-bound passenger cars to the St. Louis, Iron Mountain and Southern at Fair Oaks (Cross County) since 1892. The Cotton Belt forged agreements with the Chicago, Rock Island and Pacific Railroad (Rock Island)—in 1912 for passenger service and in 1921 for freight service—to run Cotton Belt trains on Rock Island tracks from Brinkley to Memphis.

Edwin Gould, Jay Gould’s second son, succeeded Fordyce as president of the Cotton Belt. When he retired in 1925, the Gould family relinquished control of the railroad. The Rock Island purchased controlling share of the stock, but as soon as it gained control, it sold to the Kansas City Southern Railroad. The Kansas City Southern had plans for a large regional railroad system, including the Missouri-Kansas-Texas Railroad, but these were not approved by the Interstate Commerce Commission (ICC).

The Cotton Belt was sold to New York Investors, Incorporated, and underwent a second period of expansion. This St. Francis Basin project began in 1929 and was undertaken to reach the timber and farm lands of northeast Arkansas. Through this program, the Cotton Belt acquired six railroads in northeast Arkansas, invading what had been St. Louis–San Francisco Railroad territory.

Many of these smaller railroads were abandoned in the middle to late 1930s. The main line of the Cotton Belt continues to be an important part of the Union Pacific Railroad system connecting the Midwest with the Southwest. Through the Cotton Belt, Union Pacific also operates the former Rock Island line from Brinkley to Memphis. Much of the once mighty shops at Pine Bluff are gone, but the Arkansas Railroad Museum is housed in what was once the locomotive fabrication building. The museum also maintains one of the last Pine Bluff–built Cotton Belt steam locomotives, the 819. 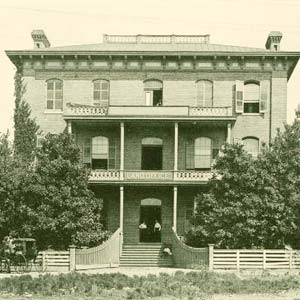