Hydroelectric power is the electricity generated by the gravitational force of falling or flowing water through a turbine connected to a power generator. The three major types of hydropower facilities include reservoirs (high dams), in-stream (low dams), and pumped-storage. The most common type is the high dam, which creates significant reservoirs behind the dam (e.g., Hoover Dam). In 1882, the world’s first hydroelectric power station, located in Appleton, Wisconsin, produced 12.5 kilowatts of electrical power. Also in the early 1880s, a similar facility opened in New York City. Since these early facilities, hydroelectric power from the nation’s waterways has proliferated.

The first hydroelectric power facility in Arkansas was Remmel Dam, built in 1924 by AP&L, now Entergy, on the Ouachita River at Jones Mill (Hot Spring County). This facility provided power to southern Arkansas and surrounding states and helped make AP&L a major utility corporation. In 1925, the Arkansas-Missouri Power Company constructed a hydroelectric plant at the Mammoth Spring Dam No. 1 in Mammoth Spring (Fulton County). This plant supplied power to the surrounding area until 1972. AP&L built Carpenter Dam, which created Lake Hamilton, and its second hydroelectric plant upstream from Remmel Dam and Lake Catherine was completed in 1931.

The second period of hydroelectric power development was triggered by the federal Flood Control Acts of 1938, 1941, and 1954, which authorized the USACE to construct six dams and multipurpose reservoirs in the White River basin for flood control, hydroelectric power generation, water supply, and other uses. Three dams were built on the White River, resulting in Beaver, Table Rock (in Missouri), and Bull Shoals lakes. One dam was built on the North Fork River, creating Norfork Lake, and one dam was built on the Little Red River, creating Greers Ferry Lake. These lakes are technically called “reservoirs.” The sixth proposed dam/reservoir was planned for the Buffalo River near Gilbert (Searcy County) but was never built due to the lack of state support and federal funding appropriation. The Buffalo was later protected by federal legislation and named the first national river in the United States. Additional dams and multipurpose reservoirs providing hydroelectric power were built on the Little Missouri River (Lake Greeson), the Ouachita River (Lake Ouachita—upstream from Carpenter and Remmel dams), and the Caddo River (Lake DeGray). Electrical power from these facilities is sold to Southwest Power Administration of the U.S. Department of Energy.

Additional hydroelectric facilities developed during the second period included those on the Arkansas River, as components of the McClellan-Kerr Arkansas River Navigation System, also constructed by the USACE. These hydroelectric plants include Dardanelle and Ozark lakes, both deep in-stream pools behind navigational locks and dams, lacking the flood control benefit of the aforementioned multipurpose reservoirs. The Ozark plant, with its inclined-axis turbines designed for low power head operations, is radically different from the normal vertical turbines used in most power projects.

Although the third period of hydroelectric power development took place on the Arkansas River, the sponsoring agency was the Arkansas Electric Cooperative Corporation and not the USACE. When the McClellan-Kerr Arkansas River Navigation System was planned and designed in the early 1960s, interest in its potential for hydroelectric power was limited to only Ozark and Dardanelle. Since that time, interest has grown, driven primarily by rising electrical energy costs, and four additional hydroelectric plants were constructed at existing locks and dams on the Arkansas River. Three of the facilities—Ellis, Whillock, and Dam 2—were built by the AECC, and the fourth, Murray, was developed by the city of North Little Rock (Pulaski County).

In the twenty-first century, three new dams were added to the White River, near Batesville (Independence County), Earnheart (Independence County), and Marcella (Stone County). The first two dams were built within one-hundred-year-old locks, while the third is a green field application with the powerhouse built opposite the lock because of the proximity of the railroad.

Although Arkansas has the potential to produce a significant amount of its electrical energy from hydroelectricity, based on the nearly 1308.8-megawatt capacity, only three percent of Arkansas’s electrical energy in 2006 was from hydroelectric sources. This compares to almost fifty percent from coal, almost one-third from nuclear, and almost twelve percent from natural gas sources. In 1990, more than nine percent of Arkansas’s electrical energy was from hydroelectric sources. Peak generation from hydroelectric power occurred in 1985 at 4,434 million kilowatt hours (kWh), almost three times the 2006 amount of 1,551 million kWh. This decline is surprising, considering the increasing emphasis on renewable electrical energy sources and the existing hydroelectric infrastructure in Arkansas. Although the development costs of a hydroelectric plant can be costly, once completed, maintenance and operation costs are low, there is no air pollution, and there is little concern over fluctuating fuel costs. Coal, nuclear, and natural gas are preferred over hydroelectric due primarily to controllability and much greater output capability. Although hydroelectric power is considered “green” and renewable, this is accurate only if sediment does not accumulate behind dams, which is unlikely. Reservoirs also result in flooding, which can destroy thousands of acres of lowland habitat. Freshwater aquatic ecosystems downstream from dams are also impacted as much colder water temperatures from reservoir releases no longer support native fish species. 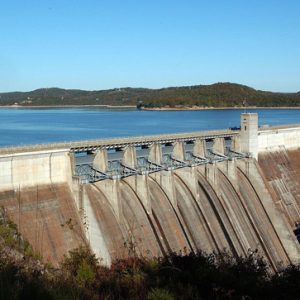