The Dalton Period extends from 10,500 to 9,900 radiocarbon years ago (circa 8500 to 7900 BC), during which there existed a culture of ancient Native American hunter-gatherers (referred to as the Dalton people) who made a distinctive set of stone tools that are today found at sites across the middle of the United States. The name “Dalton” was first used in 1948 to refer to a style of chipped stone projectile point/knife. The Dalton point was named after Judge Sidna Poage Dalton, who had found numerous Dalton sites in central Missouri. Evidence of the Dalton culture has been found throughout the Mississippi River Valley. As Dalton points were found in different regions of the mid-continent, they were given different names, …

Daughters of the American Revolution

aka: Arkansas Society of the Daughters of the American Revolution (ARDAR)

The Arkansas Society of the Daughters of the American Revolution (ARDAR) is a member of the National Society of the Daughters of the American Revolution (NSDAR), which has 2,975 chapters in the United States and twenty-two international chapters. The NSDAR was founded on October 11, 1890, by Eugenia Washington, a grandniece of George Washington, along with Mary Desha, Mary Lockwood, and Ellen Hardin Walworth. In December 1893, the first Arkansas chapter of the DAR was founded in Little Rock (Pulaski County). Georgiana Washington Smith, another grandniece of Washington’s, was one of its earliest members. The first ARDAR State Conference was in February 1909 at the Marion Hotel in Little Rock (Pulaski County). ARDAR members have made lasting contributions to the … 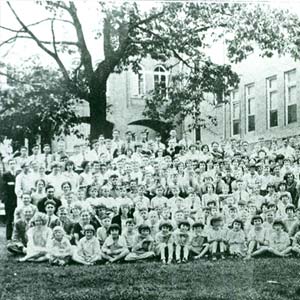 Joseph Dewitt “Sonny” Deckelman was a musician, songwriter, and record label owner active in the Memphis, Tennessee, and northeastern Arkansas rockabilly scene in the late 1950s and 1960s. While his artistic output was modest, his recordings were well received and have maintained a small but enthusiastic following. He is a member of the Rockabilly Hall of Fame. Sonny Deckelman was born in Harrisburg (Poinsett County) on September 1, 1933. He was the son of Joe V. Deckelman and Nell Ellzey Deckelman, both natives of Arkansas. His father was a farmer and mechanic, and his mother was a housewife. Deckelman came from a poor family; the census of 1940 shows his father earning no income. He was the youngest of four …

Members of many tribes displaced from homelands east of the Mississippi River temporarily resided in Arkansas up until the early nineteenth century. Among these were the Delaware, who had settlements in Arkansas until around the late 1820s. The Delaware (known also as the Lenape) speak Eastern Algonquian and live today in southern Ontario, western New York, Wisconsin, Kansas, and Oklahoma. Late sixteenth- and early seventeenth-century European explorers met their ancestors living in and around the Delaware River valley in contiguous parts of the modern states of Delaware, New Jersey, Pennsylvania, and New York. In their Northeastern homelands, the Delaware maintained an agricultural economy supplemented by hunting, fishing, and seasonally collecting nuts and other edible plant foods. They lived in multifamily …

Even for the historically one-party Democratic South, the Democratic Party’s control of Arkansas politics was solid—until the end of the twentieth century. Indeed, from the end of Reconstruction, Republican presidential candidates were denied Electoral College votes every four years until Richard Nixon’s 1972 victory. The Democratic Party’s dominance of state and local elections (outside northwestern Arkansas, which had housed Republicans since the Civil War era) was just as impressive. Still, while Democrats long fended off any sustained Republican development, recent trends–especially the historic results in the 2010, 2012, and 2014 election cycles–indicate that the change that has come to other Southern states with the rise of a competitive Republican Party has taken root in Arkansas. Before statehood, Arkansas politics was …

The Diamond State Chorus is the performance group of the Greater Little Rock Chapter of the Society for the Preservation and Encouragement of Barber Shop Quartet Singing in America, Inc. (SPEBSQSA). The international men’s singing group, also known as the Barbershop Harmony Society, has more than 34,000 members. It was founded on April 11, 1938, in Tulsa, Oklahoma. The local chapter is a grandchild of the Memphis, Tennessee, chapter. In 1952, seven barbershoppers from Memphis went to Stuttgart (Arkansas County) to start a chapter. The subsequent Grand Prairie Chorus attracted the attention of a quartet from Little Rock (Pulaski County)—The Four Specs—which made the 120-mile round trip to Stuttgart for a couple of years before deciding to form a chapter …

Arkansas-based Dierks Forests, Inc.—which amassed holdings of 1.75 million acres of timberland—was one of the largest family-owned landholding entities in the United States until its sale to Weyerhaeuser Company in 1969. Hot Springs Village (Garland and Saline counties) was created in 1970 on landholdings from the Dierks company. After arriving in the United States, German immigrant Peter Henry Dierks (1824–1908) became a successful farmer and businessman in eastern Iowa, just north of Clinton. He and his wife, Margaretha Tauk Dierks, were the parents of Hans (1850–1929), John (1852–1924), Henry (1860–1895), Herman (1863–1946), and Peter (1867–1906), as well as three daughters. In 1880, Hans Dierks joined his brother John and another partner to develop a successful retail lumber business in seven …

Before public institutions were established in Arkansas, those who were born with disabilities or who were later disabled by disease, accident, age, or war were cared for by their families and other co-residents of their households. The first public facilities to address the needs of blind and deaf children, people with intellectual disabilities, and veterans emerged in Arkansas in the 1800s. During the twentieth century, additional public and private services for the disabled were established and laws were enacted to ensure their rights. Over the course of Arkansas’s history, the disabled have been cared for in their homes out of sight of others, then seen as persons to be sheltered by the state and charitable organizations, and, more recently, enabled … During the height of the great string band era of the 1920s, one of the largest and most popular string bands in Arkansas was Dr. Smith’s Champion Hoss Hair Pullers. Originally founded to promote tourism in the area of Izard County, the band went on to achieve a modicum of regional success before succumbing to the Depression. Dr. Smith’s Champion Hoss Hair Pullers was founded by Dr. Henry Harlin Smith, a surgeon for the Missouri Pacific Railroad who lived in the Calico Rock (Izard County) area. On his travels with the railway, he found that he was often working to dispel the backward image that many people outside of Arkansas had of the region. Smith thought that if more people …

The Duggars are an Arkansas family who became famous on the TLC network show 19 Kids and Counting. The family is known for its strict adherence to the Baptist faith and conservative values, which include restrictions against any birth control methods. However, the Duggars have been criticized by those who believe that such large families are not healthy for children and those who oppose their anti-contraceptive activism. On May 22, 2015, TLC announced that they were pulling all episodes of 19 Kids and Counting after Josh Duggar, the eldest child of Jim Bob and Michelle Duggar, admitted publicly that he had engaged in acts of child molestation as a teenager; the show was officially canceled later that year. However, certain …