In the quickly industrializing world of the late nineteenth century, so-called “friendly societies” or fraternal orders organized to provide life insurance to average workers, which helped to remedy the danger of poverty that other alternatives presented. One of these societies, the Ancient Order of United Workmen (AOUW), developed quickly in the United States in the late nineteenth century and soon established itself firmly as an Arkansas institution.

In 1868, the Ancient Order of United Workmen was founded in Meadeville, Pennsylvania, by John J. Upchurch (a former Mason). Each member paid one dollar into the insurance fund to cover policies of about $500. Following the same model, AOUW lodges were formed across the United States, organized democratically by members, which allowed the local lodges to hold the bulk of AOUW’s internal power. The Supreme Lodge in Meadeville was established in 1871 to act largely in an advisory and organizational capacity. The local lodges elected members, with the hope that the insurers and the insured were one in the same in an attempt to curb the rampant corporate corruption largely associated with insurance agencies.

With the AOUW, benefits were given to every member without discrimination toward “age, occupation, residence or physical condition.” With such a blanket attitude toward its policy holders, the AOUW soon outpaced privatized life insurance companies, largely due to their incredibly low operating costs, with less than one dollar for every $1,000 going toward management. By 1903, the AOUW had a registered 435,015 members with a bank account of $745,928,000.

Following the path of other fraternal orders, the AOUW supported institutions for the improvement of members and their families. For example, the Arkansas State Lodge made loans to schools and churches which, by 1922, totaled about $40,000. The lodges often served a social function, in that members were offered entertainment along with orations designed for “inspiration to higher ideals.” Of course, as a life insurance group, the AOUW paid out benefits only after the death of the policy holder, provided the death was not from suicide. And there were certain requirements, such as keeping up with payments and meeting certain moral specifications (such as—after 1898—not selling alcohol).

By 1922, there were 150 lodges in Arkansas. The success of the order allowed for the lofty addition of the AOUW building in Little Rock (Pulaski County), designed by George Richard Mann and Eugene Stern of Mann and Stern and completed in 1918. The Arkansas State Lodge was formed by John R. Frazer and H. L. Cross, past president of the Arkansas Press Association and founder of the Benton County Sun. He published the AOUW Guide and was elected Grand Recorder (one of the highest positions) for the Arkansas Lodge, in which capacity he served for thirty years.

The AOUW opened the doorway for safeguarding the families of workers in Arkansas against the threat of poverty. In 1930, however, the Arkansas AOUW began to liquidate itself out to the National Standard Life Insurance Company. By the 1950s, the society’s fortunes fell tremendously after the passage of a series of national laws requiring concise and consistent fiscal reporting, which largely favored corporate life insurance agencies. 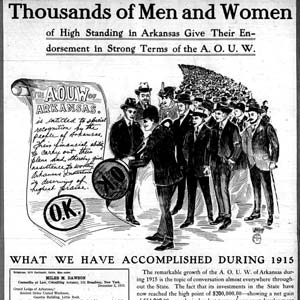