The thirty-eighth annual national reunion of the United Confederate Veterans (UCV), held on May 8–11, 1928, marked the second time that Little Rock (Pulaski County) served as the event’s host city, seventeen years after the much-celebrated 1911 reunion. Governor John Ellis Martineau’s personal invitation, along with a $30,000 legislative appropriation to provide free entertainment for all veterans, helped Little Rock beat out the cities of Atlanta, Georgia, and Lexington, Kentucky, for the honor.

The Sons of Confederate Veterans (SCV) oversaw all planning. Edmund R. Wiles, commander of the Trans-Mississippi Division of the SCV, served as general chairman of the reunion committee and used the War Memorial Building (now the Old State House) as committee headquarters. In November 1927, Wiles dispelled rumors that floods from the previous spring might force cancellation or relocation. As evidence of the city’s readiness, Wiles noted that all thirty-one committees were fully organized and that planning was underway. Although Little Rock served as the official host city, Arkansas state officials and individual cities used the occasion to emphasize tourist attractions throughout the state. In particular, Hot Springs (Garland County) advertised extensively to attract reunion tourists.

Officially, 1,098 veterans registered for reunion credentials, but attendance estimates range as high as 3,000. The Marion Hotel served as reunion headquarters and sheltered many veterans, while the recently opened Lafayette Hotel served as the headquarters for the SCV. An unnamed seventy-eight-year-old veteran was reported to be the youngest in attendance. T. M. Mayo of Texas, the oldest veteran present at 107 years, attended with his eighty-two-year-old son (also a Confederate veteran).

Bedecked in roses and other flowers, the “City of Roses” lived up to its nickname. Fair Park (now known as War Memorial Park)—rechristened “Camp Foster” for the reunion in honor of UCV national commander James C. Foster of Houston, Texas—served as the event’s 236-acre Great Camp and played host to thousands of veterans and their families. Ideal weather prevailed throughout the event. Social events included luncheons, dinners, garden parties, concerts, dances, receptions, and drives around the city. Veterans received free public transportation on streetcars, while railroads arranged for special side trips to Hot Springs, the oil fields of southern Arkansas, and other points of interest. The dining hall served 6,000 people three meals per day (free of charge to veterans) and provided each veteran with a box lunch for their return trip home.

Festivities opened on Tuesday, May 8, at the Fair Park Auditorium. First-day festivities included a performance of the song “Arkansas” by the Margaret Rose Chapter of the Children of the Confederacy choir, followed by a U.S. Marine Corps band concert and speeches by mayors Moyer and Lawhon and Sen. Robinson. Brough presented the state’s welcome message for Gov. Parnell. That afternoon, UCV poet laureate Virginia Frazer Boyle read her poem “Stone Mountain” at the Marion Hotel auditorium.

On Wednesday, May 9, J. W. Hollis, commander of the UCV Arkansas Division, presided over the day’s ceremonies. Mayors Moyer and Lawhon made official statements of welcome for their cities. Commander Foster expressed gratitude on behalf of all Confederate veterans, and Boyle read her poem “The Making of the Stars and Bars.” The U.S. Marine Corps band played at this ceremony, as well as at the headquarters hotel every evening, at the balls, at special open-air concerts, and in the closing parade.

The Thursday, May 10, session involved debate over a proposed Blue-Gray reunion to be paid for by the U.S. government. Attendees also expressed support for a memorial carving on Stone Mountain, Georgia, as well as the proposed creation of a “Southland Institute of Learning” to memorialize Confederate women and a national military park at Appomattox Courthouse, Virginia. At noon on Thursday, the Confederated Southern Memorial Association and the SCV conducted a joint memorial service, at which Boyle read her poem “In Memoriam” and Robinson made a special tribute. Two boulders placed on the grounds of the Old State House commemorated generals Thomas James Churchill of Arkansas and William Read Scurry of Texas.

The Thursday afternoon session included the election of a commander-in-chief for 1929–30. Former congressman Albert Taylor Goodwyn of Elmore, Alabama—who served initially as a private with the South Carolina College Cadets during the attack on Fort Sumter and later as a captain of sharpshooters with Company K of the Fifty-eighth Alabama Infantry—defeated R. A. Snead of Oklahoma City, Oklahoma, by a vote of 707 to 390. Afterward, Goodwyn spoke of the need for camaraderie and accord among Confederate veterans, but also referred illogically to the supposed obligations of the U.S. government to perpetuate the principles of the Confederacy (including the supposed need for “racial identity” within a “white republic,” as well as the idea that modern biology somehow affirmed the need for adherence to “the code of the white man”). During this session, Charlotte, North Carolina, prevailed over Atlanta, Georgia, as the site for the 1929 reunion.

Other notable attendees included ninety-nine-year-old James Wade Sikes, who served as a second lieutenant in Company D of the Second Arkansas Mounted Rifles. Sikes fought at Elkhorn Tavern and lost his left arm at Atlanta in 1864. Sikes went on to celebrate his centennial on October 2, 1928, and died on January 27, 1929. Eighty-seven-year-old W. L. Carter, a former private with the Twelfth Arkansas Infantry, attended with his wife of nearly sixty-three years. Ninety-year-old W. W. Hunt danced late into the evenings at the nightly balls. One accident marred the occasion—eighty-three-year-old UCV general Zachariah Wardlaw of Utica, Mississippi, fell down the marble stairs of the Marion Hotel and died of his injuries within two hours.

A grand parade closed the reunion, with a final performance by the U.S. Marine Corps band. The route started at Park Hill in North Little Rock and ended downtown on Main Street, with a large audience along the roadside and a reviewing stand on the capitol grounds. Some 1,000 vehicles carried 6,000 passengers in a procession that stretched five miles and took an hour to pass any point on the route. The retiring and incoming national commanders rode together in a car at the front, followed by carloads of dignitaries, eighteen civic and fraternal bands, and numerous floats. Most veterans rode in open-top automobiles or in the back of flatbed trucks, while members of Forrest’s Cavalry rode on horseback and others marched along on foot.

The 1928 reunion earned wide acclaim as a successful endeavor. Little Rock next played host to the national UCV reunion in 1949. 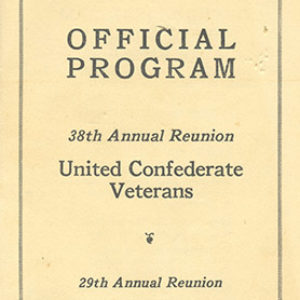