Charles Hillman Brough was an educator, a promoter, and the state’s twenty-fifth governor. Consistently rated by some historians as among the state’s best governors, he exemplified southern progressivism in Arkansas. However, he also led the state’s official response to the Elaine Massacre, the deadliest mass-casualty instance of racial violence in the state.

Charles Brough (whose much-mispronounced name rhymes with “rough”) was born July 9, 1876, in Clinton, Mississippi. His father, Milton Brough, was a captain in the Fifteenth Pennsylvania Volunteer Cavalry in the Civil War. After the war, he engaged in mining and banking, first in the South and then in Utah. While in Mississippi, he met and married Flora Thompson, a schoolteacher, who came from Maine and was living in Utah when his son was born. Brough (known as Hillman in family circles) spent his first six years with his parents in Utah, but following the death of his mother in 1885, he returned to Clinton, where he lived with his uncle, Dr. Walter Hillman, whose wife, Adelia, was Flora Brough’s sister. Hillman was president of the Central Female Institute, a Baptist school in Clinton, and saw to Brough’s education.

At fourteen, Brough was admitted to Mississippi College, a Baptist men’s school in Clinton, where he graduated as co-valedictorian in 1894. After living a year with his father in Utah, he enrolled in the graduate program at Johns Hopkins University, where one of his professors was Herbert Baxter Adams, author of a history of Utah and a proponent of dispassionate and analytical history. Brough’s dissertation, Irrigation in Utah, was published by Johns Hopkins University Press in 1898 and received favorable notices.

Armed with his doctorate, Brough returned to Mississippi and taught three years at Mississippi College. Besides covering U.S. and European history, economics, ethics, and German, he recruited students and published scholarly articles on taxation in Mississippi and the Clinton Race Riot of 1875. In 1901, he resigned from the college to enter law school at the University of Mississippi, where he completed the two-year course requirements in a year. After unsuccessfully seeking the position as head of the Mississippi Department of Archives and History, he left the state to teach economics at the University of Arkansas (UA) in Fayetteville (Washington County). His research and teaching expanded to sociology and current issues in transportation, tariff law, and economics, and his publications included articles on Arkansas history. He was admitted to the bar in 1904 but apparently never practiced. In 1912, he participated in organizing the Southern Sociological Congress. He was president of the Arkansas State Teachers Association from 1913 to 1914. Much quoted was his claim that teachers held the wand of the modern Orpheus (making rocks sing).

Brough spoke often to patriotic groups and at commencement ceremonies and political gatherings. An active Baptist, he occasionally filled pulpits. On June 17, 1908, he married Anne Wade Roark of Franklin, Kentucky. They had no children.

His first political foray came in 1913, when the departure of Governor Joseph T. Robinson to the U.S. Senate necessitated a special election. Brough withdrew before the election, but in 1915, he resigned from the university and began a new gubernatorial campaign. Brough had kept copious records on all his students (and was reputed to be an easy teacher); students, together with the many civic club members who had heard him speak, constituted the core of his support.

In the Democratic primary, his two principal opponents were Secretary of State Earle W. Hodges and Lewis Cass “Shotgun” Smith. Hodges thought he could use race issues to gain votes and promised whites that, if he were elected, white voters could decide where African Americans might live. Smith, who modeled himself on Governor Jeff Davis, only wanted “a cake of cornbread and a pint of potlicker.” Hodges claimed Brough supported race mixing and, because he had written a book concerning Utah, was a Mormon. Brough won the primary and then swept to victory in the general election. When he ran for a second term two years later, the Republicans failed to field a candidate and endorsed him over socialist Clay Fulks.

Historians have long been divided about who was the more progressive—Governor George W. Donaghey (1909–1913) or Brough. The long list of progressive legislation Brough saw enacted included more money for education, a compulsory school attendance law, vocational education, and the creation of the state commission of charities and corrections. Brough had been active in the Southern Sociological Congress (and even served as its president), and few governors were as well informed on juvenile delinquency, public health, and other social issues. Brough supported strengthening the state’s prohibition law, and he was photographed arm in arm with suffragettes. Arkansas ranked well ahead of most Southern states in women’s rights, and in 1917, at Brough’s urging, the legislature permitted women to vote in party primaries. Immediately, the state’s congressional delegation fell in line behind a national constitutional amendment. Finally, Brough pushed for a new constitution in 1918 designed to take Arkansas into the twentieth century. Voted on during the influenza pandemic, it failed at the polls.

Yet in all this, he signed off on serious restrictions. Many useful state laws lacked funding. The state’s highway program consisted of creating more than 500 road districts with no state coordination. The much-heralded compulsory school attendance law was optional for the counties, so it did not operate in the Delta. Finally, Brough—and most Southern progressives—believed that African Americans were an inferior race. Brough’s views became apparent in 1919 when trouble erupted in Phillips County after black sharecroppers organized a union and hired a respected Little Rock (Pulaski County) law firm to represent them. Brough sent in the National Guard and visited the area immediately following the Elaine Massacre, in which an untold number of African Americans lost their lives as tales of a supposed “insurrection” spread. However, the governor’s informants were white, and his decisions reflected their presumptions. The commission he appointed was not charged with investigating the riot but with trying to prevent future such occurrences.

Brough embraced the internationalized progressivism of World War I, making 600 patriotic speeches. His support for the war extended to include Woodrow Wilson’s League of Nations—a rarity among governors of the time period. Isolationism was strong in some areas, and most Southern governors were basically ignorant of international affairs.

When his gubernatorial term was finished, he considered running for the U.S. Senate. Instead, he went to work as a lecturer for the Redpath Chautauqua circuit and as a publicity agent for the Arkansas Advancement Association. Brough had a national reputation as a progressive, but his excessive boosterism invited mockery in American intellectual circles. Brough obtained his objective in having Arkansas adopt an official nickname, but the term “Wonder State” increasingly invited head-shaking wonder. He also used his famous “wall around Arkansas” metaphor, in which he argued that Arkansas was self-sufficient in all things. The wall, too, could be read in other terms. He tangled with journalist H. L. Mencken, who referred to the “miasmatic jungles” of Arkansas with lynching and prohibitionist statistics, while Brough bragged on Sunday School attendance. Ironically, he redeemed himself to some extent in 1928. While president of Central College for Women in Conway (Faulkner County), a site now occupied by Central Baptist College, he opposed attempts to keep Baptists from voting for the Democratic presidential candidate, New York Catholic Al Smith. Leaders in the Baptist state convention attacked the former governor, and relations only worsened when Brough expressed his public opposition to the initiated act that sought to ban all references in the schools to Charles Darwin or evolution. By March 1929, Brough moved on to become publicity agent for the University of Arkansas, holding that job until 1932.

After Senator Thaddeus H. Caraway died in 1931, Brough joined the long list of contenders for his seat. Caraway’s widow, Hattie, with the help of Louisiana Senator Huey Long, defeated all six; Brough finished fourth. For the next two years, he worked for an insurance company, and from September 1932 to June 1934, he had a presidential appointment to chair a commission settling a border dispute between West Virginia and Washington DC. Less than a month after the final report was delivered, he suffered a heart attack on December 26, 1935, and died in Washington DC. He is buried in Little Rock’s Roselawn Memorial Park.

Although he was long praised by historians for the many reforms he undertook, Brough’s legacy has become increasingly contentious, especially in the wake of the Black Lives Matter movement, which drew attention not only to present-day police violence but also to a public memorial landscape honoring proponents of white supremacy. On April 28, 2021, a committee composed of UA students, faculty, staff, and alumni recommended the removal of Brough’s name from the campus dining hall. Three months later, the University of Arkansas System Board of Trustees approved without any opposition a resolution to do exactly that.

De Boer, Marvin E., ed., Dreams of Power and the Power of Dreams: The Inaugural Addresses of the Governors of Arkansas. Fayetteville: University of Arkansas Press, 1988. 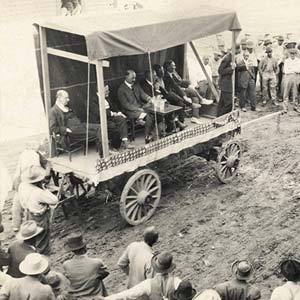