In late 1850, Bishop Andrew Byrne went to Ireland in search of an order of sisters to promote Catholic education in Arkansas. Upon contacting the Sisters of Mercy, Byrne was granted twelve members of the order. The women arrived in Little Rock on February 5, 1851, a date now known as “Founders Day.”

The sisters lived in Byrne’s house on 2nd Street and then in a meeting house on Markham Street. Their “official” convent at 6th and Louisiana streets was blessed on November 1, 1851. The Louisiana Street convent, which originally taught thirty-five Catholic and Protestant students of both sexes, remained the sisters’ home for more than fifty years. The boarding school associated with the Sisters of Mercy most likely originated in 1852, when the daughters of some of Bishop Byrne’s New Orleans, Louisiana, friends were sent to the school.

During the Civil War, St. Mary’s Convent housed students, children displaced by the war, and Confederate and Union soldiers. The Sisters of Mercy witnessed the Union capture of Little Rock in 1863. Toward the war’s end, Federal troops provided food and supplies to St. Mary’s.

The Reconstruction era was a time of rebuilding for the Sisters of Mercy. By 1875, St. Mary’s offered an education to girls and boys on the grammar and high school levels. The Sisters of Mercy had wanted to move their convent and school to an alternate location since 1883; the increased overcrowding and noise of the Little Rock business district had grown to surround St. Mary’s. With help from Bishop John B. Morris, the Sisters of Mercy relocated to ten acres atop a ridge in rural Pulaski Heights. Construction on a five-story, Gothic-style main building began in 1907. The new location was dedicated on June 11, 1908. It housed the convent, dormitories for more than 100 students, and classrooms for grammar and high school students. With the relocation, the school was renamed Mount St. Mary Academy and became an all-female school.

The Depression years at Mount St. Mary were defined by the struggle to maintain both enrollment and school facilities. Some families bartered goods and services to ensure that their daughters would remain enrolled at the school. A strong Parent Teacher Association organized the efforts of parents in repairing facilities and building additions for the school.

The Second Vatican Council in 1965 was followed by a decline in the number of women entering the Sisters of Mercy at the Mount. Because of the decrease, the school had to downsize. By 1970, boarding students were no longer accepted. In 1975, Mount St. Mary decided to stop enrolling grade school students.

The late 1970s and early 1980s were times of both construction and destruction for Mount St. Mary. The Marian Hall Annex was dedicated in 1977 to serve the school’s 750 students. In 1982, the Sisters of Mercy had moved to a new convent, and the next year, the 1908 main building that once housed them was demolished. Despite preservation efforts by the community, the structure was determined too expensive to maintain. In 2000, the Karen Flake Math and Science Building was added to the campus. Additional major renovations to other buildings was completed in 2009. In 2017, the convent was officially closed and deeded over to the school.

Mount St. Mary celebrated its 150th anniversary during Founder’s Week in 2001. Bishop Andrew McDonald celebrated a mass with students, faculty, and guests in the gymnasium. One guest, Governor Mike Huckabee, declared February 5 to be “Sisters of Mercy Day” in Arkansas. 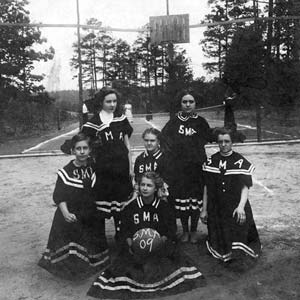