Pulaski Heights, an affluent neighborhood in Little Rock (Pulaski County), was originally a suburban development located on the outskirts of the state’s capital city. Work began on the Pulaski Heights development in the late nineteenth century, and it incorporated as its own town in 1905. The Pulaski Heights development marked the beginning of Little Rock’s westward expansion, a trend that greatly accelerated in the late twentieth and early twenty-first centuries. Like many suburban developments of the late nineteenth and early twentieth centuries, it was racially exclusive, enforcing an all-white residence primarily by means of restrictive covenants.

Pulaski Heights was the project of Michigan industrialist Henry Franklin (H. F.) Auten, who settled in Little Rock by 1890 and later organized the Pulaski Heights Land Company, which was capitalized at $500,000. He purchased an initial 800 acres in March 1891, following this with another 500 acres. The first ten blocks of Pulaski Heights were platted the following year. To make his development more attractive, Auten obtained an extension of Little Rock’s streetcar franchise into Pulaski Heights, with the area receiving streetcar service in 1903. In advertising the area, Auten resorted to much of the health-conscious language of the day, emphasizing the development’s location in the foothills of the Ouachita Mountains west of the city: “Why live in the slums of the city or in the miasma of the flats when you can own a home on the Heights for half the cost?” Although the development was slow to take off, streetcar service made it much more attractive to potential buyers, and, by the time Pulaski Heights incorporated on August 1, 1905, its population was estimated at between 300 and 400. New additions followed in the coming years, and the town’s population stood at 683 by 1910.

Incorporation allowed for the provision of public improvements, such as sidewalks and street paving, and this in turn attracted more development. St. Mark’s Episcopal Church was built circa 1905 but no longer exists. Mount St. Mary Academy relocated from downtown Little Rock to Pulaski Heights in 1908, and St. John’s Seminary/Little Rock College followed eight years later. In 1913, what is now Pulaski Heights Middle School was established. Methodist and Presbyterian churches were organized in 1912 and 1913, respectively. Numerous businesses and a newspaper were also established.

As with many turn-of-the-century suburbs, developers sought to exclude “undesirable” people, especially African Americans. Advertisements—such as one that appeared in the May 1, 1904, Arkansas Gazette—noted that “negro cabins and shanties will be unknown” in Pulaski Heights. In addition, restrictive covenants attached to each lot prohibited the sale to anyone “other than those wholly of the white race,” although black domestic servants were permitted to reside in the homes of their employers. Although racial covenants were ruled unconstitutional by the U.S. Supreme Court in 1948, Pulaski Heights remains in the twenty-first century one of the least racially diverse neighborhoods in Little Rock.

In addition to creating a racially exclusive zone, post-incorporation Pulaski Heights leaders also sought to regulate the morals of the community through ordinances that prohibited “indecent” dress, “lewd” behavior, and loitering.

On January 4, 1916, Little Rock voters approved the annexation of Pulaski Heights by a ten-to-one margin, and the suburb became the city’s ninth ward. Most voters in Pulaski Heights approved consolidation, in large part due to the promise of Little Rock leaders to establish a fire station in their neighborhood. Numerous additions to Pulaski Heights continued to be built through the 1920s and 1930s.

One of the most well-known events in the history of Pulaski Heights occurred on March 31, 1960, when a B-47 bomber from Little Rock Air Force Base exploded over the neighborhood. Three of the four crew members were killed, while two civilians on the ground were killed, and numerous houses were damaged, by falling debris. The nose cone of the aircraft fell in Allsopp Park, while the body of the pilot landed at Pulaski Heights Athletic Field.

Pulaski Heights remains one of Little Rock’s most exclusive neighborhoods and is a well-known destination because of its many restaurants, music venues, and boutique shops, many of which are located along Kavanaugh Avenue (named for its builder, William Marmaduke Kavanaugh), as well as Allsopp Park, the Country Club of Little Rock, and the St. John Catholic Center (the headquarters of the Diocese of Little Rock). In addition, the neighborhood is also home to the Ozark Point Treatment Plant of Central Arkansas Water, the present facility of which was completed in 1886 and remodeled several times. Ozark Point receives water from Lake Winona in Saline County and distributes it by means of gravity through large parts of Little Rock and North Little Rock (Pulaski County). The most common residential architectural styles in the neighborhood are the Colonial Revival and bungalow styles, and Charles Thompson and George R. Mann were among the notable architects who designed houses in Pulaski Heights. Many of the houses located in the neighborhood are listed on the National Register of Historic Places. 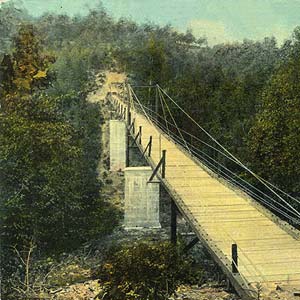