Midland Holm was a 5,000-acre plantation situated in the Oil Trough Bottoms on the White River in Independence County. It was established by Virgil Young (V. Y.) Cook. Described by his contemporaries as a young man “with keen foresight and ability, coupled with indomitable energy,” Cook, at age eighteen, began life in Arkansas as a merchant in Grand Glaise (Jackson County) in 1866. Showing an early interest in the Oil Trough Bottoms, he bought his first eighty acres there in 1873 for $500. He would eventually own a plantation of 5,000 acres of the fertile bottomland, making him the largest landowner in the county.

After being appointed receiving agent for the Cairo and Fulton Railroad, Cook moved with the railroad in 1874 to establish the town of Olyphant (Jackson County), where he operated a mercantile store for ten years and continued to acquire land in the Oil Trough Bottoms. In 1883, he purchased a house near Elmo (Independence County) that was built in 1875 by William R. Cook (no known relation). The following year, the Cook family moved to the house that he named Midland Holm, where they would reside until 1907, when they moved to Batesville (Independence County).

By 1885, Cook had completed a steam cotton gin, moved his mercantile business from Olyphant, and created a landing on the White River to ship his cotton to market by steamboat. He built a school beside Aydelotte Chapel, a Methodist church, naming it Aydelotte School in honor of Alfred P. Aydelotte, who first donated the land for a church and school.

Cook did no farming himself but contracted his land to tenants for $4.50 to $10 an acre. He provided housing and outbuildings for their use, and they provided their teams and equipment. It was often a problem for landowners to keep good tenants, but at least two of Cook’s tenants “cropped” his land for fifty years, and others stayed for twenty years or more.

Lack of a reliable means of communication for the plantation led Cook and his brother Barnett to incorporate the Oil Trough and Batesville Telephone Company. Completed at a cost of $3,000, the central office opened at Midland Holm on May 3, 1888. The line ran from Midland Holm to Oil Trough and then across White River to the Independence County towns of Akron, Newark, Sulphur Rock, Moorefield, and Batesville.

Cook and Mildred Ophelia Lamb were married at Jacksonport (Jackson County) in 1871. At the time they moved to Midland Holm, their family consisted of four children—Neva Pearl, Virgil Whitfield, May, and Jennie—as well as Cook’s mother, Pernecia Dodds Cook, and his brother Barnett. Varina Ann, the youngest of the Cook children, was born on the plantation.

Neva, the Cooks’ oldest daughter, married Paul Butler at Midland Holm in 1895. Approximately thirty guests from Newport (Jackson County) arrived in their buggies, and an additional forty people from Batesville arrived on the steamer J. A. Woodson. The buggies from Newport met the steamboat at Cook’s landing, about a mile from Midland Holm, and took the Batesville guests to the house, returning them to the landing after the wedding.

Cook was a teenager when he served as staff courier in General Nathan B. Forrest’s Cavalry during the Civil War, and the military continued to play an important role throughout his life. He was a passionate advocate for Confederate veterans and their families and, while living at Midland Holm, wrote regularly for the Confederate Veteran Magazine and carried on voluminous correspondence with fellow veterans and others interested in their welfare. He contributed to the establishment of monuments to honor Confederate veterans, commissioned paintings by Swiss artist Frederick Ruple to memorialize important Civil War battles in which Forrest was involved, and helped purchase Beauvoir, home of Jefferson Davis at Biloxi, Mississippi, for veterans’ use.

The year 1916 was a difficult one for Cook. His wife, Ophelia, died in July. The wood-frame building housing his general store burned in February due to a defective flue. Arson was suspected as the cause of the fire that destroyed his gin in August. He had very little insurance on either building, and the cost of replacing the gin was estimated at $10,000. He did not replace the buildings.

Cook died at his home in Batesville in 1922. His descendants continued to own the house at Midland Holm until 1973. Owned by Wayne Henson in the twenty-first century, it has been renovated several times. The home was damaged by a tornado in 2011 but remained an attractive private residence more than a decade later.

Wyeth, John Allan, M.D., LL.D. “My Residence in Arkansas: Being an Account of the Adventures and Experiences of John Allan Wyeth During Reconstruction Days—Three Busy Years of Varied and Profitable Industry.” Monthly Bulletin of the Arkansas Medical Society 2 (December 15, 1905).

Agriculture
Post-Reconstruction through the Gilded Age, 1875 through 1900 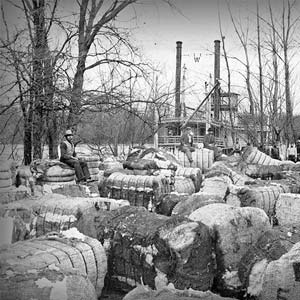 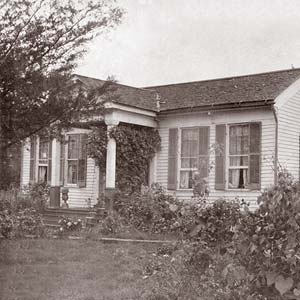 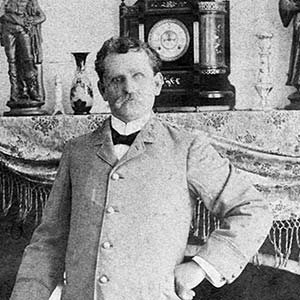