Madison, named for President James Madison, is located on the western bank of the St. Francis River at the foot of Crowley’s Ridge in eastern Arkansas. Reconstructing the history of Madison is difficult because multiple floods and fires destroyed local records of this once bustling river town. Madison, which was mostly an agricultural community by the twentieth century, was home to the first African-American millionaire in Arkansas, Scott Bond.

Louisiana Purchase through Early Statehood
In the early 1800s, Madison was a busy shipping point for steamboats and ferries. It flourished because of its location on the St. Francis River, which at the time was large enough to accommodate riverboats. Some of the larger steamboats had ballrooms and orchestras, and when the boats were anchored overnight, people came from miles around to attend balls on board. The St. Francis County seat was moved from Franklin to Madison in 1841, where it remained until about 1855, when the county seat was moved to Mount Vernon, but Madison regained the seat the next year after the Mount Vernon courthouse and records burned.

Madison had a series of newspapers over the years including the Madison Crescent in 1858 and, a few years later, the Madison Journal and the Madison Pioneer. By 1860, Madison was listed as the post office for Franks, Liberty, and Union townships. Madison Township became more populated as the railroad was built.

Civil War through the Gilded Age
By 1861, the Memphis to Little Rock Railroad was laid to the St. Francis River in the area that is now Madison, but there was no bridge spanning the river. Construction on the railroad halted due to the Civil War, creating a gap between Madison and DeValls Bluff (Prairie County) for several years. There was a small skirmish at Madison on February 12, 1865, resulting in a Union victory. The railroad bridge was finally completed on April 17, 1869. In 1867, Madison was flooded for three weeks when the St. Francis River overflowed its banks after a series of storms. On October 29, 1867, a fire destroyed three stores in Madison. Despite these events, Madison continued to grow as a shipping point. During a period of martial law during Reconstruction, in January 1869, a faction of the Arkansas militia raided stores and houses at Madison for supplies, forcing locals to hide in the woods for protection. The steamer Linton was also raided by this militia while docked near Madison.

In 1869, Madison Free Press was the local newspaper for the township until it moved to Forrest City (St. Francis County) the next year. By 1870, Madison served as the post office for seven townships: Franks, Griggs, Johnson, Liberty, St. Francis, Texas, and Union. After the completion of the bridge spanning the St. Francis River, the railroad (which eventually was the Chicago, Rock Island, and Pacific Railroad—usually referred to as the Rock Island Railroad) was completed from Madison to Little Rock (Pulaski County) in 1871. With the development of this railroad, Forrest City grew and competed with Madison for industry and population.

In 1874, Forrest City replaced Madison as the St. Francis County seat, creating animosity between residents of the two towns. Because Madison residents were unwilling to allow the relocation, the safe and records were moved in the middle of the night to the Forrest City Courthouse by some Forrest City residents. After this relocation, Madison dwindled in popularity, and businesses suffered.

Following the Civil War, the Arkansas Delta attracted migrants from the Midwest and other regions outside the South. The city was able to reestablish itself when lumber companies such as Griffith and DeMange took an interest in the area. By the 1880 census, there were 310 recorded households in Madison, making it the largest community in the area. The town incorporated in 1914.

Resident Scott Winfield Bond, who had been born into slavery, was a prominent area farmer, landowner, and businessman of the late nineteenth and early twentieth centuries. He owned several Madison town lots and several businesses, including five cotton mill plants and a sawmill, and became one of the state’s wealthiest businessmen. Scott, who died in 1933, is buried in Madison.

Early Twentieth Century through the Modern Era
The St. Francis River Bridge on Highway 70, constructed by the Wisconsin Bridge and Iron Company, was part of a 1930s highway and development project. Opening on September 4, 1933, it is one of three swinging road bridges in Arkansas, featuring a central swing span. It was the main bridge for east-west traffic until Interstate 40 was built in the 1950s.

The county suffered during the Floods of 1927 and 1937. The St. Francis River was so high that it flooded the railroad tracks in some places in Madison.

In 1979, the Arkansas Delta Project, which was operating under the auspices of the Save the Children Federation—a nonprofit human services organization based in Westport, Connecticut—offered its services to Madison. Madison by this time was suffering from many of the plights of small towns in the Delta: too few jobs, limited municipal services, and little hope for improvement. The three-year, $862,000 project funded by the Arkansas-based Winthrop Rockefeller Foundation, the Rockefeller Brothers Foundation of New York, and the Save the Children Federation selected Madison as its headquarters because it was seen as an excellent vehicle for developing a model small-town human resources development program.

At this time, Madison was made up of many small farming families who owned forty- to eighty-acre cotton and soybean plots. The goal of the Arkansas Delta Project was to enhance the capability of local governments to deliver services to residents and to work with small farmers in the area of retention and effective land utilization. The project worked with local organizations, including the East Arkansas Produce Marketing Association, which was composed of several hundred farms in St. Francis and Crittenden counties. One of the initiatives of the association, in conjunction with the Arkansas Delta Project, was to influence local farmers to start vegetable production instead of cotton and soybeans. This program was implemented in the Madison area but had no lasting effect, and the community continued to decline. In the twenty-first century, Madison is made up of a collection of small businesses that support the needs of its small community.

Education
Madison was one of fifteen elementary wing schools of the Forrest City School District, created around the 1940s. While not all names of these early schools are known, the lasting neighborhood elementary school was the Madison Butler Elementary School. It was later renamed Madison Elementary. This school served students from the surrounding areas from kindergarten to fourth grade until around 1991, when it became a school for pre-K through third grade. By 2002, it served only pre-K through first grade. As of 2012, Madison Elementary is the alternative learning environment (ALE) for the Forrest City School District.

Attractions
Fossils can be found at Crow Creek, which is located on Crowley’s Ridge, west of Madison, intersecting Highway 70.

The St. Francis River Bridge was listed on the National Register of Historic Places on April 9, 1990.

The Scott Bond family plot is located in Madison on Highway 70 west. The plot includes two structures in a low, concrete border, and a memorial marker listing the names of the family members interred there. It was listed on the National Register of Historic Places on June 6, 2002.

Rudd, Dan A., and Theo Bond. From Slavery to Wealth: The Life of Scott Bond. Edited by Willard B. Gatewood. Fayetteville, AR: Phoenix International Inc., 2008. 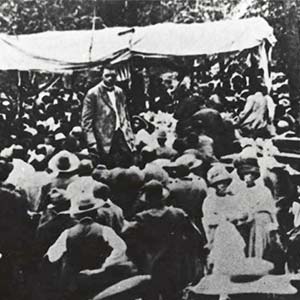