The Little Rock Nine were the nine African-American students involved in the desegregation of Little Rock Central High School. Their entrance into the school in 1957 sparked a nationwide crisis when Arkansas governor Orval Faubus, in defiance of a federal court order, called out the Arkansas National Guard to prevent the Nine from entering. President Dwight D. Eisenhower responded by federalizing the National Guard and sending in units of the U.S. Army’s 101st Airborne Division to escort the Nine into the school on September 25, 1957. The military presence remained for the duration of the school year.

On May 24, 1955, the Little Rock School Board adopted a plan for gradual integration, known as the Blossom Plan (also known as the Little Rock Phase Program). The plan called for desegregation to begin in the fall of 1957 at Central and filter down to the lower grades over the next six years. Under the plan, students would be permitted to transfer from any school where their race was in the minority, thus ensuring that the black schools would remain racially segregated, because many people believed that few, if any, white students would opt to attend predominantly black schools. Federal courts upheld the Blossom Plan in response to a lawsuit by the National Association for the Advancement of Colored People (NAACP).

On September 4, 1957, the Nine attempted to enter Central but were turned away by Arkansas National Guard troops called out by the governor. When Elizabeth Eckford arrived at the campus at the intersection of 14th and Park Streets, she was confronted by an angry mob of segregationist protestors. She attempted to enter at the front of the school but was directed back out to the street by the guardsmen. Walking alone, surrounded by the crowd, she eventually reached the south end of Park Street and sat down on a bench to wait for a city bus to take her to her mother’s workplace. Of her experience, Eckford later said, “I tried to see a friendly face somewhere in the mob—someone who maybe would help. I looked into the face of an old woman and it seemed a kind face, but when I looked at her again, she spat on me.” Others of the Nine arrived the same day and gathered at the south, or 16th Street, corner where they and an integrated group of local ministers who were there to support them were also turned away by guardsmen.

The Nine remained at home for more than two weeks, trying to keep up with their schoolwork as best they could. When the federal court ordered Gov. Faubus to stop interfering with the court’s order, Faubus removed the guardsmen from in front of the school. On September 23, the Nine entered the school for the first time. The crowd outside chanted, “Two, four, six, eight…We ain’t gonna integrate!” and chased and beat black reporters who were covering the events. The Little Rock police, fearful that they could not control the increasingly unruly mob in front of the school, removed the Nine later that morning. They once again returned home and waited for further information on when they would be able to attend school.

Calling the mob’s actions “disgraceful,” Eisenhower called out 1,200 members of the U.S. Army’s 101st Airborne Division—the “Screaming Eagles” of Fort Campbell, Kentucky—and placed the Arkansas National Guard under federal orders. On September 25, 1957, under federal troop escort, the Nine were escorted back into Central for their first full day of classes. Melba Pattillo later wrote, “After three full days inside Central, I know that integration is a much bigger word than I thought.”

After the Nine suffered repeated harassment—such as kicking, shoving, and name calling—the military assigned guards to escort them to classes. The guards, however, could not go everywhere with the students, and harassment continued in places such as the restrooms and locker rooms. After the 101st Airborne soldiers returned to Ft. Campbell in November, leaving the National Guard troops in charge, segregationist students intensified their efforts to compel the Nine to leave Central. The Little Rock Nine did not have any classes together. They were not allowed to participate in extracurricular activities at Central. Nevertheless, they returned to school every day to persist in obtaining an equal education.

Although all of the Nine endured verbal and physical harassment during their year at Central, Minnijean Brown was the only one to respond; she was first suspended and then expelled for retaliating against the daily torment by dropping her lunch tray with a bowl of chili on two white boys and, later, by referring to a white girl who hit her as “white trash.” Of her experience, she later said, “I just can’t take everything they throw at me without fighting back.” Brown moved to New York City and graduated from New Lincoln High School in 1959.

The other eight students remained at Central until the end of the school year. On May 27, 1958, Ernest Green became Central’s first black graduate. Dr. Martin Luther King Jr. attended his graduation ceremony. Green later told reporters, “It’s been an interesting year. I’ve had a course in human relations first hand.” The other eight, like their counterparts across the district, were forced to attend other schools or take correspondence classes the next year when voters opted to close all four of Little Rock’s high schools to prevent further desegregation efforts.

The women of the Little Rock Nine were named sponsors of the forthcoming USS Arkansas nuclear submarine in 2018. In 2022, as part of the sixty-fifth anniversary of the desegregation of Central High School, South Park Street was renamed Little Rock Nine Way.

(2014) I’m eleven years old. I like that the Little Rock Nine went to Central High School even though they knew it would be hard to attend to a white school and be the only African Americans there. Im reading this book called The Lions of Little Rock, and it shows so much detail about how people weren’t afraid to speak up, even though they knew there would be consequences. The Little Rock Nine inspired me to speak up if something is not right and to deal with it right away. 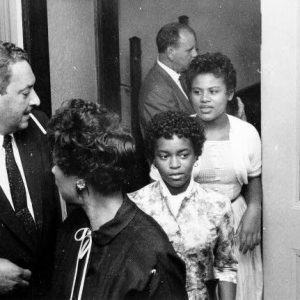