aka: Crisis at Central High
aka: Little Rock Desegregation Crisis

In its 1954 Brown v. Board of Education of Topeka, Kansas decision, the U.S. Supreme Court ruled that racial segregation in public education was a violation of the Fourteenth Amendment to the Constitution. As school districts across the South sought various ways to respond to the court’s ruling, Little Rock (Pulaski County) Central High School became a national and international symbol of resistance to desegregation.

On May 22, 1954, the Little Rock School Board issued a statement saying that it would comply with the Court’s decision, once the court outlined the method and time frame for implementation. Meanwhile, the board directed Superintendent Virgil Blossom to formulate a plan for desegregation. In May 1955, the school board adopted the Phase Program Plan of gradual desegregation that became known as the Blossom Plan, after its author.

The plan was originally conceived to begin at the elementary school level. However, as parents of elementary school students became some of the most outspoken patrons against integration, district officials decided to begin token desegregation in the fall of 1957 at Central High School, to expand to the junior high level by 1960 and, tentatively, to the elementary level by 1963. The plan also included a transfer provision that would allow students to transfer from a school where their race was in the minority. This assured that students at Horace Mann High School would remain predominantly African-American.

Later that May, the U.S Supreme Court issued its Brown II decision, directing districts to proceed with desegregation with “all deliberate speed.” The Court returned the case to federal district courts for implementation.

In February 1956, the National Association for the Advancement of Colored People (NAACP) filed suit against the Little Rock School District on behalf of thirty-three African-American students who had attempted to register in all-white schools. In the suit, Aaron v. Cooper, the U.S. Court of Appeals for the Eighth Circuit upheld the school district’s position that the Blossom Plan complied with the Supreme Court’s instructions. The federal court retained jurisdiction in the case, making compliance with the plan mandatory.

Meanwhile, across the South, resistance to desegregation grew. Nineteen U.S. senators and eighty-one congressmen, including all eight members from Arkansas, signed the “Southern Manifesto” denouncing the U.S. Supreme Court’s decision and urging Southern states to resist it. In Little Rock, the Capital Citizens’ Council—a local version of the white citizens’ councils that were emerging across Arkansas and the South—formed in 1956 to promote public resistance to desegregation. The organization purchased newspaper advertisements attacking integration and held rallies at which speakers challenged Arkansans to resist. In one of the more publicized events, Georgia Governor Marvin Griffin and former Georgia state representative and state senator Roy V. Harris, frequent speakers at white citizens’ council rallies across the South, assured listeners at a Capital Citizens’ Council fundraiser that Georgia would not allow school desegregation and called upon Arkansans to support white supremacy and defend segregation. With fall of 1957 fast approaching, both segregationists and school district officials appealed to Governor Orval Faubus to take action to preserve order. In a letter-writing campaign to the governor, segregationists predicted that violence would erupt if desegregation proceeded at Central High School. School district officials appealed to the governor to assure the public that desegregation would proceed smoothly. Faubus, in turn, asked the federal government for assistance in the event of trouble. Arthur B. Caldwell, head of the Department of Justice’s civil rights division, met with Faubus on August 28, 1957, and advised him that the federal government could not promise advance responsibility for maintaining order. Angered when the press received a report of the meeting, Faubus told reporters that the federal government was trying to force integration on an unwilling public while at the same time demanding that states handle any problems that might arise on their own.

Closely aligned with the Capital Citizens’ Council, the Mothers’ League of Central High, formed by Margaret Jackson and Nadine Aaron in August, petitioned the governor to prevent desegregation at the school. The group filed a petition on August 27, 1957, seeking a temporary injunction against integration. Pulaski Chancellor Murray Reed granted the injunction on the grounds that desegregation could lead to violence. The next day, however, Federal District Judge Ronald Davies nullified the injunction and ordered the Little Rock School Board to proceed with its desegregation plan. The conflict reached crisis proportions when Faubus appeared on television on September 2, 1957, and announced that he had called out units of the Arkansas National Guard to prevent violence at Central High School, saying, “There is evidence of disorder and threats of disorder which could have but one inevitable result—that is violence, which can lead to injury and the doing of harm to persons and property.” School district officials advised the black students who had registered at Central not to try and attend for the first day of classes on September 3. Davies ordered the school board to proceed with desegregation the next day.

On September 4, 1957, nine African-American students attempted to enter Central High School. Several of them made their way to one corner of the campus where the National Guard turned them away. One of them, fifteen-year-old Elizabeth Eckford, arrived at the north end of the campus and was directed away by National Guardsmen. She walked south down Park Street in front of the school campus, surrounded by a growing crowd of protesters who jeered and taunted her. Eckford made her way to a bus stop on the south side of the campus and was able to board a bus and get away to safety at her mother’s workplace. The next morning, people around the country and world opened their newspapers to images of the teenager besieged by an angry mob of students and adults.

The Little Rock School Board asked Davies to suspend his desegregation order temporarily, but the judge refused and ordered the school district to proceed with desegregation. The judge also instructed U.S. Attorney General Herbert Brownell Jr. to file a petition for an injunction against Faubus and two officers of the Arkansas National Guard to prevent them from obstructing the court order to desegregate. In the interim, U.S. Congressman Brooks Hays, a Democrat, arranged a meeting between Faubus and President Dwight D. Eisenhower to try and reach a solution to the crisis. They met at Eisenhower’s vacation home in Newport, Rhode Island, on September 14, but the meeting ended without an agreement.

On September 20, 1957, Judge Davies ordered Faubus and the National Guard commanders to stop interfering with the court’s desegregation order. Faubus removed the guardsmen from the school and left the state for a Southern governors’ conference in Georgia. The following Monday, September 23, 1957, Little Rock police were left to control an unruly mob that quickly grew to over 1,000 people as the nine African-American students entered the school through a side door. The crowd’s attention was diverted when some of the protestors chased and beat four African-American reporters outside the school. By lunchtime, police and school officials feared that some in the crowd might try to storm the school and removed the nine students for their safety.

These U.S. Army troops escorted the “Little Rock Nine,” as they became known, into Central High School on September 25, 1957. After weeks of turmoil and trying to keep up with their work without attending school, the students went to their classes guarded by soldiers. Faubus appeared on television saying that Little Rock was “now an occupied territory.”

By October 1, most of the enforcement duty was turned over to the National Guard troops, and the U.S. Army troops were completely removed by the end of November. On October 25, one month after they arrived with a federal troop escort, the Little Rock Nine rode to school for the first time in civilian vehicles. While conditions calmed outside the campus, inside the school, the Nine endured an endless campaign of verbal and physical harassment at the hands of some of their fellow students for the remainder of the year. More than 100 white students were suspended, and four were expelled, during the year. One of the Nine, Minnijean Brown, was expelled in February 1958 for retaliating against the abuse; she was struck by a white student and called the student “white trash” in response.

In spite of the abuse, the bomb threats, and all other disruptions to the learning environment, the only senior among the Nine, Ernest Green, became Central High’s first African-American graduate on May 27, 1958. Of his experience that year, Green said, “It’s been an interesting year…. I’ve had a course in human relations firsthand.” The 1957 Central High Crisis came to symbolize both massive resistance to social change and the federal government’s commitment to enforcing African-American civil rights.

Green’s graduation did not end the “crisis” in Little Rock, however. As the NAACP continued to press for continued desegregation through the federal courts, segregationist and moderate whites began a struggle of their own for control of local schools that would not end until the public high schools closed for the duration of the 1958–59 school year, what is known as the Lost Year, and finally reopened in the fall of 1959.

Bowman, Michael Hugh. “In the Eye of the Beholder: The Little Rock Central Crisis as a Television Event.” PhD diss., Arkansas State University, 2008.

Harper, Misti. “And They Entered as Ladies: When Race, Class and Black Femininity Clashed at Central High School.” PhD diss., University of Arkansas, 2017.

Kirk, John A., ed. An Epitaph for Little Rock: A Fiftieth Anniversary Retrospective on the Central High Crisis. Fayetteville: University of Arkansas Press, 2008.

Nichols, David. A Matter of Justice: Eisenhower and the Beginning of the Civil Rights Revolution. New York: Simon & Schuster, 2007.

“The Road from Hell Is Paved with Little Rocks.” Digital collection. University of Arkansas at Little Rock Center for Arkansas History and Culture. https://ualrexhibits.org/desegregation/ (accessed September 19, 2018).

Robinson, Brandon Earl. “The Band at Little Rock Central High School Before, During, and After Integration in 1957–1958.” PhD diss., University of Mississippi, 2014. 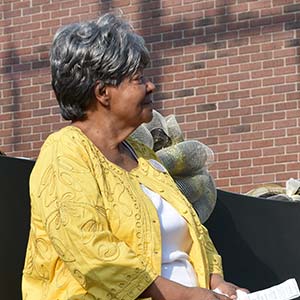