The city of Dierks in Howard County rose to prominence due to the thriving timber industry of the early twentieth century. Named for a well-known lumber businessman, the city has maintained its identity with an annual Pine Tree Festival but is also known as a tourist center in the Ouachita Mountains of western Arkansas.

The first families to acquire land in the township were Henry Block, John Cesterson, and James Wallen, all of whom arrived in 1848. A few more families gradually bought land in the area, which was then a dense forest of pine, oak, and hickory trees. One wagon trail connected the settlement—which they named Hardscrabble—to the town of Center Point (Howard County), ten miles south. During the Civil War, the citizens of Hardscrabble firmly supported the Confederate cause, and Reconstruction-era tension was high between local families and the Union militia. The Ku Klux Klan was active in the area during that time. Hardscrabble’s first church, Holly Creek Missionary Baptist Church, was formed in 1889.

Around 1900, the Dierks Lumber and Coal Company established offices in southwestern Arkansas and began to harvest timber from the area. The DeQueen and Eastern Railroad was established to move workers and supplies into the area and to carry lumber to market. Hardscrabble grew rapidly and changed its name to Dierks, honoring Hans Dierks, the oldest of the four brothers who co-owned the company. The Holman Hotel was built in 1903, and the first school in Dierks was completed in 1906. John William Pate opened a bottling company in Dierks in 1907 that produced fruit-flavored sodas, including strawberry, orange, and lemon. After 1910, the company also bottled Coca-Cola. Many farming families moved into the newly incorporated city as more men took jobs in the timber industry and in related fields.

Hardwood was harvested first and was used largely for barrel staves. Around 1917, the hardwood had been exhausted, and interest turned to the softer pine wood. The Dierks company built a large sawmill in the city, and the population continued to grow. The racial composition of the community also began to change. At the time of the 1910 census, Dierks had been home to only one African-American resident, but in 1917, with the new sawmill—and with many men joining the armed forces during World War I—the company created a segregated neighborhood for black workers and their families. The neighborhood included a hotel, two churches, a school, and stores. The Dierks company also operated a large store (which they called the Big Store) for white residents of the area, and private enterprise also flourished in the city. During the 1920s, the company worked with the U.S. Department of Agriculture’s Forest Service to promote the preservation and conservation of forests.

The lumber industry continued to operate during the Great Depression, but federal programs also had an impact on Dierks at this time. The Works Projects Administration (WPA) built streets and other structures in Dierks, including an American Legion building. A Civilian Conservation Corps (CCC) camp with 200 workers was established near Dierks in 1933. The CCC camp remained for more than two years, charged with controlling forest fires and preserving forested areas.

During World War II, men again left the city to serve in the armed forces, and the sawmill hired twelve women, who called themselves “Victory Volunteers,” although they were paid for their hours of work. They were employed as planers, craters, and shippers. On December 11, 1944, the public school was destroyed by fire, but it was rebuilt quickly and was open for classes by 1947.

A tornado struck Dierks on March 21, 1952, destroying many buildings and killing eight people. In August of the same year, the Dierks bank failed, due to a shortage of $160,000 in investor funds. By 1954, the Horatio State Bank was operating in the former building of the Dierks bank.

In June 1968, the U.S. Army Corps of Engineers began construction of Dierks Dam on the Saline River, creating Dierks Lake by May 1975. The lake provides flood control for the area as well as recreational opportunities and preservation of fish and wildlife.

In 1969, the Weyerhaeuser Corporation bought the property of the Dierks company (then called Dierks Forests Inc.). The Big Store closed in 1970. Schools had been desegregated in 1965, and Weyerhaeuser disassembled the African-American neighborhood to build a new plywood mill. By 1988, there were no African Americans living in Dierks. The city has been hit by two tornadoes in the twenty-first century, one of which destroyed the water treatment plant in 2009.

The city of Dierks has seven churches—including an Assembly of God, a Church of Christ, a Methodist church, and four Baptist congregations—and several businesses, including four banks. Jack Clawson Park is an outstanding feature of the community, with ball fields, playground equipment, and party pavilions. The park also hosts the city’s annual Pine Tree Festival, held the first Saturday in August (but with some events held the day before, even when that Friday is July 31). In the 2010 census, the city reported 1,133 residents, including four African Americans and forty-eight Latinos. The Dierks School District, consisting of an elementary school and a high school, serves 550 students as of 2012. 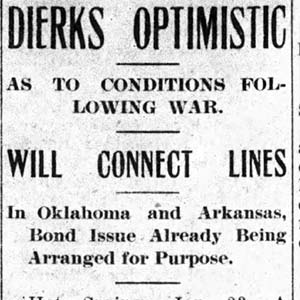