Tornadoes—destructive, violently spinning vortices of air extending from high within severe thunderstorms to the surface of the earth—are more common in the United States than anywhere else on the planet. They are particularly prevalent in the area known as “Tornado Alley,” where the proper ingredients come together: a combination of warm, moist air from the Gulf of Mexico pulled northward by storm systems dragging strong continental cold air from Canada. While Arkansas is not normally included on maps of the infamous Tornado Alley, which is usually considered to stretch from north Texas northward through Oklahoma, Kansas, and Nebraska, the state has suffered many devastating tornado outbreaks.

In January 1999, Arkansas recorded the most tornadoes on any individual January day in any state (fifty-six on January 21, 1999); the most tornadoes in the month of January; and the largest single outbreak ever to strike the state. The most deadly recent outbreak was on March 1, 1997, which resulted in twenty-five Arkansas fatalities. The deadliest outbreak in Arkansas history, however, occurred on March 21, 1952, when 112 people lost their lives. Bald Knob (White County) and Judsonia (White County) were the hardest hit, suffering over fifty fatalities. Cotton Plant (Woodruff County) also lost twenty-nine people in one of seventeen tornadoes that day, twelve of which were deadly.

In the first decade of the twenty-first century, about 622 tornadoes in Arkansas killed thirty-nine people, injured approximately 540, and caused more than $650 million in damage. Notable tornadoes during this period include a historic February 5, 2008, strike in which an EF-4 tornado tore a 123-mile-long path through seven counties in north-central Arkansas, killing twelve, injuring at least 140, and damaging or destroying 880 homes and 100 businesses. This path set an Arkansas record for length; Clinton (Van Buren County) and Atkins (Pope County) were among those suffering severe damage, while a second, shorter tornado devastated the town of Gassville (Baxter County).

Other large outbreaks in the twenty-first century occurred on December 18, 2002, May 16, 2003, and November 27, 2005. And while hurricanes usually bring only heavy rain to the state, on September 24, 2005, the remnants of Hurricane Rita spawned seventeen tornadoes that moved from southeast to northwest—an unusual state of affairs.  While the average Arkansas tornado is on the ground less than a mile, tornadoes in this outbreak reached path lengths of seventy-five and sixty-seven miles, with others of over twenty miles.

In April and May 2011, sixty-two tornadoes were reported, killing at least eleven people. On April 25 and 26, 2011, twenty-five tornadoes touched down, the most deadly of which struck Vilonia (Faulkner County) on April 25, killing four; this tornado had a path length of more than fifty miles. On May 25, 2011, a forty-seven-mile-path tornado tore through Johnson and Franklin counties.

The state’s fatality rates are also far higher than expected for a state with relatively low population density. From 1950 to 2006, the state ranked fourteenth in both number of tornadoes (1,407) and tornadoes per 1,000 square miles (26.6); it ranked second in the number of fatalities per 100,000 people (13.9), behind Mississippi (19.2). Counts from the Storm Prediction Center may not tell the entire Arkansas tornado story. Many researchers consider this tornado count far lower than the actual number due to Arkansas’s rural nature (low population densities) and conditions that make seeing and counting tornadoes difficult (hills, trees, and low cloud decks). If the number of tornadoes counted in more populated areas of the state were extrapolated across the entire area, Arkansas would likely be depicted on maps along with the more well-known Tornado Alley states. However, this method would not take into account local variations in topography that might account for increased or decreased tornado numbers. Interestingly, some of the same conditions that make counting difficult may also explain Arkansas’s relatively high fatality counts—geography or obstructions might prevent one seeing, and thus seeking shelter from, a tornado. Socioeconomic status may also play a role, especially in the past: lower incomes result in more manufactured homes or less sturdy housing stock, and lower overall educational level can affect understanding of climate cues or warnings. There are also fewer sturdy shelters, such as basements, in Arkansas. These indicators have steadily been improving in the state over the fifty-six-year period for which tornadoes are assessed here, but they are still counted by researchers as factors that increase vulnerability.

While April suffers the most tornadoes on average (291), late fall and winter tornadoes are not at all uncommon in Arkansas. The state also suffers many night tornadoes, in part due to early sunsets during the winter; this factor could also contribute to the state’s fatality rate. Tornadoes in Arkansas occur primarily between the hours of 5:00 and 6:00 p.m.

Tornado intensity has traditionally been measured according to the Fujita Scale (F-scale), which was based on damage to structures. It ranges from F0 (weak) to F5 (extreme). While this method is not a good measure of intensity, in that strong tornadoes may not hit a structure and variability in structure strength can produce wide variances in damage, it was, until the recent development of the Enhanced Fujita Scale, the only measure. As is the case across the country, the average Arkansas tornado since 1950 is very weak (F1.25); there has been only one recorded F5 tornado in the state, on April 10, 1929. Of the 336 fatalities in the state that occurred between 1950 and 2006, 211 took place in F4 tornadoes, of which there were only forty; only two fatalities took place in F0 and F1 tornadoes combined (962 total).

For additional information:
Burkett, Lucille Tucker. “The Story of a 1929 Tornado and Its Effect on a Woodruff County Family.” Rivers and Roads and Points in Between 12 (Spring 1984): 23–30. 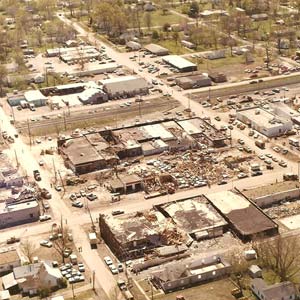 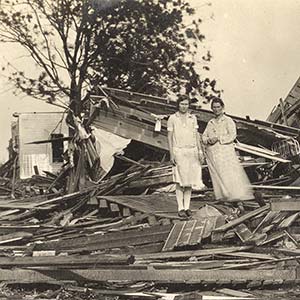