The Pea Ridge campaign was arguably the most significant campaign of the Civil War in the Trans-Mississippi region. The Union Army of the Southwest under Brigadier General Samuel Ryan Curtis defeated the Confederate Army of the West led by Major General Earl Van Dorn in the Battle of Pea Ridge on March 7–8, 1862, and played a pivotal role in claiming Missouri for the Union and opening Arkansas to Union occupation.

Missouri was high on the wish lists of both the Federal and Confederate governments in 1861. Federal Brigadier General Nathaniel Lyon drove pro-secession elements out of St. Louis, Missouri, then chased Major General Sterling Price’s Missouri State Guard to the southwest corner of Missouri and fought the Battle of Wilson’s Creek on August 10, 1861. The combined forces of Price and the Confederate infantry led by Brigadier General Benjamin McCulloch overwhelmed Lyon’s small Union army, leaving western and southwestern Missouri in the hands of the Rebels.

The new Federal commander in the Department of the Missouri, Major General Henry W. Halleck, could not allow the Missouri State Guard to roam free in that state. Price’s force remained a threat not just to the Federal base at St. Louis but to any projected Union move down the Mississippi River Valley. Missouri had to be cleared of these pro-Confederate forces before larger, more important campaigns could proceed.

Halleck appointed Curtis to head the reorganizing Federal forces recently led by Lyon in central Missouri. Curtis aggressively pursued the Missouri State Guard in southwest Missouri and into northwest Arkansas in a harsh winter campaign. Shortly after crossing the border, the Federals were temporarily checked by Rebel forces under Colonel Louis Hebert. Hebert fought a stiff rear-guard action against the Federals before retiring in good order in the Battle of Dunagin’s Farm (or Sugar Creek) on February 17. The small clash at Dunagin’s Farm should have been an ominous sign to Curtis: Hebert’s force was the vanguard of McCulloch’s army. Price eventually linked up with the rest of McCulloch’s forces in the Boston Mountains, but not until after they had burned Fayetteville (Washington County) on February 21. Union troops chasing Price finally reached the end of a long supply line and stopped around Bentonville (Benton County) to rest after the long pursuit.

Safely sheltered by the Boston Mountains—and with the Federals at the end of a long, tenuous supply line—the Confederates regrouped and ironed out command difficulties. Price and McCulloch disliked each other, so in January 1862 Van Dorn took command of the Army of the West, determined to keep the Federals out of Arkansas and to conquer Missouri.

Curtis concentrated the Army of the Southwest along Little Sugar Creek east of Bentonville and prepared for battle. He had about 10,500 men in the ranks, and the Confederate Army of the West had 16,000. Van Dorn decided on an ambitious plan: he would march around the Union position, cut the army off from its supply line back to Missouri, and force its surrender. The plan promised great rewards if it succeeded, great risk if it failed.

The Battle of Pea Ridge began on Friday, March 7, 1862, as Van Dorn split the Army of the West into two wings, one under McCulloch to go around the western edge of Pea Ridge and another under Price to attack south on the eastern edge of Pea Ridge. The two forces would unite at Elkhorn Tavern and annihilate the Federals. McCulloch’s force ran into resistance before the junction of his and Price’s columns. Worse, McCulloch was killed by Union pickets, as was his replacement, Brigadier General James McIntosh, leaving a leadership vacuum for the Confederates on that part of the battlefield. Price fared little better on his end. The fighting on March 7 proved inconclusive, with the Confederates able to maneuver into the Union rear but unable to unite and deal the Federals a crushing blow. Union forces under Curtis reacted slowly, but they effectively turned a full 180 degrees to face the Rebels. Curtis kept the Army of the Southwest united and ready for action the following day.

General Albert Sidney Johnston, head of the Confederate Department of the West, ordered Van Dorn and the remnants of his army to Corinth, Mississippi, for an attack on Federal forces in Tennessee. Van Dorn removed the army from Arkansas, virtually abandoning the state in the process. The Confederates never again had such an opportunity to conquer Missouri.

Initially, Curtis did not realize that the Army of the West moved to the eastern shore of the Mississippi. His main task had been to chase Confederate forces out of Missouri and keep them out. Once it became clear to Curtis that Van Dorn had evacuated Arkansas, the former shifted his campaign goal to the capture of the capital, Little Rock (Pulaski County).

In an epic march, the Army of the Southwest tramped across large swaths of Missouri and Arkansas, but in the end it failed to capture Little Rock. The army decamped from south-central Missouri in mid-April 1862 and pushed into northeastern Arkansas. The rugged terrain and very active Rebel bushwhackers prevented the Union forces from getting regular supplies and slowed the army’s pace to a crawl. The supply situation became so perilous that Halleck requested the U.S. Navy attempt to resupply the Army of the Southwest by going up the White River. The small Federal flotilla attempted to pass St. Charles (Arkansas County) on June 17. Rebel forces sunk ships in the river and sited heavy artillery to halt Union progress. A lucky shot pierced the boiler of the USS Mound City, forcing its abandonment. Federal troops from the Forty-sixth Indiana under Colonel Graham Fitch landed and stormed the Rebel emplacements, but the Union flotilla never did find the Army of the Southwest.

Curtis and the main body of Federals were in dire straits. Realizing he could not wait forever for relief, Curtis decided on a bold stratagem: he cut his supply line to Rolla, Missouri, with the intent that his forces would live off the land until the Army of the Southwest reached Helena (Phillips County). Now in command in Arkansas, Rebel General Thomas C. Hindman realized that the best place for his outnumbered forces to halt the Union forces was at James’s Ferry, roughly six miles from a small hamlet called Cotton Plant (Woodruff County). Unfortunately for the Rebels, the Federals beat them to the ferry. The Army of the Southwest’s vanguard under Colonel Charles Hovey forded the Cache River and was attacked by a force of roughly 5,000 men under Brigadier General Albert Rust on July 7. The Federals recovered from their initial surprise, rallied, and defeated the Confederates. Thus ended the best hope of the Rebels to trap the Army of the Southwest. The Federals continued their successful march to Helena, which they reached on July 12.

The Union march through Arkansas resulted in tremendous economic devastation. Curtis emancipated slaves on a large scale, virtually ending slavery in the eastern river counties. The arrival of the Federals in Helena ended the Pea Ridge campaign but not Union attempts to conquer Arkansas.

Schultz, Robert G. The March to the River: From the Battle of Pea Ridge to Helena, Spring 1862. Iowa City: Camp Pope Publishing, 2014. 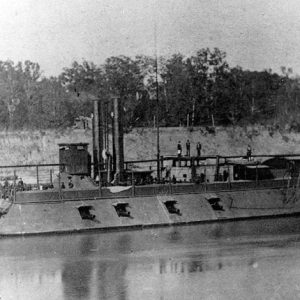