Lutherans have lived in Arkansas since the end of the eighteenth century, although the first Lutheran churches in the state were not built until the 1860s. There are not as many Lutherans in Arkansas as there are in the Great Lakes and northern Prairie states, but they are part of the blend of cultures and faiths of Arkansas.

History of Lutheranism
Lutherans are named for Martin Luther (1483–1546), an Augustinian friar and university professor who lived and worked in Wittenberg, Saxony (now part of Germany). Luther did not intend to create a new church, but rather to reform (or correct) the church of his time. In his teaching and preaching, Luther proclaimed the mottos “Grace alone, faith alone, Scripture alone.” He was opposed to any teaching or practice that suggested that the favor of God could be earned or purchased by sinners.

Luther’s influence was strongest in Germany and in the Scandinavian countries, although his ideas also had a large influence on Protestant movements in most of Europe. Unlike other reformers, Luther did not reject religious artwork and music. Lutheran church buildings are often characterized by their traditional architecture and artwork, and Lutheran worship is also recognizable for its traditional structure and sound. Martin Luther, and Lutherans after him, practice two “sacraments”—Holy Baptism and Holy Communion—regarding them as acts of God rather than acts done for God. Lutheran groups are congregational in policy, meaning that each congregation calls its workers and forms its own budgets and plans.

Lutherans continue to stress the importance of education. Often groups of Lutherans gathering in a new place build a school before they build a church building. Lutherans are also active in outreach and human care, including help in time of disaster and also long-term help for people and communities. Although Lutheranism began in northern Europe, it is active in South America, Africa, and many parts of Asia, as well as in the United States and Canada.

Lutherans in North America
Lutheran groups were among the settlers of the Atlantic coast in the seventeenth century, most notably along the Hudson and Delaware rivers. By the time of the Revolutionary War, Lutherans lived in ten of the thirteen colonies, as well as in Canada and western territories. Most immigration from Germany and Scandinavia, however, took place in the nineteenth century. Because most German and Scandinavian groups came for economic reasons, not fleeing religious persecution, they often found themselves without Lutheran clergy. Some sent word back to Europe asking for Lutheran ministers to join them in America. Others accepted whatever clergy happened to be available in the area—Methodist, Baptist, or even Mormon. Eventually, Lutheran congregations associated into bodies called synods that were able to build seminaries to train pastors. Several synods or similar groups had already formed by 1840, and nearly sixty more were formed between 1840 and 1875. Often, the synods reflected the language and culture of the settlers’ origin (Norwegian Synod, Swedish Synod, etc.) or the city or state where they settled (Buffalo Synod, Iowa Synod, etc.). For a time, various synods organized themselves into a General Synod and a General Council, with a United Synod South developing during the Civil War. The gathering of larger Lutheran bodies did not take place until the twentieth century, when the dozens of synods began to unite.

Lutherans in Arkansas
The first known Lutherans to live in Arkansas were German farmers who lived near Arkansas Post (Arkansas County) in the 1790s. Because both the Spanish and French governments were hostile to Lutheranism, these farmers never built a church or called a pastor, but they probably practiced their religion in private family devotions and local gatherings. Other settlers followed after Arkansas became a U.S. territory with the Louisiana Purchase. A lengthy editorial appeared in the Arkansas Gazette on May 22, 1833, welcoming 140 immigrants from Germany to the Little Rock (Pulaski County) area. The editorial mentions a minister among the group, but no more is known about him. By 1836, there were sixty German-Lutheran families living near Little Rock, mostly farmers. Although they were led by a Reverend Klingelhoffer (or Klingenhofer), they appear to have made no effort to create a Lutheran congregation.

A similar group arrived in Long Prairie (Sebastian County) ten years later. Until the Civil War, they lived and farmed in that area, meeting in their homes on Sundays for services of Bible readings, hymns, and prayers, though they had no pastor. Difficulties with guerrilla fighters during the war caused them to relocate to Fort Smith (Sebastian County) where, for a time in 1864, they ran the only school in the city. During these years, they continued to exist without a pastor or church building. Finally, in 1868, Pastor Martin L. Wyneken answered the call to serve this group, and the first formal Lutheran congregation was chartered in Arkansas. On his way to Fort Smith on the Arkansas River, Wyneken met with the German Lutherans in Little Rock and led them in worship. First Lutheran Church of Fort Smith and First Lutheran Church of Little Rock both were formed in 1868.

Lutherans in Arkansas, as in all of North America, faced the challenges of assimilating while maintaining their identity. The use of the German language in worship and teaching was seen by some as a way of preserving Lutheranism and viewed by others as a barrier to outreach and the growth of the church. When the United States entered World War I against Germany, many congregations chose to reduce or abandon their use of the German language. Occasional acts of hostility to German Lutherans occurred in Arkansas, such as in Lutherville, where the Pastor Wilhelm H. Roerig was driven out of his house and threatened by gunmen. Lutherans were also concerned about reaching out to groups other than German and Scandinavian immigrants. First Lutheran Church in Little Rock supported work among African Americans by LCMS missionaries J. Friedrich Doescher and Fredrick Berg beginning in 1877, the first such outreach by Lutherans in North America; Berg served as pastor of Negro Lutheran Church in Little Rock, and taught in its school, until 1881. Their missionary work supported St. Paul Lutheran chapel, two blocks south of First Lutheran Church. The chapel was served by part-time pastors and seminary students for many years and was the center of a ministry directed from St. Louis, Missouri, but located in central Arkansas and directed at several southern states.

Lutheran congregations also maintain seven elementary schools and seven early childhood centers in Arkansas. For several years, they operated a high school in Little Rock, but it closed in 2010 due to financial problems. Lutherans provide outreach and community services for college students in Fayetteville (Washington County), Little Rock, and Conway (Faulkner County), and a support group for the blind and visually impaired in Little Rock. Lutherans are actively involved in human care, including disaster relief and health care concerns. While their primary focus remains “grace alone, faith alone, Scripture alone,” their expressions of grace, faith, and Scripture touch many lives in Arkansas and around the world. 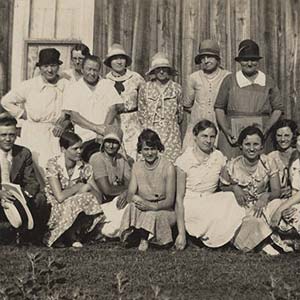