In the last quarter of the nineteenth century, the demand for wood fiber for a growing country led lumbermen, investors, and speculators into the vast forest that stretches from east Texas across the lower Mississippi River Valley to the Florida panhandle. Demand having outstripped the forest resources of the Great Lakes region, other sources for timber were sought. One result of the interest in the forestland of the South was the founding of Crossett (Ashley County).

Crossett was founded in the late 1890s by three investors from Davenport, Iowa— Edward Savage Crossett, Austria native Dr. John Wenzel Watzek, and Charles Warner Gates. Today, Crossett is one of the state’s leading manufacturing centers, billing itself as the “Forestry Capital of the South.”

Ashley County, formed in 1848, sprawls from the Delta farmlands in the east to the Ouachita River in the west. In between is Hamburg, the county seat, incorporated in 1854, which became a trading center. The land in western Ashley County was of the upland forest variety and was largely undeveloped and sparsely settled in this era, as the terrain was unsuitable for farming. Towns which were formed, such as Fountain Hill, had populations under 500.

As an established community with rail service, Hamburg would seem to have been the logical site for a new sawmill. However, company officials eventually decided that the better course would be to establish a new town, and Crossett was born. The site chosen was approximately fifteen miles west of Hamburg.

Of the three investors, Crossett and Gates were veteran lumbermen, while Watzek was Edward Crossett’s physician. Also considered a founder is Edgar Woodward “Cap” Gates, Charles’s brother. Cap Gates was sent to Arkansas to acquire timberland and to oversee construction of the sawmill and the building of the town. He became Crossett’s leading citizen.

From its founding, the history of the city was the history of the Crossett Lumber Company—incorporated in 1899—and its successors. Crossett is noted for its role in the evolution of sustained yield forestry, in which forests are treated as a renewable resource, or crop.

In the early 1900s, a legend about the Crossett Light began to spread, around the same time as railroad expansion. In 1904, an African-American man named Glenco Bays was burned at the stake in a particularly atrocious lynching. Later that same year, an unknown black man was lynched near the community. In 1932, Frank Tucker was lynched in Crossett.

The progressive attitude of Crossett’s founders is demonstrated by the relationship they formed with the School of Forestry at Yale University, beginning in 1912. The tie with Yale resulted in improved manufacturing and silviculture practices, and the Crossett company and other lumber companies in the region hired many Yale-trained foresters as the need for trained professionals came to be recognized.

Yale’s initial research was eventually augmented by the studies at the 1,680-acre Crossett Experimental Forest, headquartered about seven miles south of town. Established in 1934 and still in operation today, the U.S. Forest Service’s research program at Crossett focuses on the silviculture of naturally regenerated loblolly and shortleaf pine forests. Several of the buildings on the Crossett Experimental Forest are on the National Register of Historic Places.

The city’s development was controlled by the Crossett Lumber Company, which owned all the land, mills, and residential real estate comprising the Crossett of the early 1900s. As a result of city planning practices that some deemed restrictive, three unincorporated commercial and residential areas developed to handle the population growth: North Crossett, South Crossett, and West Crossett.

As a small Southern manufacturing center, Crossett seemed to be somewhat isolated as the nation went through periods of radical change. The Roaring Twenties, the Great Depression era, and World War II came and went with little visible effect on the city. Demand for its products grew steadily, and unemployment was low. In 1944, William Nolin Jeffress started the Jeffress Music Company, and his nephew Marty Phillips carried it on as the Jeffress/Phillips Music Company. It is still running today and is unique in that it publishes seven-shape note music.

Likewise, Crossett avoided the upheavals some communities felt as a result of the civil rights movement. Following the Brown v. Board of Education of Topeka, Kansas decision in 1954, leaders in both the black and white communities engaged in talks which finally resulted in the integration of the Crossett schools in 1968 without incident.

Education
The founders insisted on having a first-class school system. Seeing the advantages of the city schools in the 1940s, many rural “one-room” schools voluntarily consolidated into the city’s school system, and an extensive busing operation developed. The Crossett School District was one of the smallest districts included when it was accredited in the 1940s by the prestigious North Central Association.

Industry
Crossett became a diversified forest products manufacturing center with the construction of a Kraft paper mill in the mid-1930s. A division producing and marketing specialty chemicals and charcoal followed. In 2006, employment in all paper operations was about 1,500, with an annual payroll of $160 million. Following a divisive labor strike in 1940, the workers in Crossett’s manufacturing plants were granted the right to establish trade unions. The labor movement in Crossett has existed for over sixty years, with only an occasional strike to mar an excellent relationship between management and labor.

In 1962, Georgia-Pacific Corporation bought the assets of the Crossett Lumber Company, creating the “Crossett Division” of Georgia-Pacific. The company immediately began to manufacture plywood from Southern yellow pine. Georgia-Pacific facilities in Crossett also include a chemical plant and pulp and paper production plant. In September 2011, Georgia Pacific announced that it would indefinitely suspend the Crossett sawmill and plywood sheet manufacturing facility, which could cause up to 700 workers to be laid off.

Also contributing to the town’s economy are companies that convert raw paper to other products, such as paper bags, and several small fabricating and engineering shops that serve the forest products industry.

With this industry, however, has come environmental concerns. According to the 2011 USA Today Special Report “The Smokestack Effect: Toxic Air and America’s Schools,” Crossett ranked in the first percentile of the nearly 128,000 schools studied for schoolchildren’s exposure to carcinogens. Some believe that the industrial facility owned by Koch Industries (which acquired Georgia-Pacific in 2005) is to blame for an unusual number of serious health problems in the area. In 2018, it was revealed that the facility had, for decades, been releasing into the air hydrogen sulfide at a level above the thresholds of safety, yet the company never faced any enforcement actions from the Arkansas Department of Environmental Quality.

Georgia-Pacific announced plans in June 2019 to close its bleached board mill in Crossett by October, costing at least 530 jobs at the 650-acre complex; a particle board plant in Hope (Hempstead County) will also close, costing 100 jobs.

Crossett is served by a first-class airport, with a runway of over 5,000 feet. Capable of handling small corporate jets, the airport serves the needs of the industrial community as well as the surrounding agricultural area.

Famous Residents
Some notable Crossett residents have achieved a fair amount of fame through the years. Jim “Justice Jim” Johnson, a segregationist Democratic nominee for governor in 1966, previously served a term on the state Supreme Court. Gretha Boston won a Tony Award in 1995 for her portrayal of Queenie in the Broadway revival of Show Boat. Barry Switzer, former football coach at the University of Oklahoma, was inducted into the National Collegiate Football Hall of Fame in 2001. K. T. Oslin is a country music star who became famous in the 1980s and continues to produce regular albums. 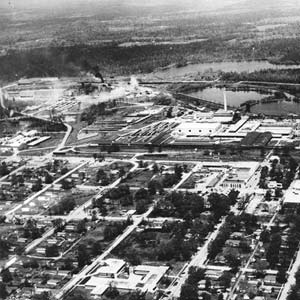