An unknown African-American man was lynched near Crossett (Ashley County) on September 4, 1904, for having allegedly “attempted to assault two white girls.” The names of none of the parties are mentioned in newspaper reports.

The reported assault occurred on the night of Saturday, September 3, at a place called the Bonham plantation, some thirty-five miles from Crossett. The following day, according to the Arkansas Gazette, “a posse of farmers” captured the suspect, apparently within Crossett, and took him to “a place about three miles from Crossett and strung him to a tree, after which the mob vented its rage by riddling the body with bullets.” Fifteen minutes after the murder, the mob dispersed. In reference to the mob, the Gazette report ends with the line, “None of them would give out any information,” suggesting perhaps that either the reporter or an informant to the reporter had personal contact with members of the posse and attempted to interview them.

The same information appears in a variety of state and national papers. According to some tabulations, this murder was one of twenty lynchings to have occurred in Ashley County alone. Earlier in 1904, Glenco Bays was burned at the stake near Crossett. 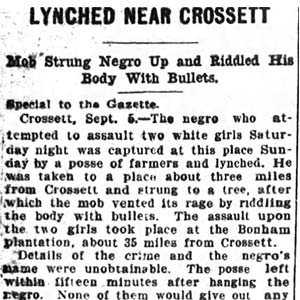