Philip Edwin Kaplan is a noted lawyer living in Little Rock (Pulaski County). As a nationally known attorney focusing on civil and human rights, he helped inmates in the Arkansas prison system fight unjust treatment. He also argued cases against the teaching of creationism in Arkansas’s public schools and in support of a professor who lost his job for being a communist. Philip Kaplan was born in Winthrop, Massachusetts, on January 4, 1938, and grew up in Lynn, Massachusetts, with his parents and one brother. He studied government at Harvard University and graduated in 1959. He graduated from the University of Michigan with an LLB degree in 1962. He was licensed by the Commonwealth of Massachusetts but soon relocated to …

Nurse, teacher, and healthcare innovator Regina Kaplan was the hospital administrator and director of the nursing school at the Leo N. Levi Memorial Hospital in Hot Springs (Garland County) for thirty-five years. She was active in national and community organizations, and has been called Arkansas’s “Lady with the Lamp.” Regina Kaplan was born on May 12, 1887, in Memphis, Tennessee, the third of five children of German immigrants Gershon Kaplan and Adella Hannah Traube Kaplan. Her father had been a school teacher in Germany. The family moved to Denver for her mother’s health. Unable to afford medical school to become a doctor, at age seventeen, Kaplan entered Denver’s Mercy Hospital Training School for Nursing. She graduated in 1908 at the …

Deena Kastor is a long-distance runner who was named All-American at the University of Arkansas (UA) in Fayetteville (Washington County). She is an Olympic medalist for the marathon, holds American records in both the marathon and half-marathon, and is an eight-time national cross-country champion. She was named the top women’s marathoner in the world by Track and Field News magazine in 2006. Kastor is renowned for her courage after a freak mishap during the World Cross-Country Championships in 2000. Deena Michelle Drossin was born on February 14, 1973, in Waltham, Massachusetts, later moving to Agoura Hills, California. She began long-distance running at age thirteen, breaking the 3,000-meter national record and reigning as the two-time National Cross Country Champion in the … 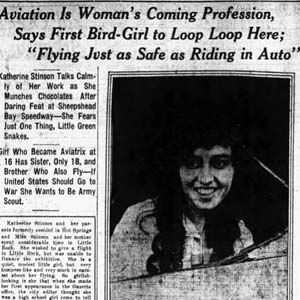 William Marmaduke Kavanaugh was briefly a U.S. senator for Arkansas after the death of incumbent Jeff Davis. In addition, Kavanaugh also served as managing editor of the Arkansas Gazette from 1890 to 1896, sheriff and tax collector for Pulaski County from 1896 to 1900, probate and county judge from 1900 to 1904, and member of the National Democratic Committee from Arkansas from 1912 to 1915. William M. Kavanaugh was born on March 3, 1866, near Eutaw in Greene County, Alabama, to the Reverend Hubbard Hinde Kavanaugh and Anna Kimbrough Kavanaugh; he was one of six children. His father was a minister in the Methodist Episcopal Church, South, and chaplain of the Orphans Brigade, which was the only Confederate brigade from …

Victor Cicero (V. C.) Kays was the founding president of the First District State Agricultural School, which evolved into Arkansas State University (ASU) in Jonesboro (Craighead County). During his thirty-two-and-a-half-year tenure, Kays guided the institution through trying circumstances and led its transformation from a regional agricultural training school to a college that offered four-year academic degree programs. He was successful despite hardships that were magnified by the impact of two world wars, the Great Depression, meager public funding, and a fire that consumed the college’s main building. V. C. Kays was born on July 24, 1882, in Magnolia, Illinois, one of six children of John A. Kays and Mary Alice Kays. His father was a farmer. After finishing high school …

Vocalist Jeff Keith is best known for his work as lead singer of the popular American “hair metal” band Tesla, which he joined in 1982. Although Keith spent most of his life in northern California and the small town of Idabel in McCurtain County, Oklahoma, he was born in Arkansas in Texarkana (Miller County). Keith has performed on numerous tours with artists such as Alice Cooper, Def Leppard, Poison, Van Halen, David Lee Roth, and Led Zeppelin. He is also known for his support of Toys for Tots, Big Brothers Big Sisters, and Nor Cal Clean and Sober Living through his annual Ride for Reason concerts. Jeffrey Lynn Keith was born on October 12, 1958, in Texarkana. When Keith was …

George Clyde Kell was a professional baseball player, announcer, and businessman and is a member of the Arkansas Sports Hall of Fame and the National Baseball Hall of Fame. A lifelong resident of the small Arkansas town in which he was born, Kell also served for ten years as a member of the state’s Highway Commission and was campaign chairman for Dale Bumpers in the 1970 gubernatorial race. George Kell was born August 23, 1922, in Swifton (Jackson County) to Clyde and Alma Kell. His father, a barber, was a pitcher on the local semiprofessional baseball team, and Kell and his two younger brothers grew up playing the game. After high school, Kell began studying at Arkansas State College (now …

James Kennedy was a white man lynched in Dallas County in 1866, apparently for his open Unionist leanings. His murder shows the risks that many people who had allied with the Union during the Civil War faced in parts of Arkansas in the immediate postwar period, when pro-Confederate vigilantes perpetrated with impunity a number of assassinations and attacks under the guise of lawfulness. The August 3, 1866, lynching of forty-four-year-old James Kennedy and other men made news in the August 10, 1866, Little Rock Daily Gazette (under which name the Arkansas Gazette then operated) as follows: “We learn from a reliable source that on Wednesday night last a party of ten or twelve men went to the residence of James …

John Kennedy was a Union artilleryman who won a Medal of Honor for gallantry in the 1864 Battle of Trevilian Station in Virginia. He spent the last part of his life in Arkansas and is buried in Oakland and Fraternal Cemetery in Little Rock (Pulaski County). John Kennedy was born on May 14, 1834, in County Cavan, Ireland. Immigrating to the United States, he enlisted in the Second U.S. Artillery, Battery M, on December 16, 1857, at Philadelphia, Pennsylvania, committing to a five-year term of service. Kennedy had served during the 1858 Utah Expedition before the Civil War began and was involved in many actions with Battery M in the Eastern Theater during the Civil War. Kennedy and the Second …

Jon Kennedy served as a political cartoonist for the Arkansas Democrat from 1941 to 1943 and again from 1946 to 1988, totaling nearly fifty years, one of the longest employments with a single newspaper in the nation. Kennedy was Arkansas’s first full-time professional newspaper artist, and his cartoons highlighted Arkansas and world topics, won numerous awards, and were featured in national newspapers including the New York Times. Jon Kennedy was born on August 19, 1918, in Springfield, Missouri, to Brownlow Kennedy, who was a telegraph operator for the railroad, and Ida Kennedy, who was a homemaker. At age seventeen, and while still in high school, he began working as an artist for the Springfield Leader Press, where he was employed …

Nannerl Overholser Keohane has been a leader in American higher education, first as president of Wellesley College and then as president of Duke University. Both symbolically, as a pioneering female leader, and substantively in the way she shaped the direction of those two institutions, Keohane has had a major impact on the college and university landscape into the twenty-first century. Nannerl Overholser was born on September 18, 1940, in Blytheville (Mississippi County). The daughter of Grace Overholser and James Overholser, who was a Presbyterian minister, she was the oldest of three children and was named after Wolfgang Amadeus Mozart’s sister. The family relocated several times during her childhood, both to Texas and to South Carolina, as well as a stint in …

Donald Eulon Kessinger played major league baseball for sixteen years in the 1960s and 1970s, mostly for the Chicago Cubs. He is also the only Arkansan to have both played in and managed in the major leagues, leading the Chicago White Sox for more than half a season in 1979. Don Kessinger was born in Forrest City (St. Francis County) on July 17, 1942, one of three children of Howard and Ida Kessinger. His father owned and operated Kessinger’s Grocery in Forrest City, and his mother owned a women’s clothing store called Kessinger’s. As a high school athlete in Forrest City, he excelled in four sports: baseball, basketball (in which he earned all-state honors three years), football (in which he …

Sue Kidd was a female baseball star who gained local fame for the athletic prowess she displayed while playing on and against all-male baseball teams in Van Buren County and surrounding areas. Glenna Sue Kidd was born in Choctaw (Van Buren County) on September 2, 1933, to William Marvin Kidd and Julia Duncan Kidd, local farmers and merchants, though her father also served as postmaster at Choctaw. She had five siblings. The original community of Choctaw was covered by water when Greers Ferry Lake was filled in the 1960s. That community is now referred to as “old Choctaw,” as opposed to the present community of “new Choctaw” located on state Highway 65. As a student at Clinton High School, Kidd …

Andrew Wilson Kilgore is a Fayetteville (Washington County) photographer best known for his arresting black-and-white portraits, primarily of fellow Arkansans set against a plain backdrop. By his own estimation, Kilgore photographed more than 30,000 people in Arkansas between early 1971 and late 2011. Andrew Kilgore was born on November 2, 1940, in Charlottesville, Virginia. He was the second of three children born to Bill and Carolyn Kilgore, both natives of Washington DC. Kilgore’s family moved several times when he was a child, first relocating to the Chicago, Illinois, suburb of Aurora shortly after World War II and then to El Paso, Texas, in 1956. Kilgore cites his time as a teenager along the Texas border as the period of his …