Betty May “Julie” Adams was an actress who made more than fifty films and appeared in numerous television series. She was raised in Little Rock (Pulaski County) and attended Little Rock Junior College, now the University of Arkansas at Little Rock (UA Little Rock). She may be best remembered for her role in the 3-D thriller and cult classic Creature from the Black Lagoon. She also had a recurring role on the popular TV series Murder, She Wrote.

Betty May Adams was born on October 17, 1926, in Waterloo, Iowa, but grew up in Little Rock, where she began acting in elementary school. After attending Little Rock Junior College, she left in 1946, after being crowned Miss Little Rock, to live with an aunt in Hollywood, California, where she studied dramatics and worked part time as a secretary.

Her first movie role was a small, uncredited appearance as a starlet in Paramount’s Red, Hot and Blue (1949). Next came a series of low-budget westerns for Lippert Studios, billed as Betty Adams. She married screenwriter Leonard B. Stern in 1951, but they divorced two years later. In 1951, after helping on a screen test with an actor under consideration, she was signed to a contract with Universal Studios, where her first name was changed to Julia and, in 1955, to Julie.

Around this time, Universal made a publicity splash by insuring her legs. In 1954, still billed as Julia, she was cast in the role for which she is often remembered, as Kay Lawrence in the 3-D thriller, Creature from the Black Lagoon. Her role was described as “not only lovely, but an intelligent researcher who is both feminine and strong-willed.”

Notable movies include the film noir Slaughter on Tenth Avenue (1957), Tickle Me (1965) with Elvis Presley, and the TV movie Go Ask Alice (1973). In 1954, she married actor Ray Danton; they had two sons. Danton was rising to fame in the 1950s for playing smooth operators and gangster types, gaining notice for his role in I’ll Cry Tomorrow (1955) as well as two gangster films, The Rise and Fall of Legs Diamond (1960), and Portrait of a Mobster (1961). She and Danton divorced in 1981. She was later in a long-term relationship with film writer Robert M. Cohen.

She was cast in a leading role as Jimmy Stewart’s wife on The Jimmy Stewart Show, a 1971 family situation comedy television series. From 1987 to 1993, she had a recurring role as flirtatious real estate agent Eve Simpson on the popular TV mystery series Murder, She Wrote. Adams continued to appear occasionally in episodes of television shows, including Cold Case and CSI:NY.

Adams was inducted into the Arkansas Entertainers Hall of Fame in 2000. In 2011, she published her autobiography, The Lucky Southern Star: Reflections from the Black Lagoon. In 2012, Adams won the Rondo Award for the Monster Kid Hall of Fame at the annual Wonderfest in Louisville, Kentucky. In 2013, she was honored with the University of Arkansas at Little Rock’s Distinguished Alumni Award.

Adams died on February 3, 2019, in Los Angeles. She is buried in Oak Ridge Cemetery in Malvern (Hot Spring County), where her parents are also buried.

Julie Adams is the most beautiful woman I have ever seen in films from the 1950s. I am one of her fans, and I am glad that she represented Arkansas as an Arkansas native. I enjoy all of her movies and enjoyed her in a Bonanza episode called “The Courtship” with Dan Blocker–one of my favorite episodes.

I am especially excited that she attended Little Rock Junior College (now the University of Arkansas at Little Rock) in the 1940s. 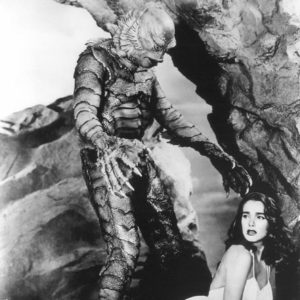