The varied ecosystems in Arkansas enable a large variety of wildflowers to grow within the state. From the river deltas to the mountaintops, Arkansas boasts an abundant array of over 600 native wildflowers. The majority of wildflowers in Arkansas are along rural roads and secluded areas. Due to the growing population and changes in the environment, the areas in which wildflowers grow are in constant fluctuation. Although highways and the development of land have eliminated a majority of the state’s native wildflowers, programs are under way to preserve these flowers and bring them back to the roadways.

Common Wildflowers
The most common wildflowers on Arkansas highways today are as follows:

An in-depth list with descriptions of Arkansas wildflowers was written by Carl G. Hunter and published by the Ozark Society Foundation in 1984. Hunter covered 600 species of native wildflowers and included 484 photographs. He also worked to change the way Arkansas treated its roadsides by reducing the use of herbicides and changing mowing schedules along Arkansas highways. He worked with organizations that supported the preservation and growth of Arkansas natural wildflowers.

Preservation Work
The Arkansas Natural Heritage Commission maintains many natural areas to offset the negative influences of surrounding land use. Not only do the most common human influences interrupt the natural ecological process, but fire suppression has also caused problems. Tall grass prairies have become overgrown with trees and shrubs, which has eliminated many natural grasses and wildflowers. Carefully planned prescribed fires can restore an area to its natural state. However, when providing a healthy habitat for native plants, many non-native, invasive plants can soon emerge. These invasive plants are carefully controlled by mechanical and herbicidal means.

In addition to the work of the Arkansas Natural Heritage Commission, the Arkansas Department of Transportation works to beautify Arkansas highways with wildflowers in a number of ways. It sponsors Operation Wildflower, which assists in establishing and maintaining wildflower populations along Arkansas highways with seeds donated by sponsors. Interstates and primary highways with large medians offer the best display for showy wildflowers. In addition, the Wildflower Sign Program helps increase public awareness by identifying areas sponsored by local clubs, groups, or businesses.

The Arkansas Department of Transportation issues a free “Wildflowers of the Arkansas Roadways” brochure, which includes a map of routes covering over 1,000 miles within Arkansas where native wildflowers bloom. Also included are photographs of some of the most common wildflowers of Arkansas, as well as a brief description of each and when they bloom.

The Arkansas Native Plant Society (ANPS), organized in 1980, was formed to promote the preservation, conservation, and study of the wild plants and vegetation of Arkansas. The society also helps to educate the public as to the value of native flora and its habitats. The ANPS organizes field trips to various locations within the state to encourage participants to get a first-hand understanding of the diversity of native flora. It also provides scholarships and research grant, produces publications on the subject, gives awards to those citizens who have conducted outstanding research or aided conservation efforts, and sponsors the Vascular Flora of Arkansas Project. The Arkansas Vascular Flora Committee (AVFC), comprising graduate students, professors, and botanists who have collected, researched, studied, and documented the state’s flora, began in 2000. The list of collected flora includes both common and rare plants and those native and introduced from other areas. The collection of over 250,000 plants not only includes wildflowers but other herbaria. Some of the previously listed plants have not been found, but new plants have been found, as well as some that were thought to no longer grow within the state. The AVFC also offers conferences, workshops, and symposia throughout the state.

Devil’s Den State Park offers a wildflower and butterfly garden. Begun by a master gardener, this project presents wildflowers that are native to the area.

The Boone County Master Gardeners began a Daffodil Labyrinth in 2005, located on Highway 65 South. The labyrinth design consists of a one-way path that leads to a center. Thirty types of narcissi bulbs are planted in the 1,300-square-foot plantings area; a total of 4,300 bulbs were planted. A contrasting river of over 800 blue grape hyacinths (Muscari Armenicacum) runs through the labyrinth.

The South Arkansas Arboretum in El Dorado (Union County) contains many wildflower specimens, along with other plants native to the state. This thirteen-acre area exhibits not only plants indigenous to Arkansas’s West Gulf Coastal Plain but some exotic species as well.

Managed by the Arkansas Natural Heritage Commission, the Nature Conservancy of Arkansas, Friends of Baker Prairie, Caretakers of the Prairie (COPS), and students from Harrison High School, the Baker Prairie Natural Area is a seventy-one-acre area in the middle of Harrison (Boone County). In addition to maintaining the field of flowers, students collect seeds to sow on an adjacent area. A controlled burn-off is done each spring or fall to encourage new plant growth. This area has been noted as the best display of wildflowers in Arkansas.

Inspired by the Baker Prairie project, Mel Harness, a landowner from Prairie View near Harrison (Boone County), restored twenty acres he owned to its original prairie state. With grants from several sources, he was able to restore the area to a beautiful prairie rich in grasses and wildflowers. The Harness family still owns and maintains the land. 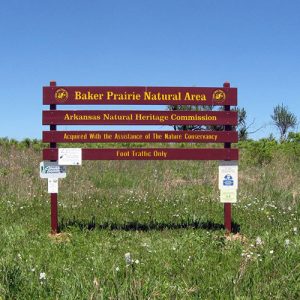