Miller County’s location in southwest Arkansas made it the “Gateway to the Southwestern United States” through its rivers, stagecoach roads, and Native American trails. It is an area of flat plains and gentle hills with an abundance of pine and hardwood forests. The northern and eastern border is marked by the meandering Red River, and the climate is moderate with a growing season of 254 days. The rich soil grows cotton, sorghum, rice, corn, and other crops. The county is also known for its seat of Texarkana, which borders its sister city of Texarkana, Texas.

Pre-European Exploration through European Exploration and Settlement
People have lived in the Miller County area for at least 10,000 years. Over 400 archaeological sites known in the county attest to Native American settlement and use, including the Crenshaw Site, which includes at least four mounds. Early records suggest that the remnants of the Hernando de Soto expedition may have passed through Miller County and set up camp near present-day Spring Lake Park in Texarkana, Texas. (The expedition’s chronicles describe an area that could be Spring Lake Park, but it is not further identified.)

Louisiana Purchase through Early Statehood
By 1778, the Caddo Indians, who had inhabited the area, left their towns in the Great Bend region of southwest Arkansas and retreated downstream to live near friendly French colonial authorities and nearby Caddo friends and kinsmen in what today is northwest Louisiana. In the eighteenth century, this area was claimed by the Quapaw, although their main villages were along the Arkansas River. Miller County was part of the Louisiana Purchase in 1803. Interest in settling in this part of the state was slow to develop because the U.S. government had listed the area as “swamplands,” unfit for settlement, under the Swamp Land Act of 1850. The Great Raft, a tangle of floating timber and other debris, stretched for miles along the Red River, making travel difficult or impossible until it was snagged out permanently by Henry Shreve.

Lost Prairie was founded in 1816 by Colonel Ben Milam, who mistakenly thought he was in Texas. Davy Crockett passed through the settlement on his way to the Alamo.

The legislature established Miller County on April 1, 1820. At the time, it included most of present-day Miller County and parts of Bowie, Cass, Delta, Fannin, Franklin, Hopkins, Hunt, Lamar, Morris, Red River, and Titus counties in Texas. (Miller County was part of the disputed “Horse’s Head” area of northeastern Texas and southwestern Arkansas, too far north for Mexico to control well and too far west for the United States to control well; while it was technically under Mexican jurisdiction, it truly was not under any country’s control.) The county was named for territorial governor James Miller, a native of Temple, New Hampshire; the first county seat was in the John Hall house in the Gilliland settlement. The county’s establishment was problematic because Mexico claimed much of eastern Texas. Texas declared its independence from Mexico in 1836, and the first Miller County was abolished two years later. Governor James Conway said the easiest solution would be to abolish the county and remove its records to a “more patriotic” area—that is, in the United States.

Until 1874, area settlers found themselves included in Lafayette County. The first Miller County had five post offices by 1835: at Jonesborough, McKinneyville, Mill Creek, Spanish Bluffs, and Sulphur Fork. The Southeast provided the largest number of settlers to the area during this time as disheartened citizens of the Confederacy moved west after the Civil War.

One of the county’s earliest towns, Rondo, east of Texarkana, was founded before the war by Dr. L. C. Cully on land originally owned by James Sanders Trigg. Trigg, who had been educated in France, named the town after the French game of chance, rondeau.

Civil War through Reconstruction
During the Civil War, Miller County’s citizens volunteered for several Confederate units: the Bright Star Rifles, the Confederate Guards, the Hempstead Hornets, and the Prairie DeRoane Guards. Parts of these units merged into the Fourth Arkansas Infantry. Another company, founded in 1862 under Captain William Readick Kelley, became part of the Twentieth Arkansas Infantry. While no battles took place in the county, several fortifications were built as a precaution. Confederate soldiers who died from disease while stationed in Rondo in 1862 are buried in the Confederate Section of the Old Rondo Cemetery.

Times changed with the coming of the railroad. Beginning in the 1850s, the Cairo and Fulton Railway was surveyed through Arkansas and received several land grants, including those in Miller County. The Texas and Pacific Railway was building toward the area from the west, and eventually the railways met at Texarkana. Each rail company sold town lots, creating the largest city in the county in the winter of 1873 and spring of 1874; the Texas and Pacific sold town lots on the Texas side, and the Cairo and Fulton sold town lots on the Arkansas side. The combined population of Texarkana, Arkansas, and Texarkana, Texas, reached 2,500 by 1880 and grew rapidly until the 1960s, when it reached 31,686.

Post Reconstruction through the Gilded Age
Miller County was reestablished in 1874, with Texarkana as county seat. From 1874 to 1900, the county’s population boomed, mainly in response to the railroad and the influx of immigrants and settlers. By 1900, the population was 17,558, but it remained a predominantly rural county; it had 1,967 farms in 1900. Texarkana, the largest city, provided many employment opportunities with railway companies, dry goods stores, grocery stores, and other retailers.

American composer Scott Joplin moved to the city with his family as a small child in the late nineteenth century. His most famous opera, Treemonisha, is set near Rondo.

The county was the site of multiple incidents of racial violence during the late nineteenth and early twentieth centuries. The county was the site of a short-lived so-called race riot in 1880. Edward Coy was burned alive in 1892 for allegedly assaulting a white woman, although national investigation called into question the story of assault. Lynched in 1898, Bud Hayden was accused of assaulting a white girl. Other lynchings took place in 1906, 1917, and 1922, with the last incident attracting thousands of onlookers.

Early Twentieth Century
During World War I, soldiers from the county were drafted or volunteered for service, and women volunteered to help with the Red Cross canteen at Union Depot in Texarkana. Residents remembered many trains traveling through Texarkana loaded with soldiers. The destinations were training bases or ports where the soldiers would ship out for Europe. A train carrying troops crashed near Garland in 1918, leading to the death of several passengers and crew. Most towns in the county have memorial markers in the city square or in cemeteries.

During the Great Depression, a Works Progress Administration (WPA) office was located for a time in the Victory Hotel in Texarkana. The WPA improved what is now known as the Texarkana Regional Airport with the construction of a terminal building. The Public Works Administration helped construct the Miller County Courthouse.

The period after the end of World War II was marred by the actions of an unidentified serial killer active in the spring of 1946. Known as the Texarkana Moonlight Murders, the killings became the basis for the film The Town that Dreaded Sundown.

Interstate 30 was completed through the area in the early 1960s, and it was a double-edged sword. It brought many new businesses because of increased traffic and more efficient transportation of products to market. On the other hand, it took business away from Texarkana’s downtown, causing merchants to create a “new town” along the I-30 corridor.

Modern Era
By 1968, downtown buildings in Texarkana were deteriorating, and businesses had begun closing. The jails, law offices, and bail bondsmen’s shops remained active, however. Smaller towns such as Doddridge, Fouke, Garland, Genoa, and Spring Bank continued to shrink while Texarkana’s city limits began pushing out on all sides. The Texarkana Chamber of Commerce noted that the city’s metropolitan area—comprising residents and people who drive into Texarkana from the four-state region to shop or do business—had more than 300,000 people in 2005.

I-30 negatively affected passenger railroad traffic. In past decades, as many as nine railway companies served the area, using Texarkana’s Union Depot as the main station. In the twenty-first century, freight trains provide most of the railway traffic.

Most of the county remains rural with farms that produce rice, soybeans, corn, other vegetables, and fruits. Texarkana has many motels and restaurants. Most have space for conventions or regional meetings that generate county revenue. Texarkana is a Main Street Arkansas historic city, and efforts have gotten underway to reclaim the downtown.

Continued growth and business expansion are due, in part, to the Texarkana Chamber of Commerce’s economic development goals: business retention and expansion, diversity in the economic base, continuous building of a skilled and dedicated work force, and partnerships with business leaders that will produce a regional approach to economic development.  The county is served by a campus of the University of Arkansas Hope-Texarkana.

The county gained fame in the 1970s with a series of movies set near Fouke. The Legend of Boggy Creek film series details the exploits of the Fouke Monster.

Famous residents of the county include former congressman Mike Ross, who was born in Texarkana, and artist Thomas Melvin Hinton. Major General Gilbert Richard Cook was also a native of the county, and cult leader Tony Alamo lived near Fouke before his arrest on various charges in 2008 and subsequent death almost a decade later. 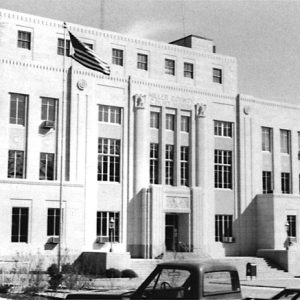