Sensation is a historical community in western Scott County located near Lake Hinkle. Sensation was officially established circa 1916, although people had been living in the area prior to that time. The origin of its name is unknown. Agriculture and timber have contributed to the economy and way of life in the area.

Prior to European exploration, the area surrounding Sensation was a wilderness. Several species of wildlife that no longer inhabit the area, such as elk and buffalo, were present throughout the region. Numerous archaeological sites and burial mounds are located along the banks of prominent water ways such as the Fourche La Fave and Poteau rivers. Archaeological findings have provided evidence of early inhabitants dating to the Archaic, Woodland, and Mississippian periods. Further archaeological evidence has indicated that the people of the Caddo tribe later inhabited the area.

During the late seventeenth and early eighteenth centuries, French hunters and tradesmen traveled west from the Arkansas Post, exploring portions of western Arkansas. These Frenchmen often traversed rivers and streams throughout the region. Several rivers that flow through Scott County were likely named by these French explorers, including the Petit Jean, Poteau, and Fourche La Fave rivers. It is probable that they traveled along the Poteau River or Jones Creek near present-day Sensation.

Settlers began arriving in the area now known as Sensation during the 1850s. The area was settled throughout the early twentieth century.

In 1892, Unity Baptist Church was organized near Sensation.

The Sensation Post Office was officially established in July 1916 by Charles Lynch, who also served as the first postmaster. Three years later, it was discontinued and the mail sent to Oliver (Scott County).

Sensation last appeared on highway and transportation maps around the mid-1930s. The town likely declined due to the consolidation of nearby school districts.

Agriculture exists in the area mostly in the form of cattle and chicken farms. Unity Baptist Church continues to hold services in the twenty-first century and maintains a supportive congregation. Sensation is located on the north side of 960-acre Lake Hinkle, which was completed in 1971 in cooperation with the Arkansas Game and Fish Commission and the U.S. Forest Service and Soil Conservation Service. Many of the residences of the Lake Hinkle community are located in the historical location of Sensation. Likewise, the Little Pines Recreation Area is located where the post office once stood. A rural outpost of the Scott County Telephone Company is located near Sensation in Brawley. The area is served by the Lake Hinkle Volunteer Fire Department. 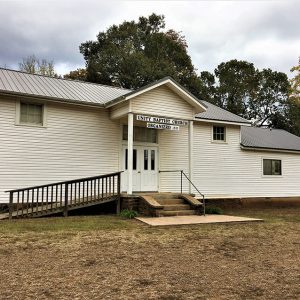