On September 6, 1885, two white men popularly dubbed the “Polk boys”—brothers Henry and Sylvester Polk—were burned alive in the city jail at Murfreesboro (Pike County) after two previous unsuccessful attempts had been made to lynch them. They were in jail for the murder of a peddler named Frank Ward (variously described as either German or Irish), but the event that incited the violence was their success in obtaining a new trial.

Henry and Sylvester Polk, along with alleged accomplice Monroe Kuykendall, were originally indicted for murder in Howard County in September 1884 but obtained a change of venue and had their trial relocated to Pike County. Kuykendall’s case was later separated from that of the brothers. According to a summation of the affair in the April 22, 1885, Arkansas Gazette, Ward’s older brother, living in Prescott (Nevada County), had equipped Ward “for a peddling tour” of neighboring counties. After the time of his brother’s return exceeded a month, the brother reportedly traced Frank Ward’s steps to the house of Almedia Polk on the Muddy Fork of the Little Missouri River in Howard County, where Frank Ward had apparently taken dinner once. After the Polk brothers were arrested, “some buttons, a suspender buckle and some fragments of bone and teeth” were discovered in the remains of a fire nearby.

The brothers, and Kuykendall, were relocated to the state penitentiary in Little Rock (Pulaski County) for safekeeping, pending their trial, as mob violence was expected. The first trial resulted in a hung jury, while a second trial sentenced one brother to death and the other to twenty-one years’ imprisonment. The Arkansas Supreme Court, on June 27, 1885, reversed the decision of the Pike Circuit Court and granted the brothers a new trial. However, as the Southern Standard of Arkadelphia (Clark County) observed, “It will be a hard matter to get up a jury in Pike county.”

According to the Gazette report, the mob that finally killed the Polk boys was the third to have visited the jail with the goal of lynching the prisoners. On August 5, 1885, at about 1:00 a.m., “some unknown parties” arrived in Murfreesboro and fired through the window of the jail, trying to strike the prisoners. They then broke open a local blacksmithing establishment and stole a sledgehammer, with which they tried to “beat in the west wall of the jail.” After more than an hour at this task, they instead “conceived the idea of burning them” and “procured some long splinters, which they lighted and, thrusting them through the bars, set fire to the bedding.” But, although this injured Henry severely, it did not kill either man, and the mob, described as “careless of silence or noise as if their work was entirely legitimate,” departed. Ed Davis of Pike County was later arrested, having been recognized by Sylvester Polk as a member of this mob.

On August 19, at about 10:00 p.m., a group twelve to twenty men again fired into the jail and then broke two holes into the walls of the structure. They were not able to enter the actual cells but, instead, “got on top of the cells and poured coal oil down into the cells and set fire to it, but it could only be made to burn in one cell.” The mob then employed dynamite, leading to “three or four terrible explosions inside the jail.” However, the Polk brothers were unharmed, and the mob’s subsequent efforts to get the keys to the jail cells were unsuccessful, forcing them to retreat.

On Sunday, September 8, a mob visited the jail between noon and 2:00 p.m., “armed and determined to shoot the prisoners, who were locked up in the cage.” The mob, estimated by the Southern Standard at fifty or more people, could not find the right vantage point for shooting the prisoners. Therefore, members of the mob, after forcing an entrance through the outer wall, hauled “seasoned wood from a point near by” and “saturated it with oil, and then set the pile on fire,” roasting the prisoners alive and leaving “only the bare, unsightly brick walls of the jail” standing when the fire was finally extinguished. A brief note in the September 16, 1885, Arkansas Gazette observed: “The Pike county jail burned by the mob in roasting the Polk boys was a new structure, and recently cost the county $6000.”

On September 23, 1885, the Gazette republished an account from the Pike County Sentinel reporting that the Polk brothers had apparently been furnished with weapons by some of their friends following the first attempt to lynch them. As proof, the newspaper referenced shots apparently fired from within the jail during the second lynching attempt, as well as the sound of pistol shots while the jail was being burned down, these apparently being fired by Sylvester Polk, who might have shot himself rather than die by fire.

Reflecting later upon the event, the Gazette insisted that it was not crime itself that led to lynchings in the state but, rather, a “lack of popular confidence that the written law will be enforced against miscreants who murder and ravish and commit other crimes which startle and horrify communities.” The Southern Standard offered a more searing criticism of mob violence in its report on the affair, noting that the hand that applied the torch “would have done credit and received plaudits from the unhallowed lips of the gothic rabble in the days of ancient martyrdom” and describing the mob as “barbaric heathen[s]” who “stood hard by and yelled in fiendish delight, marking the scene and surroundings a hideous pandemonium.”

The lynching led to some criticism of Governor Simon P. Hughes, with at least one letter writer concluding that, knowing the situation, he should have called out the militia to protect the men. State newspapers later reported that the governor had “decided to use every effort to capture” the perpetrators, including sending officers to the county and offering a $200 reward “for the arrest of each and every person in the lynching party.” However, it appears that this effort was unsuccessful. The following month, a white man named Sylvester Churchill was killed by a mob in Murfreesboro in a similar manner. 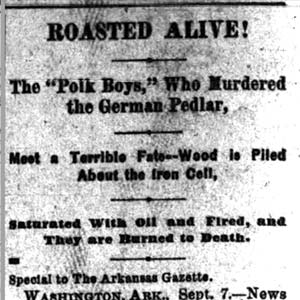